Should the dream ever sour: Dubya's bookie thing

Should the dream ever sour: Dubya’s bookie thing 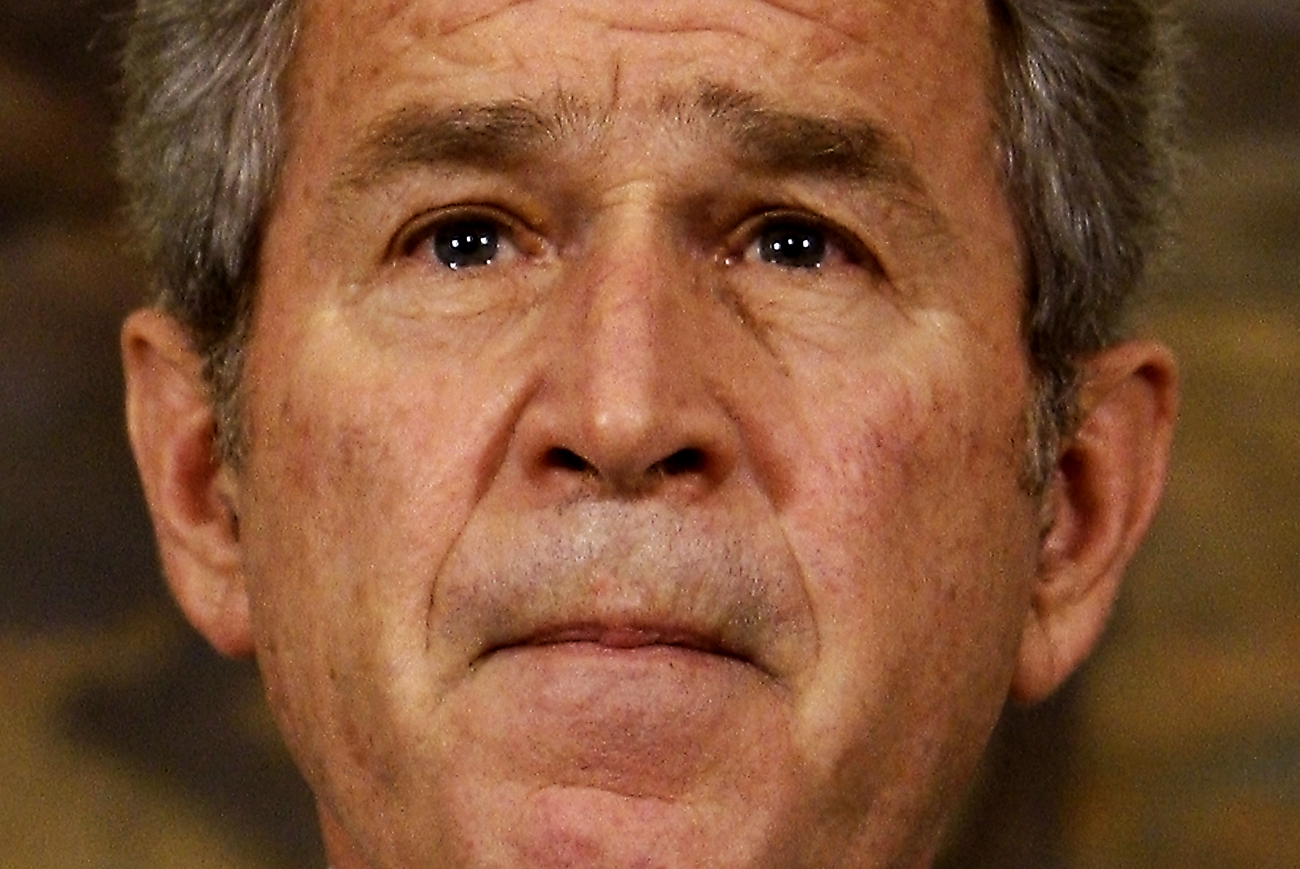 Forgotten for a while after the euphoria of Obama’s election to office, the American Right is now firmly back in the ascendant. The Tea Party is one reminder of their power, Bush’s new memoir Decision Points another. Lest we forget, here’s what the administration of the previous US president looked like. By KEVIN BLOOM.

There’s a well-known picture that can be found in at least a dozen places on the Internet of George W. Bush, then the 43rd president of the United States of America, reading a book upside-down. He’s in a schoolroom next to a girl of around nine or ten, who has hers the right way up and appears to be engrossed in the text. Underneath the picture is the caption: “Rarely is the question asked: Is our children learning?” The quote, of course, is attributed to the same George W. Bush, 43rd president of the United States of America.

It’s perhaps unfair to bring this up in the week that Bush’s memoir, Decision Points, hits shelves across the northern hemisphere. The concern of the Left during his reign that he couldn’t read a book now seems to have been quelled by the fact that he’s just written one. But how much of the book did he in fact write? And, more important, what’s in it?

Let’s start with the second question, specifically with the content he opens with. As the Guardian points out, Decision Points begins with Laura putting something to her husband when the couple were still young and unheralded. “Can you remember the last day you didn’t have a drink?” she asked. Bush instantly answered that he could, yet soon had to admit his inability to count a single alcohol-free day in the previous month. Then he tells the following story, about his drunken 40th birthday party at a restaurant in 1986: “We got louder and louder, telling the same stories over and over. At one point Don [Evans] and I decided we were so cute we should take our routine from table to table. We shut the place down, paid a colossal bar tab, and went to bed.”

Not exactly the way most former US president would choose to open their memoirs, but there you have it. The narrative jumps from there to the very next day, when Bush went running, contemplated God and how his boozing was causing him to neglect his family, and why he therefore decided to quit. This book, one thinks, might’ve made for a great recovery memoir had its author not gone on to become the leader of the free world.

Among the many interviews Bush has given in the lead-up to the release of Decision Points on Tuesday 9 November was the one he gave to NBC’s Matt Lauer, which aired on Monday night. Asked the central question about his time in office – the choice to launch a war with Iraq – he was as unhesitant in hindsight as he was on the job. “You just don’t have the luxury when you’re president. I will say definitely the world is better off without Saddam Hussein in power, as are 25 million people who now have a chance to live in freedom.”

That old word “freedom,” the justification of much in the Dubya years, and the word (if you’ll forgive us for repeating the theme) that author Jonathan Franzen granted mythic status before ripping apart in the novel of the same name. The central line from that book – “The personality susceptible to the dream of limitless freedom is a personality also prone, should the dream ever sour, to misanthropy and rage” – was clearly an allusion to the key personalities in the Bush administration, and if Decision Points is any indication, Franzen appears to have got it right.

Watch: Let’s have some fun – a few Dubya’s bloopers.

In an interview with the UK Times, which is serialising the memoir, Bush defended his administration’s assertion that waterboarding was a legitimate form of interrogation. “Damn right!” he told the interviewer. “Three people were waterboarded and I believe that decision saved lives.” In the book, he writes: “Their interrogations helped break up plots to attack American diplomatic facilities abroad, Heathrow airport and Canary Wharf in London and multiple targets in the United States.”

Maybe so, but the point about misanthropy and rage would seem to stand. Which is why US peace activists are now following the lead of their British counterparts (who did the same thing when Tony Blair’s memoir was released) and launching a campaign to have Decision Points reshelved in the “crime” section of local bookshops. The campaign’s Facebook page, created by the Waging Nonviolence movement, is entitled “Move Bush’s Book Where It Belongs,” and states: “Move Bush’s memoir to the Crime section of the store (the Fiction, Science Fiction, and Humor sections are also applicable), take a picture of your handiwork, and post it to the Waging Nonviolence Facebook page.”

One person who probably won’t be posting a picture of his handiwork to this page is Christopher Michel, the man hired to work Dubya’s notes into a full-length memoir just three days after the former president’s final term ended. At the age of 26, Michel was already Bush’s favourite speechwriter – the UK Telegraph demonstrates how he loved the man: “On Mr Bush’s last full day in office, his loyal speechwriter drew a wistfully nostalgic line under his part in the administration in an email to his family and friends. ‘It’s been quite a ride. After arriving as an unpaid intern in June 2003, I met my wife; got married; became the director of speechwriting; and traveled the world on Air Force One,’ he wrote. ‘I owe more than I can repay to the 43rd president of the United States, a man of courage who will fare well in history.’”

But then history, Michel should know, tends to decide for itself. DM

Read more: “George Bush book: ‘We paid a colossal bar tab, and went to bed’” in the Guardian, “Move Bush’s Book Where It Belongs” Facebook page, “George W Bush’s memoirs: the loyal aide who ghost-wrote Decision Points” in The Telegraph.

Photo: The then U.S. President George W. Bush comments on the automaker’s industry in the Roosevelt Room at the White House in Washington, December 19, 2008. REUTERS/Jim Young