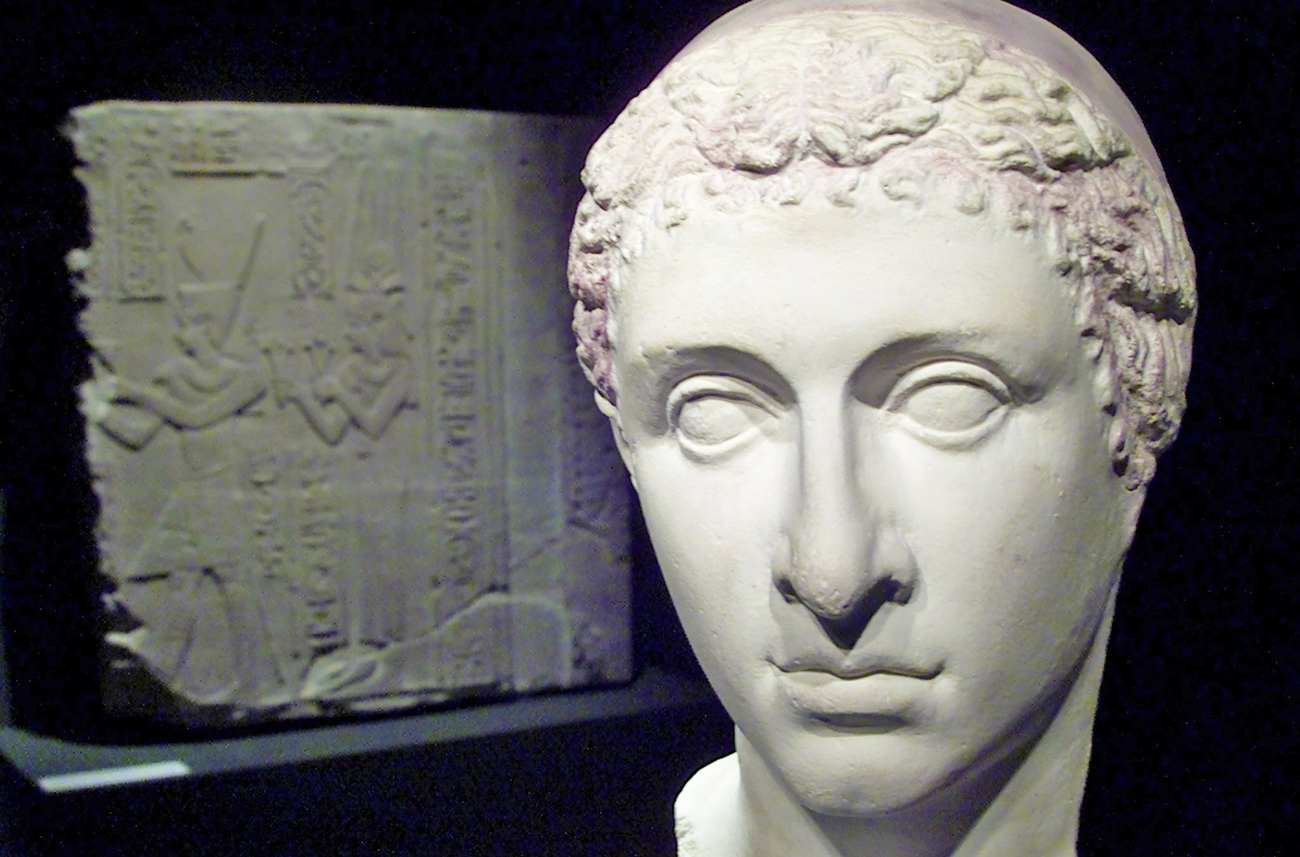 After inspiring a plethora of books, movies and plays in the 20th century, an Egyptian queen who died more than 2,000 years ago has just arrived in the 21st century with force. Both Angelina Jolie and Catherine Zeta-Jones are to play her in forthcoming biopics, and a new biography has been hailed as a masterpiece. But can we ever know the real Cleopatra? By KEVIN BLOOM.

The enduring interest of storytellers in an Egyptian queen who died in the year 30 BC has always seemed more than understandable. Cleopatra VII Philopater had it all: unsurpassed beauty and intelligence (she spoke nine languages), love affairs with the most powerful and charismatic men of her day (Julius Caesar and Mark Antony), and a political life of such intrigue that Machiavelli would’ve been hard-pressed to keep up (at the age of 21, returning to her palace from exile concealed in a sack, she convinced the Roman Emperor she found there – Caesar himself – to install her as Egypt’s sole ruler). There’s also the fact that she was married to her brothers Ptolemy XIII and Ptolemy XIV, that she represented herself in lavish public ceremonies as a reincarnation of the goddess Isis, and that she killed herself by inducing an Egyptian cobra to bite her. For storytellers, it really doesn’t get any better.

Which is why William Shakespeare took on the subject in his play Antony and Cleopatra, why Jules Massenet wrote an opera in four acts called Cleopatre, and why the 1963 film starring Elizabeth Taylor cost so much it almost sank the studio. It’s also why the Cleopatra industry, after a lull of a couple of decades, is currently undergoing something of a revival. The subject of three recent books and an exhibit at the Franklin Institute in Philadelphia, the last person to rule Ancient Egypt as a pharaoh is about to be portrayed by Angelina Jolie and Catherine Zeta-Jones in big-budget Hollywood movies.

At the moment, the focus of most of the media attention is on Stacy Schiff’s new book, Cleopatra: A Life. As a biographer, Schiff probably had the hardest task of the above players – the main item in the New York Times’s Sunday Book Review on 7 November opened with these words: “Papyri crumble away. What remains of her home is 20 feet underwater. She died before Jesus was born. Her first biographers never met her, and she deliberately hid her real self behind vulgar display. A cautious writer would never consider her as a subject.”

But Schiff, in the estimation of the reviewer, is not a cautious writer, and her daring in tackling the subject appears to have paid off. In Schiff’s own words, her mission was to “restore context,” to interrogate the “encrusted myth” created by men for whom “citing [Cleopatra’s] sexual prowess was evidently less discomfiting than acknowledging her intellectual gifts.” The reviewer explains: “Lucan, Appian, Josephus, Dio, Suetonius, Plutarch — the poets, historians and biographers who initially depicted Cleopatra were mostly Roman and all male, writing, for the most part, a century or more after her death with the intent to portray her reign as little more than a sustained striptease.”

Of course, where Cleopatra: A Life attempts to put the clothes back on the queen, it’s a near certainty that Hollywood will try take them off again. In mid-October it was reported that Avatar director James Cameron was in negotiations with Sony Pictures to direct the Queen of the Nile biopic in 3D, with Jolie on board as the star. Producer Scott Rudin bought the rights to Schiff’s book last year, and the temptation to gloss over the intellectual bits and focus on the sex and intrigue is probably going to be overwhelming. There is, after all, quite a strong sub-text in the fact that the studio decided to fast-track the project after screenwriter Brian Helgeland wrote what was being described as “a brilliant script deserving of epic treatment” all about “what the Romans took from Egypt”. Jolie (un)dressed for the desert heat, flanked by her nubile young handmaidens, taking on the might of Rome – can it be any other way?

And while it was reported on the weekend that Cameron has since dropped out of the running – the rumours are that he’ll be too busy directing Avatar follow-ups to do anything else – this news shouldn’t change things much. Sony Pictures knows what sells; by the sounds of it, they’ll be investing hundreds of millions in the film and they’d no doubt like to get their money back. Hopefully, though, they’ll also ingest some of the subtlety that seems to have been as much a feature of the book as the life itself. As Michael Korda writes in his review of Schiff’s biography for The Daily Beast: “[Cleopatra’s] aim was to preserve Egypt’s independence and her own rule, to dominate the eastern Mediterranean (in just those areas which are still the source of strife today in the form of Palestine, Lebanon, Syria and Iraq), and to make of Rome an ally and a partner, rather than allowing her to acquire Egypt as a colony. In this particular ‘Great Game,’ Cleopatra played her hand deftly, until the very end, when she paid the price for having chosen the wrong Roman as her lover and general.”

Clearly, it’s a story that can be told and interpreted a number of ways. New Yorker writer Judith Thurman, in a podcast on the magazine’s website, attempts (somewhat unsuccessfully) to explain the difference between the real Cleopatra and the imaginary one. A self-confessed “Cleophile,” Thurman says she first became interested in the ancient queen after watching the Liz Taylor movie, and then talks about “the mosaic of unreliable clues” that gives the modern world its image of her. “And the mosaic nature, the jigsaw-puzzle nature, is in itself – for someone who loves puzzles – very attractive. Can you put the pieces together? And can you find something that has been overlooked?”

After more than 2,000 years, it seems these are questions that have yet to lose their allure. DM

Photo: A bust is showing Queen Cleopatra at Berlin`s Egyptian museum October 26, 2000. Researches of the famous museum have recently discovered the handwriting of Queen Cleopatra, reading “it will be so” on a piece of papyrus. The papyrus contains information about an order giving tax benefits to the Roman citizen Publius Canidius and dates 33 B.C. REUTERS.