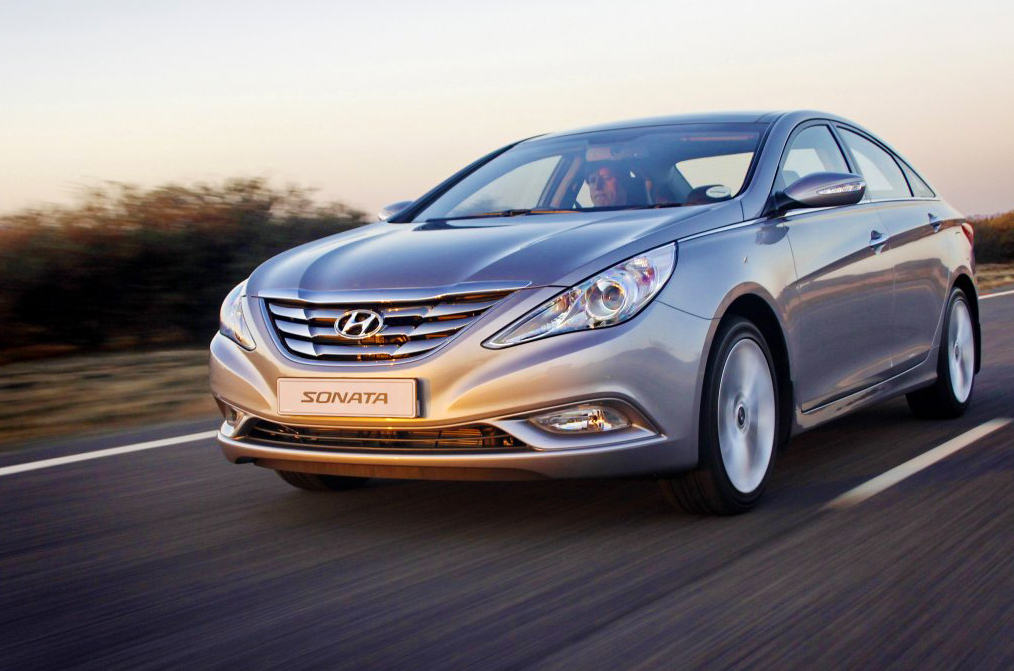 There was a time when the only classy aspect of the Hyundai was its classical music-inspired name. The rest was neither classic, nor classy. But the Sonata did earn itself a reputation for space and value. And it didn’t cost the earth, either. By comparison, the new Sonata looks the luxury car part. But is it good enough to deserve the premium moniker its makers believe it deserves? By DEON SCHOEMAN.

Hyundai is particularly proud of its new Sonata sedan – and at face value, one can understand why. It’s a striking sedan, with a powerful presence that attracts a lot of attention wherever it goes.

So bullish is the Korean marque about the prospects of its new midsized sedan it wants to tackle the premium sector head-on. The question is this: Is that pie in the sky, or a viable reality?

The all-new Sonata is arguably the first “big” Hyundai that really looks the upmarket part. Previous Sonatas may have been capable cars, but they weren’t exactly aspirational. Instead, they offered a decent, spacious, comfortable motoring experience, relying more on value than aspiration to attract buyers.

By comparison, the new Sonata represents a big step forward. Rather than opting for generic sedan lines, the Korean has a rakish, aerodynamic silhouette, emphasised by clear style lines. The front is dominated by a heavily chromed grille that looks too garish in our opinion, but at the very least confirms the sedan’s Hyundai identity. The bonnet has a power bulge that’s carried through to the grille, while the a lower air intake is framed by fog lamps on either side.  Side on, it’s the shoulder line that is most prominent, while 18-inch alloy wheels are standard.

By comparison, the rear is almost feminine, thanks to its smoothly tapered shape, crowned by a short, raised deck. In stark contrast to the current design trend, the exhaust tailpipe is concealed.

But here’s the rub: as much as the Sonata turns heads and expresses an upmarket image, it’s not original enough to convince – at least not in our opinion.

There’s a certain Mercedes-Benz E-class influence that’s at its most apparent when viewed side on, while some of the detailing is simply too fussy. Still, it’s an attractive sedan.

Talking of which, the Sonata finds itself competing in a particularly tough segment. Medium sedans have been steadily losing ground for 15 years or more, simply because they lack the cachet and the emotional appeal of smaller, premium-brand machines. That leaves the Sonata in exactly the same boat as the Honda Accord, the Mazda6 and several other, similar-sized sedans. These are all cars specced to the hilt and priced to sell. And yet they struggle to compete effectively against the likes of Audi, BMW and Mercedes-Benz.

As a result, the Sonata’s price tag is its most compelling sales tool. And that’s exactly what Hyundai would like to prevent, because it believes that keen pricing is only one part of a bigger, more compelling picture.

For us, it’s the drivetrain that should enjoy priority, and that deserves high praise.  It combines a high-efficiency 2,4-litre petrol engine with a six-speed automatic gearbox. The in-line four is good for 131kW at 6,000rpm, while the 228Nm of torque is on tap at 4, 000rpm. But here’s a bit of trivia: Both engine and transmission were designed and developed in-house by Hyundai and are produced by the Korean giant.

It’s a feat that underscores the increasingly sophisticated engineering capability of the auto maker, and confirms just how far the Korean marque has progressed since the days when it relied solely on licensed, previous-generation technology from other brands.

The gearbox, in particular,  is a smooth and refined unit that doesn’t hunt between ratios. The shift paddles work well, and it presides over a good spread ratio. However, the gearshifts remain slow by modern standards, and power take-up is not incisive enough.

The drivetrain isn’t the only example of advanced engineering. The new Sonata rides on an all-independent suspension that combines a front  MacPherson strut configuration with a multilink rear layout. The ride is cosseting, and can even feel overdamped at times. But if it’s comfort and convenience you’re after, the interior design is likely to be a welcome surprise. In this top-flight  Executive model, leather is standard, as is one of those exhaustive lists of features that includes just about everything.

The electrically adjustable seats are well-shaped and comfortable, and while the comprehensive switchgear array can look busy at first, the layout is intuitive enough. Clear analogue dials dominate the instrument binnacle.

The full-house safety feature set includes dual front, side and curtain airbags, while the all-disc braking system is fitted with ABS anti-lock control, as well as electronic brake force distribution, and emergency braking assistance. There’s even a yaw sensor to counter understeer.

The Sonata was never conceived as a performance car, but as the figures show, it’s not scared of being caned. With a power-to-weight ratio of 92kW/ton, the 0-100 sprint time of 9,5 seconds is admirable, while top speed comes to 208km/h.

However, as Hyundai points out, the new Sonata is also an efficient car. Fuel saving measures include a gear shift indicator, and an alternator that decouples when the battery is fully charged. The claimed combined-cycle fuel consumption comes to 10,8 litres/100km, which is pretty good for a large, spacious sedan. The boot aperture is a little restricted, but when push comes to shove, you can slot in more than 300 litres of cargo into that boot.

Driven with vigour, the Sonata feels less planted than expected. The steering is over-assisted, and the front suspension is too soft, which translates into understeer when pressing on. However, the Stepway is stable at high speeds and covers ground very swiftly.

The new Hyundai Sonata adds further momentum to the improvements introduced by the iX35 SUV. It looks smart, feels luxurious and delivers on the dynamic front, too.

The gearbox may not be the quickest, and the cockpit ergonomics are a little busy, but the rest of the Hyundai package is convincing, while the keen asking price adds value to the overall equation, too. DM