Analysis: The great Times UK paywall experiment and why...

Analysis: The great Times UK paywall experiment and why we shouldn’t learn from it 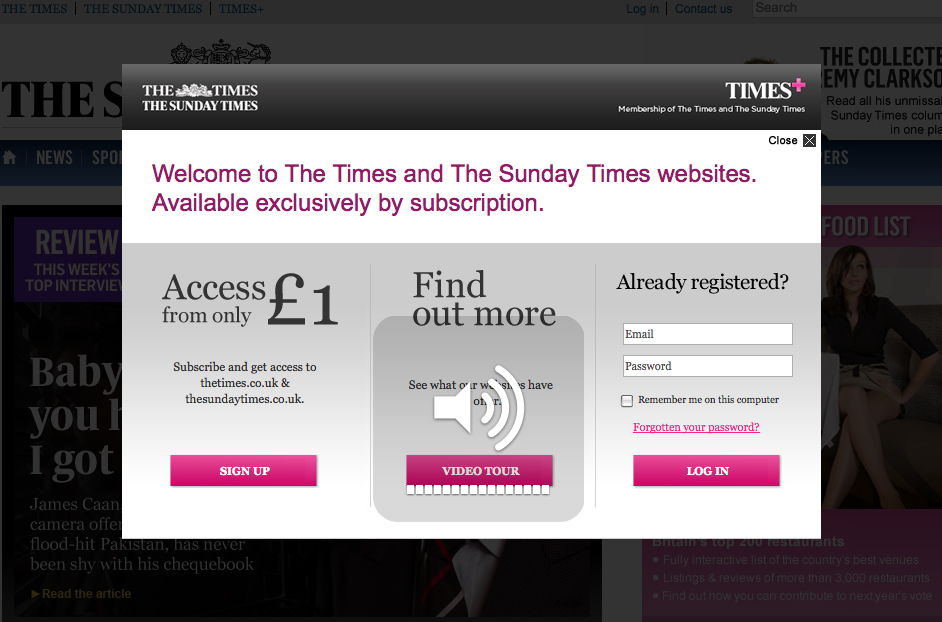 Q: How much money is The Times online making? A: Who cares. There's been much media speculation over the last couple of days as to the exact amount of cold hard cash, and the precise number of subscribers, The Times paywall is actually generating. But this debate is missing the point that The Times' digital editorial is still a function of dead-tree-publishing economics. What's going to happen when digital revenue is no longer supplementary, but the only source of income? By THERESA MALLINSON.

When News Corporation announced earlier this year that it would be erecting a paywall around The Times and the Sunday Times from July, subs the world over couldn’t resist the obvious headline: “The Times they are a-charging”. The question is, did News Corp head Rupert Murdoch actually take a moment to recall Bob Dylan’s lyrics? We’re thinking especially of the last verse:

“The line it is drawn

The curse it is cast

The slow one now

Will later be fast

As the present now

Will later be past

And the first one now

Will later be last

For the times they are a-changin’.”

Yup, the order is rapidly fading alright. Which is why the media fuss about The Times finally releasing its paywall numbers is kind of besides the point. But let’s take a quick look at the figures anyway:

Well, the above were the bolded bits in the press release; The Times placed rather less emphasis on the fact that the monthly subscribers include people who subscribe to the newspaper’s iPad app and Kindle edition. With such fluffy numbers, (as Beehive City’s Tim Glanfield termed them), it’s really impossible to figure out how much more, or less, money the online version of The Times is making than before it erected the paywall. The Guardian’s Dan Sabbagh suggests a decline in revenue in the low millions, while Eric Schonfeld from TechCrunch posits a gain in this region. Remember, given the nebulous numbers, this is all guess-work.

But, for the sake of argument, let’s just go with Schonfeld’s take. Say The Times online has, in fact, increased its revenues post paywall. Schonfeld suggests that The Times is making about $9.6 million in online subscriptions, compared with $2.4 million it gained in online advertising revenues when it was free. That would mean the paywall has in fact paid off, to the tune of $7.2 million. Wow, a whole $7.2 million. But that’s nothing more than the small change from small change to Murdoch. More to the point, it’s certainly nowhere near enough to fund the editorial operations of newspaper version of The Times, from which the online version derives its content.

Forget about whether the paywall experiment has gained or lost News Corp a few million or so; forget about trying to get to grips with the fluffy numbers. There’s only one real question here: What’s going to happen when people say their final goodbyes to dead-tree media? There’s little point in trying out funding models for online publishing that provide some nice pocket money for their owner. Soon enough, online papers are going to have to start paying their own way.

With this in mind, rather than endless debate over what the figures actually signify (or what the figures actually are in the first place) is a straw man. More apposite is Ross Dawson’s Newspaper Extinction Timeline (for every country in the world), launched on Sunday. As Dawson points out in the notes accompanying his timeline: “This schedule for newspaper extinction shows best estimates given current trends. The timeline is intended to highlight the diversity of global media markets and stimulate useful strategic conversations.”

Dawson’s not claiming psychic powers here, but merely offering a guide as to where media owners should direct their attention. Significantly, the UK’s extinction timeline is 2019 (locally, metropolitan South Africa has a longer lifeline for its newspapers, with extinction forecast only in 2037). That gives Murdoch just nine years to come up with a cunning plan.

Or maybe, he already has. Seamus McCauley, writing on his Virtual Economics blog, suggests the paywall isn’t about The Times, but about News Corporation. The Times lost almost ?90 million last year. So, the fact is the physical paper can’t even support the cost of its editorial operations and the paltry help its online cousin from means very little.

Perhaps, McCauley contends, Murdoch’s long-term vision is something completely different. He could be looking at synergies between The Times’ web presence and BskyB (that’s Sky to you and me), which made a profit of ?855 million in financial 2009.  Subscribers could sign up to The Times as part of their “TV” package. If this is indeed the case, then that’s a whole other story. But what it does mean is that media owners and commenters looking to learn lessons from the great Times paywall experiment are, well,  wasting their time.

Unlike Murdoch, not all newspaper owners have monolithic media empires on which to conduct their experiments. Rather than watching Murdoch’s every move like a hawk, media executives’ creative energies would be far, far better spent on finding their own ways to create self-sustaining online publication models. It’s really not a rocket science. DM