Analysis: Zuma and his new deck of cards 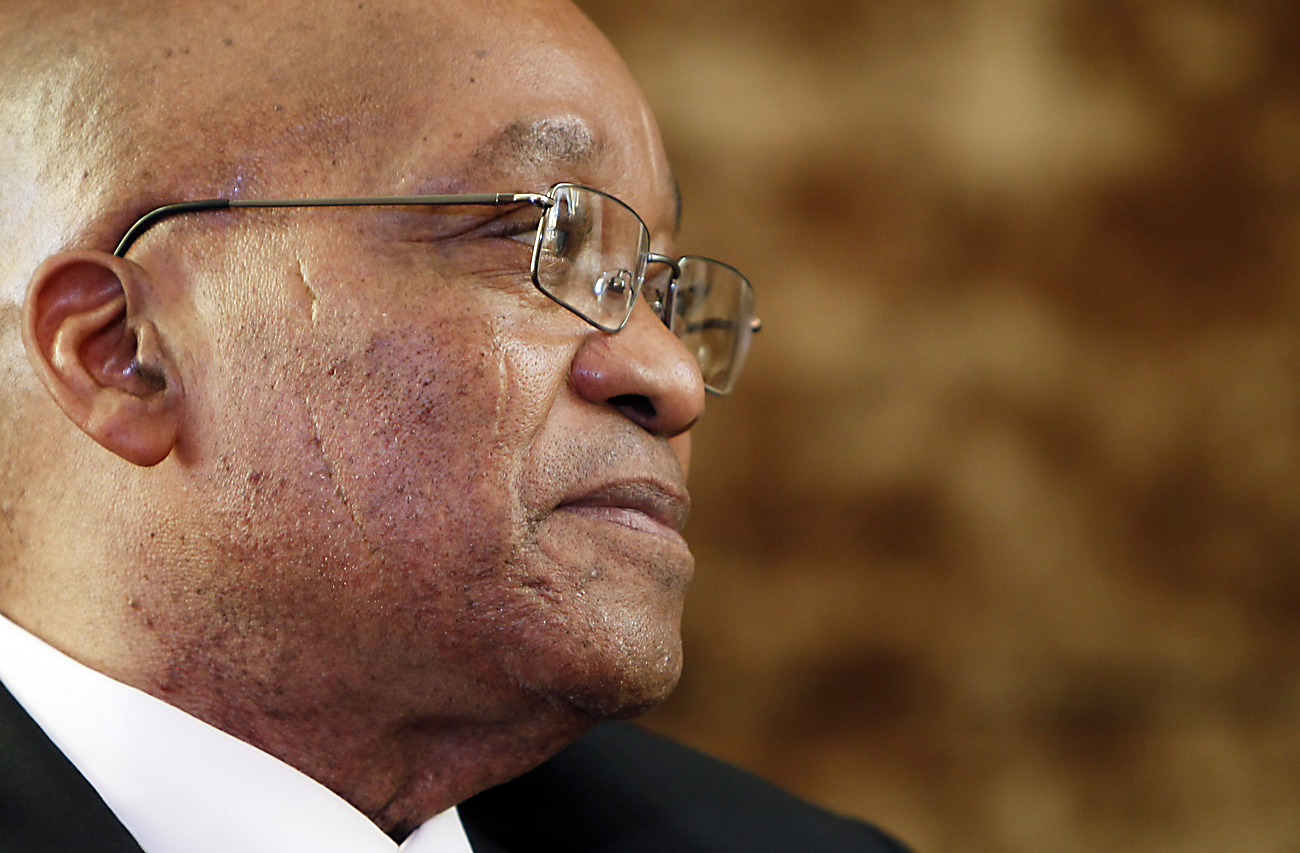 There are moments in politics when the unexpected happens; when you literally go “WOW!”. By reshuffling his cabinet, President Zuma provided us  with just such a moment. After a lengthy wait (at three-and-a-half hours it was verging on ANC Youth League territory) he came, he announced and he left - SA reeling. By STEPHEN GROOTES.

The big shock, obviously, General Siphiwe Nyanda (now retired, both as a general and minister of communications). It was left field, and no doubt even the general’s best intelligence let him down here. Why? The corruption allegations that just wouldn’t go away? The too-public support for Siyabonga Gama and his complaints about Transnet?  Or just his dismissive attitude generally? Maybe, who knows, the fact that he simply wasn’t doing his job? Possibly all of the above. But Nyanda is one of those people reporters habitually call “powerful”. It’s because he’s on the ANC’s national working committee (which is due to meet today, as it happens) and he’s not afraid of throwing his weight around. Remember the “Charge Vavi with discipline” headline, he’s probably the guy responsible for that. So Zuma, to dispose of Nyanda, even temporarily, had to have lots of backing. And he must have really wanted to do it.

But sometimes, someone in political life gets fired not because they’re doing the wrong thing or are even dof, they just happen to symbolise something. We wonder if that was the case here. That Nyanda symbolised everything the public (or ANC delegates at its recent national general council) sees as wrong with the ruling party. And the best way Zuma could show he was serious about fighting corruption (and let’s face it, it is rather difficult to take him seriously at times) is to get rid of a symbol of corruption. Doesn’t matter whether he is or isn’t. It’s the political perception that matters here.

The look on his face must have been quite something. Thunder promising lightening probably sums it up best. A man who can be quick to anger, but with military bearing is usually someone you’d like to avoid telling bad news. Giving offense is worse. And Zuma did both. While we think it’s protocol for the president to meet a sacked minister in private, if we’d been Zuma, we’d have taken Gwede Mantashe along, just in case.

The other headline-grabbing sacking is Barbara Hogan. She never seemed to have Zuma’s full backing, and the fight over the parastatals is probably going to claim more scalps before it’s done. She followed the law, and told Parliament that the boards of parastatals, “hell yes, they must govern”. Seems there was a price to pay for that.

But her job isn’t really about parastatals, she was really Eskom minister. Her replacement, Malusi Gigaba has, on paper, the right political pedigree. A former Youth League leader, a deputy minister for some time. But he was also the last Youth League leader to back Thabo Mbeki. As such, he was hardly in-sync with the Zuma project. There’s also the little matter of his tenure as deputy minister of home affairs when it started to sink into the quagmire under Nosiviwe Mapisa-Nqukula (who’s still in her job at correctional services, amazingly). So he can hardly claim to be a good technocrat. Frankly, we’re a little puzzled and quite a bit worried here. As we said before, parastatals could bring this country down one day.

On paper, Paul Mashatile appears to be a winner here. He’s now gone up a notch to arts and culture minister, from being the deputy. But this ministry is hardly an agenda-setter. He’d still prefer to be Gauteng premier, we presume. Now all he gets is the ministry that seems to be full of traps for the unwary. He’s also likely to be fuming at the appointment of Gwen Ramokgopa as deputy health minister. He spent the weekend, in his role as Gauteng ANC chairman, planning a provincial cabinet reshuffle. While no one will confirm this, he’d have liked the deputy Gauteng ANC chairwoman – Ramokgopa – to be in the provincial cabinet. Now she’s obviously unavailable. But the citizens of Tshwane/Pretoria will be relieved. ‘Cos she’s been a disaster as mayor. Let’s hope good Aaron Motsoaledi will be able to contain any damage she may cause at health department. Hardly an inconsequential department to show a useless politician.

Politically, Zuma’s been very clever here. He’s drawn the sting from Mashatile, promoted him, but kept him away from what he really wants, kept him in a job that’s pretty thankless, (And doesn’t have much access to big budgets – Ed) and made sure he doesn’t have too much time on his hands to build his Gauteng powerbase. (Of course, the arts and culture in this country may suffer, but surely it is fair price to pay for a really good political ploy? It’s not like arts and culture are important for South Africa’s future – Ed)

The same has happened to Fikile Mbalula. In terms of ministries that matter, the sports ministry is next to Pofadder. Can you name the previous minister? It was Makhenkhesi Stofile. The invisible man that was nowhere to be seen during the World Cup. He’s out. Mbalula will bring his own brand of quiet subtlety to a portfolio that basically means asking the SABC why it can’t broadcast live football or boxing, and trying to be out-rude others in dealing with the SA Rugby Union. We wish him luck. Oregan Hoskins and company have shown they’ve got their own political and legal smarts, and everything else is pretty thankless. Mbalula will claim he’s now a minister, but he’s still out of the security cluster. At least there won’t be such an urgent need to separate him and Nathi Mthethwa all the time. We think Mbalula will be pretty annoyed at this.

One of the longer-serving ministers to go is Membathisi Mdladlana. He’d been at labour for aeons. It was probably time. But Mildred Oliphant who takes his place is probably not going to enjoy dealing with unions too much.

The scale of this announcement is such that Zuma announced 17 deputy ministers yesterday. This is a wholesale shake-up. The ones to watch are Ngoako Ramathlodi at correctional services (he always wanted justice and will miss the portfolio committee) and Enoch Godongwana at economic development. He’s got some power and influence, and could be there to keep a close eye on Ebrahim Patel. All in the name of fraternal tripartite alliance love, of course.

There will be questions about the lateness of the announcement. It was due at 2:30pm and happened at 5:55pm. Frustrating as that is for our politerati, it’s important to remember the announcement itself was probably the easiest moment in Zuma’s day. Everything else would have been dealing with cross former cabinet ministers. The politics must have been quite something, and there’s always bound to be a hitch. The presidency isn’t the smoothest machine around at the moment, and quite frankly, when you deal with things as tricky as a reshuffle and one as massive as this, well, delays will happen. But we do think the presidency, and the ANC owe us all an apology. To claim two weeks ago that the media had evil intent by speculating on a reshuffle is plain nonsense. Say sorry. We know you like it when we apologise.

And just in case you forgot, there are two main stories here.

But perhaps the second one is the more important. We have a new person at the helm. The Zuma of the past year appears to have disappeared. He’s been replaced by a man of action, someone unafraid to take action. Someone who’s realised that to make an omelette you have to break some eggs. The Zuma we knew pre-NGC has been replaced by someone who is in charge. He’s also not afraid to do the unexpected.

You’ll have to be pretty brave to put much money on what’ll happen in 2012. DM

Women, Children and Persons with Disability