Abu Dhabi builds monumental temple to the religion of F...

Abu Dhabi builds monumental temple to the religion of Ferrari 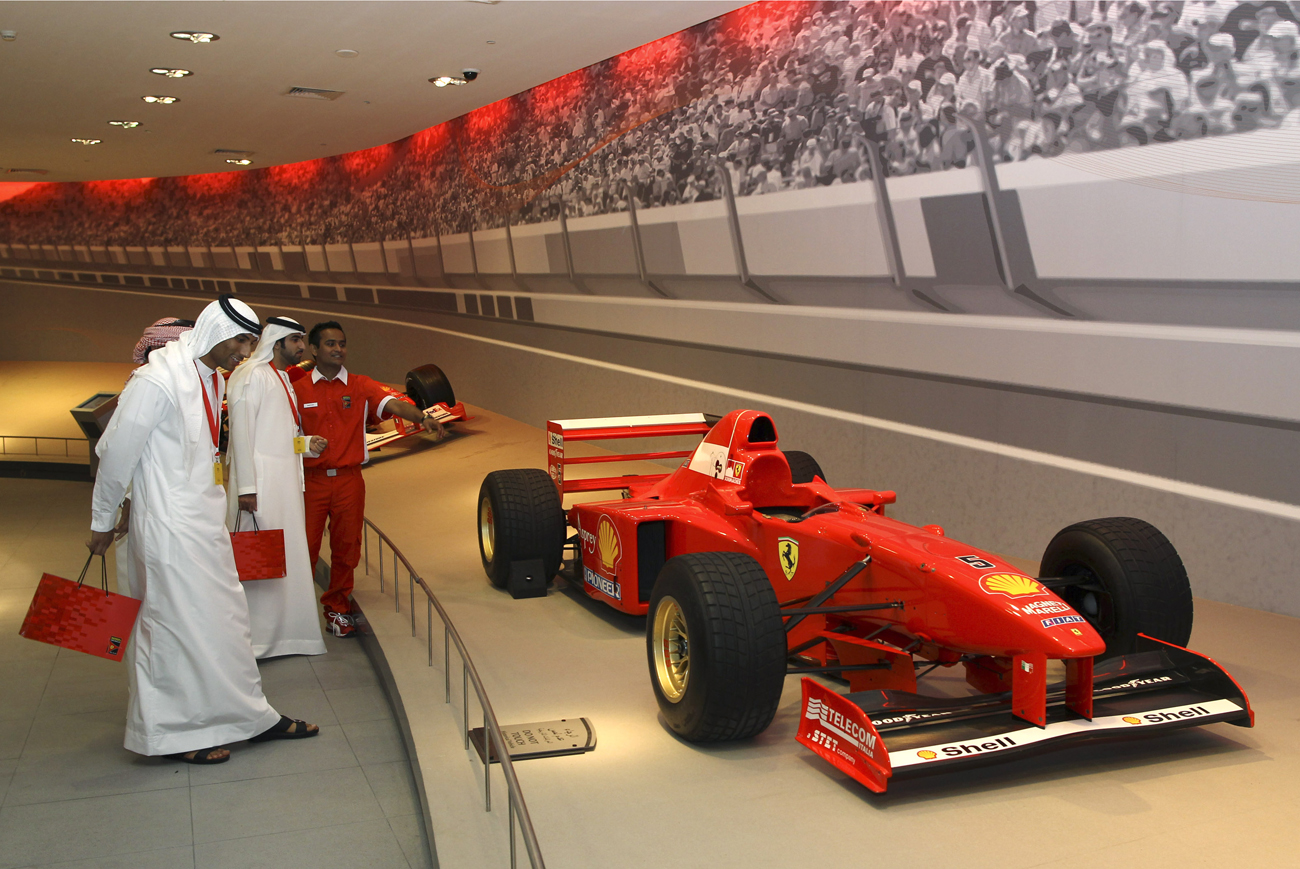 Judging by the way Abu Dhabi is spending money, you’d think there was no recession. The city is ready to unveil the world’s largest indoor theme park - and greatest shrine to Ferrari (cue Jeremy Clarkson delay) … in the world!  By SIPHO HLONGWANE.

It was going to be launched on Wednesday, but the death of Sheikh Saqr bin Mohammed Al Qasimi, the ruler of Ras al Khaymah (one of the seven emirates that comprise the United Arab Emirates) on the same day prompted a postponement. An announcement as to when the launch will be is expected soon.

Ferrari World Abu Dhabi is huge. Its 80,000m2 structure houses 12 Ferrari-themed attractions, including a 240km/h rollercoaster that snakes and weaves for 2km and a tower ride that shoots 62m into the air giving its passengers the G-force joy that Formula One racing drivers experience in corners. If your joints can’t handle that sort of thing, there’s the largest collection of classic and modern Ferraris outside of the manufacturer’s Italian headquarters, and a dive inspired by the fabled Mamma Rosella drive. It has the obligatory Ferrari goods store. The roof sports the largest “Prancing Horse” logo ever created (66m in diameter).

The park was built on Yas Island by Aldar Properties, a real estate development company that has scored itself a series of lucrative real estate deals around the UAE over the years. Reuters said in a report, “The capital of the United Arab Emirates and the seat of most of the Gulf Arab country’s power and wealth was for years known to the world as the more sober neighbour of trade hub Dubai, which made its name with extravagant real estate projects, outlandish tourist attractions and luxury shopping.”

However, when the real estate bubble burst, after the collapse of several key Wall Street banks, the rapid, real-estate-boom-fuelled growth of Dubai ended. With Dubai now groaning under a $26 billion debt, Abu Dhabi clearly has ambitions to wrest the mantle of UAE’s playground from its neighbour. And unlike Dubai, Abu Dhabi has plenty of oil to back up its economy.

As the world’s largest car-centred park, they couldn’t have chosen a better theme than Ferrari. The car is so much more than a car. It’s an aspiration. Everything about it, from its romantic beginnings to its elegant, understated designs to the Prancing Horse, exudes a love of life. Ferrari also bears the extraordinary record of being the only car manufacturer that has never shelled out a single cent for ordinary advertising (why would they, when all their cars are sold in advance?). The Scuderia has an enormous cult following, unrivalled by any other car brand.

As Jeremy Clarkson says, Ferrari is all about heart and soul and passion and flair. The things that really matter.

It’s not much of a surprise then that this flamboyant project bears the livery of the Scuderia. Ferrari chairman Luca Di Montezemolo certainly approves. “Ferrari World Abu Dhabi is a great project among friends driven by a common passion. The people of Abu Dhabi, in particular Aldar Properties, have done an incredible job creating this spectacular theme park, where you can feel the Maranello spirit,” he said.

Ferrari World certainly ticks all the boxes for Abu Dhabi and other UAE cities – the Arabian peninsula’s love of racing, the F1 jet set, all that oil, not to mention the thronging hordes of well-heeled Ferrari fans.

Maybe that’s where the Great Recession has screeched to a stop. DM