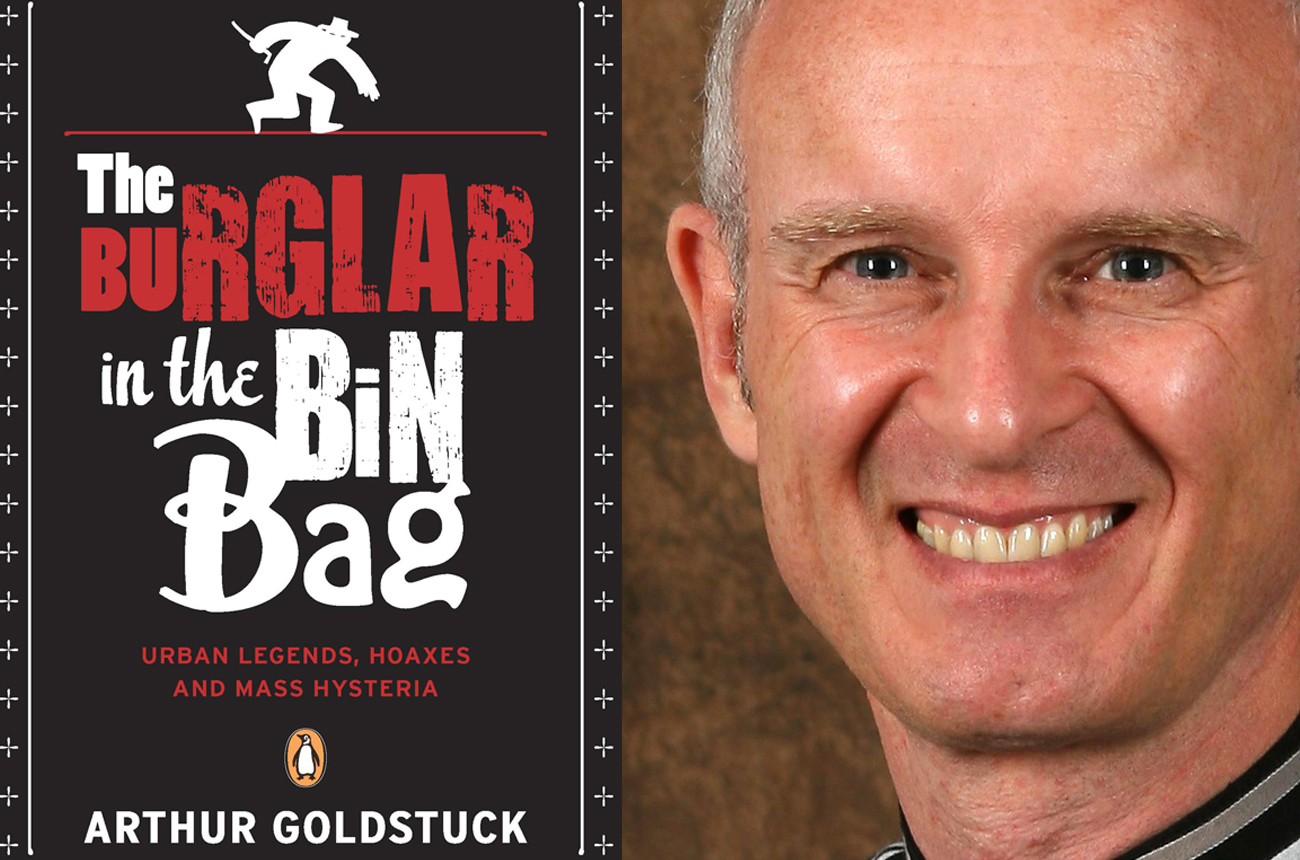 We’ve all heard the story about the murderous madman with a hook hand that stalks lovers’ lane or received an email warning us that a burglar could be lurking at the end of our driveway, hidden by our garbage bags. Urban myths and legends say much about how our collective psyche works, as Arthur Goldstuck’s new book on the subject reveals. By MANDY DE WAAL.

Arthur Goldstuck was in boarding school in the Free State when he first heard the story of the murderous lunatic with the hook hand who had escaped from the mental institution.

You know the story. The one about the couple parked in lovers’ lane listening to the radio late at night. The boy’s getting amorous, the girl’s half heartedly resisting his advances when the music stops. An urgent announcement plays over the airwaves.

A crazed man has escaped from the local mental asylum. He’s a killer and can be recognised by the hook where his one hand should be. The girl gets nervous and wants to go, the boy wants to stay, but the girl wins and in frustration the boy revs the car and exits lovers’ lane at high speed, his wheels churning up the earth as he leaves.

At the girl’s house the boy comes to open her door, but screams and passes out cold in front of her before even opening the door. Startled, she starts hooting the car’s horn. Her father rushes out of the house, takes one look and gasps. He rushes round to the driver’s side and tells his daughter to come out of the car that way, and not to look out of the passenger window.

Of course she does and there, hanging from the handle of the car door, is the bloodied stump of what used to be an arm. At the end of it a hook wedged into the door handle is clearly discernible in the moonlight.

“The version I heard of the story was very real, and very local and it was only when I went to university and was living in res that I started to [find] really something fishy about the story. Most of the guys with me came from out of town, and I then heard the story had occurred elsewhere which made me suspicious about the tale, but I still didn’t quite twig on what it was,” says Arthur Goldstuck. Well known for digital research which is his day job, Goldstuck is the author of 18 books, six of which focus on local urban myths and legends. His sixth book has just been published by Penguin and is called The Burglar in the Bin-bag: Urban legends, Hoaxes and Mass Hysteria.

“I got into urban myths and legends and started writing about them precisely because I came from a small southern Free State town which made me very susceptible to these stories. I had an intense sense of being disconnected from the world and because of this an intense need to understand what was happening in the world.” Goldstuck says a lot of the stories that were used to explain the world to him later turned out to be urban legends. “As I discovered the concept of urban legends it was suddenly made it clear to me that there were layers of understanding of the world.”

A moment of clarity came through reading a book called The Vanishing Hitchhiker by Jan Harold Brunvand, which was loaned to Goldstuck by that other local writing legend Gus Silber. “Brunvand is Mr Urban Legends in the United States. Gus loaned me the book and said that I would enjoy it, but not only did I enjoy it, it was a revelation to me,” Goldstuck says. “I suddenly saw that so many of these stories that I had heard and believed were not only true, but they represented a particular phenomenon in popular culture and why that was compelling to me. This was an area of journalism that appealed to me because of the complexities and the intricacies of popular culture.”

Goldstuck started collecting local urban myths and legends, and investigating the sources of these stories, and made an interesting discovery in the case of the story of the deranged murderer with the hook hand. “I discovered that there were many precursors to that particular story, one of them being highway men during medieval times that held up coaches.”

In one story, a victim of one such robber had saddlebags hanging from his horse. Upon seeing the highwayman this man spurred his horse on to race away from danger and the highwayman, who had a hooked hand, latched on to the saddlebags. “The story goes that the leather the saddlebags were made from was so strong that it ripped the robber’s arm off. I found it fascinating that an urban legend can evolve over so many hundreds of years and still essentially remain intact,” Goldstuck says. In the old days the story was a warning to people transporting money through forests on horseback, but in modern times it is used as a social warning about the dangers of going to lovers’ lane.

After reading The Vanishing Hitchhiker Goldstuck journeyed to the US to research urban legends, and wrote a long letter to Brunvand. “A few weeks later after I got back to South Africa I got a letter back from Brunvand, a very warm and encouraging letter saying that I needed to write a book on South African urban legends. Here we are six books later and I still correspond with him, and we have a very special relationship,” he says.

We may think that we are very different to one another, but when one starts exploring commonalities in myths and legends it turns out that we are not quite as disparate as we might think we are. “The human psyche is very connected in terms of how it works over time and space,” says Goldstuck. “I am not trying to be esoteric, but rather am saying that the boundaries of geography and time tend to be diminished when you look at common beliefs and the common belief structures in psychological structures.”

Goldstuck says that humans are natural storytellers and that if one went back to the earliest social unit telling stories would be a part of that culture. “Urban legends are one of the modern manifestations of storytelling. Urban legends tend to reflect fears rather than hopes and perpetuate because they touch common chords in people. This is what makes it easier for people to believe in them and propagate them. We don’t want to know that they are not true.” DM

The Burglar in the Bin-bag looks at those email hoaxes we’ve all received at one time or another that spread panic and pandemonium en masse and investigates why social networks propagate these myths so effectively and quickly. Goldstuck’s other books on urban myths and legends are The Rabbit in the Thorn Tree; The Leopard in the Luggage; The Ink in the Porridge; The Aardvark and the Caravan and The Ghost that Closed Down the Town.

Read more: “Urban legends: Modern morality tales” on The Epoch Times,  and “The Book Behind the Sewer-Alligator Legend” in The New York Times.