Editors ditch The New Age at the altar

Editors ditch The New Age at the altar 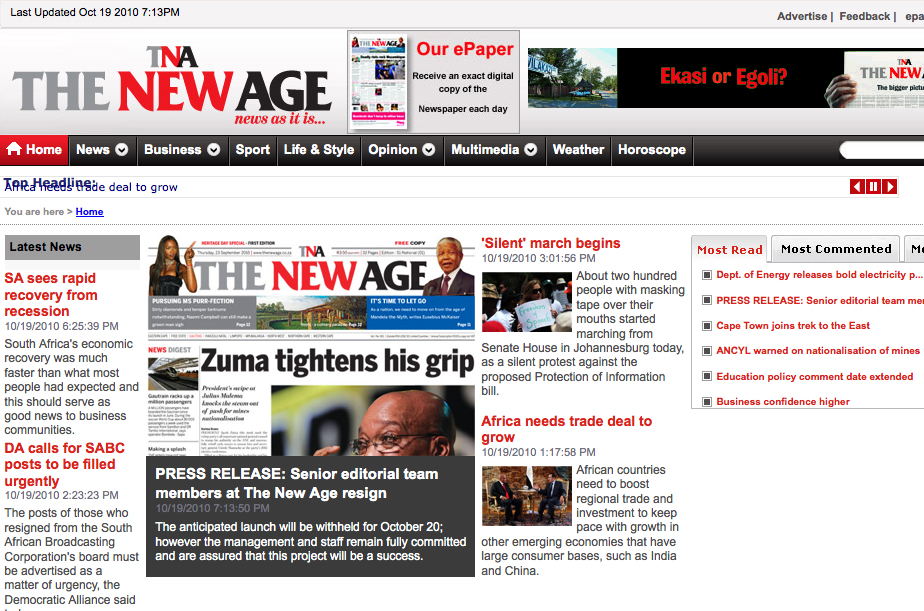 Oh dear. That happened fast. The New Age, supposed to be a newspaper showing how the glass was half-full, has found that when it comes to starting up big business operations, it’s really half-empty. And when it comes to its editorial staff, it’s now even emptier. By STEPHEN GROOTES & MANDY DE WAAL.

The story had gone quiet since the Guptas published their free ANC NGC launch edition at the end of September. Until then, it had faced a hostile media reception, with jibes and pointed comments being the order of the day. They were sparked by the news that the Gupta family was in charge of the operation. The same Guptas President Jacob Zuma had spent so much time with on his last trip to India. The same ones who had Zuma’s son, Duduzane, on their board of directors. The addition of Essop Pahad into the mix didn’t help much. Many political reporters remember trying to deal with him during the height of his powers in the Mbeki administration. He was the guy who boasted of fighting with “European proto-facists” in his youth, who really didn’t mind having a full blooded go at any journalist who dared cross him. And he was on the board! It didn’t augur well.

But the Guptas were canny. They bought themselves some respectability, by hiring good journalists, people known to have a certain independence of mind. Vuyo Mvoko had done well at Business Day, and had had a taste of the top deck as political editor at the SABC. Karima Brown had shown she wasn’t going to be part of anyone’s pack during her time as political editor at Business Day. She had shown she had the best contacts and insight into what was happening in the ANC. For a paper facing a hostile market, these were good people to hire.

So what went wrong? The first indication of trouble in paradise came when a routine call to Mvoko on Tuesday afternoon just to confirm that the paper would be coming out as planned returned with an “I’ll call you back” reply. It’s not a difficult question, either the paper was coming out, or it wasn’t. Calls to Pahad elicited a similar response. Then, just after 6:30pm, and presumably just a couple of hours before the paper would have gone to bed, came the first rumours of high-level resignations. In the media world nothing moves as quickly as news about news. Just before 7pm the paper was forced to confirm the five resignations, the ones of editor-in-chief Vuyo Mvoko, deputy editor Karima Brown, news editor Amy Musgrave, opinions and analysis editor Vukani Mde and arts and culture editor Damon Boyd.

And that the paper would not be coming out as planned on Wednesday morning, 20 October.

“The resignations came as a shock,” says Gary Naidoo, managing editor of TNA Media, the company that owns The New Age, which is financed by billionaire businessman and Zuma ally Atul Gupta. “We had no idea this was going to happen. We were on diary and ready with copy that was going into our news suite when this happened.” Naidoo says no reasons were given for the editorial team’s sudden departure. “The communications merely stated that the resignations were effective immediately and no reasons were given. It came as a huge surprise because this happened the day before we were due to send out our first edition. We are still trying to gather ourselves and understand what happened because we have no idea as to the reasons behind this. We will have to regroup and find a way forward.”

Naidoo said the paper would be delayed and didn’t offer a new date for launch. “This will obviously delay the paper, and because of this we have announced that the launch will be postponed. We have appointed the night editor, Jeremy Shepherd-Smith, as the acting editor, and we are confident he has the capability to assist us at this stage. We will sit with all the editors that are left behind and try to understand from them what happened, and what effect and implications these resignations will have. It is difficult for us to say when we will be ready to launch the paper. We now need to engage the editors who remain and sit with them together with the production team and understand what their plans will be with regards to putting the newspaper out. Over the next few days we will be able to assess the impact and make an announcement.”

The first thought in most media people’s minds was “was this about interference in the decision making of the paper?” Was this about the Guptas hiring an editor, and then doing the editing themselves. What was the role of Pahad? He says he doesn’t get involved in production processes, but many people would be cynical about that. Unfortunately, the five who resigned aren’t saying anything yet. There will be intense pressure on them from their colleagues to give in eventually, and they will probably choose the outlet they do speak to carefully. It’s easy to charge that they’re failing journalism by being less than completely open about what’s happened. But they must all be quite traumatised at the moment, wondering what to do now? Will their former employers have them back? Have they done the right thing?

It can also be humiliating to have been told by some of their friends that they were mad to go to The New Age in the first place, and to find that the media establishment may have been right. They’ll tell their story in the end. If they want to be bitchy, it’ll be published the same morning that the paper actually comes out.

Talking of the established media, its glee would appear to be unrestrained. There’s nothing journalists like more than being proved right, in one way, that’s why we’re journalists. But journalists everywhere should mourn the death of any voice, no matter what it expounds. There is a problem with media diversity in this country, there is “group-think” and this paper had a chance (and certainly the money) to buck that trend. We don’t know if it’ll happen now. But should it happen, we should mourn the loss of a new voice.

The New Age is not dead yet. There is plenty of money behind it. It’s not too hard to cobble something together with a bit of will and plenty of hands to see it through. But its credibility is now shot to hell. Management can either decide to go the independent way, spend a fortune on a new editor (and probably be forced to pay him or her upfront) and then step back from the day-to-day operations, or it can just say to hell with the rest of the media, get someone they want, who doesn’t mind the editorial stance of the owners, and just publish the damn thing. Get it on the streets and let the market decide.

On balance, we think they’ll choose option two. And yes, we do believe that a new voice, no matter where it comes from, is always a good thing. DM

Read more: “Behind the New Age meltdown at M&G Online.