Athletes and drugs: an abusive relationship 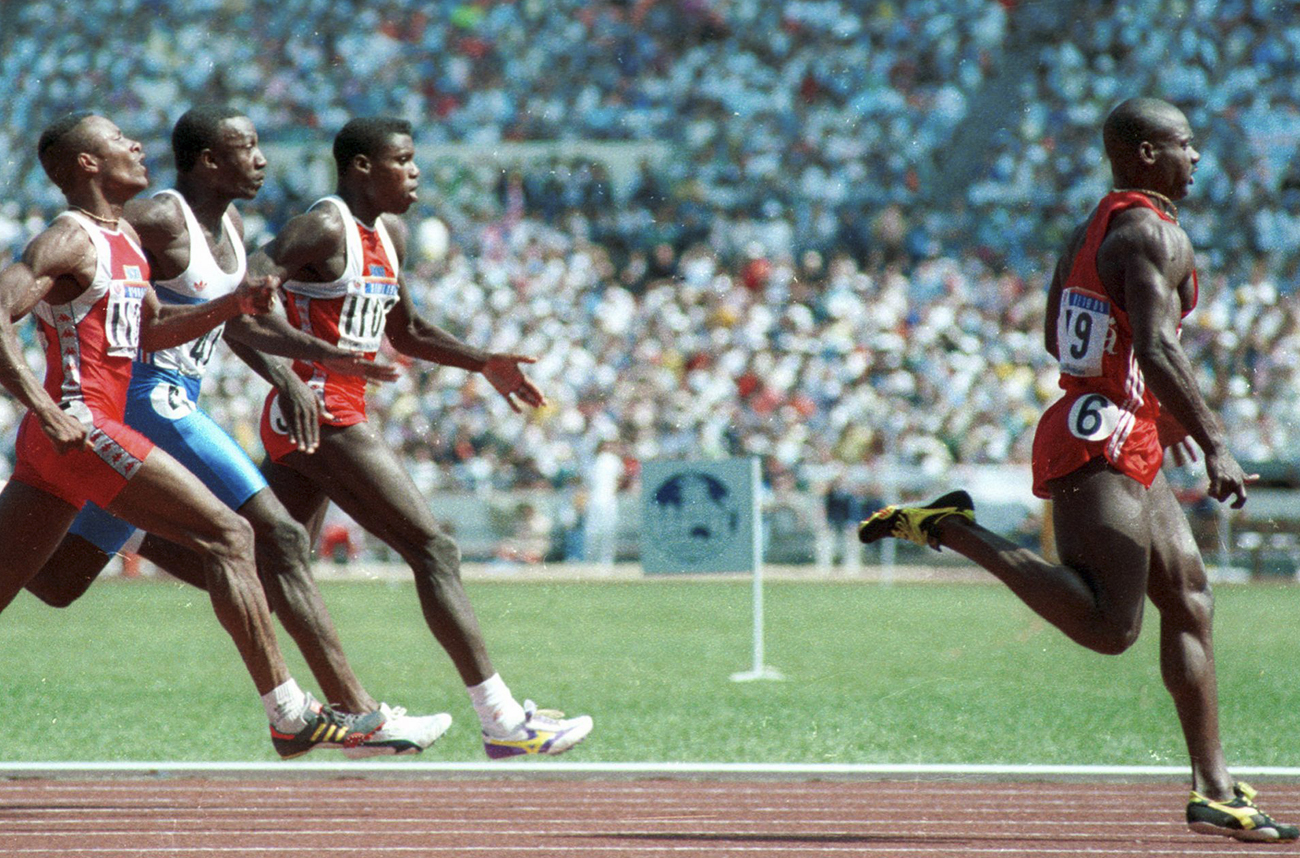 The 2010 Commonwealth Games is just the latest sporting event tainted by a doping scandal – with three positive tests so far, not counting athletes who were banned before the Games even began. When will they ever learn? Will they ever learn? By VRINDA MAHESHWARI, Delhi.

The third positive drug test at the Commonwealth Games was announced on Wednesday, when Rani Yadav, an Indian athlete who participated in the women’s 20km walk, tested positive for 19-Norandrosterone, a banned anabolic steroid more commonly called nandrolone. She has been provisionally suspended, and was scheduled to attend a hearing before the Commonwealth Games Federation court later that day. Use of nandrolone is prohibited by the World Anti-Doping Agency.

Yadav came sixth in the women’s 20km race walk on Saturday. This won’t affect the medal standings, but the provisional suspension has come as a huge disappointment to the host country. This is the third positive test of the 1,300 tests conducted at the games. Earlier in the tournament, the women’s 100m champion from Nigeria, Oludamola Osayomi, and her compatriot, the 110m hurdler Samuel Okon were found to be using methylexaneamine, a banned stimulant. All of Osayomi’s results in the games have been nullified, and she has been stripped of her gold medal since her B-sample confirmed the positive result. Okon has also been disqualified.

CGF president Michael Fennell announced that about 1,500 tests have been planned for the games. Wada is observing the tests and the CWF is responsible for conducting them. The frequency of tests was due to increase systematically to ensure that not only are all medal winners tested, but that random checks are also undertaken.

Lalit Bhanot, the secretary general of the organising committee, called the latest incident “unfortunate” and said though the federations and the National Anti-Doping Agency had done their best, testing athletes regularly, it was difficult to control doping if sportspeople were dedicated to taking banned substances. Doping has become a recurrent problem in Indian sports, with weightlifting bearing the greatest load: Six offenders were banned last year and almost as many so far this year. Two athletes, three swimmers, six wrestlers and one weightlifter from India have tested positive for methylhexaneaemine in 2010 alone.

Of course, drugs and sports have gone hand-in-hand since competitive events began. In ancient Greece, Olympic athletes would eat specially prepared meat (including lizards), and drink magic potions to boost their performances. Whether this actually worked or not is a moot point, but there’s no denying the intention to cheat was there.

It’s no different in modern sport, which is rife with suspicions about performance-enhancing drug use by many top athletes. The usual suspects are human-growth hormones (which promote physical development), anabolic steroids (drugs that resemble testosterone and control the metabolic rate), beta-blockers, erythropoietin, stimulants and diuretics.

But even more serious than the implications for fairness is the fact that many of these drugs have severe side effects, which are not completely understood even today. They pose genuine health risks, which go unheeded by athletes intent on winning their events at all costs. One athlete who paid with his life was Danish cyclist Enemark Jensen, who lost consciousness and fell off his bike during the 1960 Olympics in Rome, causing his death. He was found to be under the influence of amphetamines.

In fact, professional road cycling has been one sport most plagued by doping allegations, the most persistent being those around Lance Armstrong – in American eyes a legend both in and out of the saddle having won the gruelling Tour de France a record seven times, overcome testicular cancer and set up a foundation to fight cancer. Armstrong has continually denied using illegal performance-enhancing drugs and has described himself as “the most tested athlete in the world”. A 1999 urine sample showed traces of corticosteroid , but medical certificates showed he used an approved cream for saddle sores which contained the substance. Between September 2008 and March 2009, Armstrong submitted to 24 unannounced drug tests by various anti-doping authorities. All showed negative for performance-enhancing drugs.

Arguably the highest-profile case of all times is that of erstwhile fastest-man-on-the-planet, Canada’s Ben Johnson. The Jamaican-born speedster enjoyed a high-profile career during most of the 1980s, winning two Olympic bronze medals and a gold. He set consecutive 100m world records at the 1987 World Championships and the 1988 Summer Olympics, but was disqualified for doping, losing the Olympic titles and both records.

The prevalence of doping in sport has been widely documented (although surely there are many more cases that have gone undetected); more disturbing, perhaps, are instances where national sporting authorities have been lenient in applying penalties.

In 2000, Dr Wade Exum, a former US Olympic Committee member, reported that 19 US sportspersons who went on to win medals were permitted to compete at various Olympic Games between 1988 and 2000, despite having failed drug tests. At the most recent Summer Olympics in Beijing in 2008, “Zero Tolerance for Doping” was adopted as an official slogan. Despite that, six athletes with positive results were ousted from the competition and several were disqualified before the Games even began. More recently, 30 athletes were banned from the 2010 Winter Olympics in Vancouver for failing doping tests – again before the event kicked off.

The negative impact of doping on sports’ image cannot be denied, but it isn’t only the athletes who need to clean up their act. The testing agencies and controlling organisations must stamp their authority on the situation. One issue that repeatedly crops up is that of consistency in standards. For example, Wada recently relaxed the classification of methylexaneamine, and from 2011 it is to be moved to the specified stimulant list (which covers drugs more susceptible to inadvertent use, with athletes who test positive facing reduced penalties). That being the case, it is arguable whether the harsh punishment meted out to the Nigerian athletes in India is in order.

Another issue is that of passive and active involvement in doping. Recently sprinter Geraldine Pillay was implicated in an Athletics South Africa drugs scandal, which left her fuming, betrayed – and confused. Last month, The Citizen broke the story that athletics coach, Ekkart Arbeit had instructed the team doctor, Maaki Ramagole, to give actovegin (a restricted substance) to Pillay. Allegedly, Pillay was administered the drug between April and May 2008 without her knowledge or consent, instead labouring under the impression that she was being given vitamin boosters.

This incident reveals the depths to which nations and coaches will sink to get ahead in the sporting arena, and it is crucial that blame be apportioned where it is due. We’ve all heard the “I didn’t know I took anything” line too many times, but we shouldn’t forget that each case needs to be judged on its merits. Doping may not always be the athlete’s fault – although it often is.

That said, the International Association of Athletics Federations releases a handbook every year listing all the banned substances, and it is each individual athlete’s responsibility to ensure they know exactly what is going into their body. Certain substances are allowed to be taken outside competitions, but not during them, so it pays to do your homework. Pillay, who is now an ASA board member, doesn’t want other athletes to be subjected to the trauma she went through. “I would advise athletes to educate themselves (about) what is on the banned list,” she says. “[The IAAF handbook] is like a Bible for every athlete.”

Fennell, reacting to the doping instances at the 2010 Commonwealth Games, agrees saying there is a need to “increase the educational activities where doping is concerned so that the athletes and their coaches know what is required and how to prevent this kind of disgrace”.

This highlights another facet of the doping issue: The subsequent shame for the athletes involved. Being stripped of your medals, banned for a certain number of years, losing out on sponsorships and facing the opprobrium of your team mates and countrymen seems pretty heavy. But judging by the number of athletes who still flout doping regulations, this doesn’t seem enough of a deterrent. Perhaps we should return to how the ancient Greeks did it – they carved images of cheating athletes onto stone statues that lined the pathway to the Olympic stadium, thus capturing their shame in perpetuity. DM

Main photo: Sprinter Ben Johnson wins the gold medal in the 100m sprint in Seoul. At the 1988 Seoul Games muscular Ben Johnson exploded from the blocks to cross the line in 9.79 seconds, four hundredths of a second faster than his own world mark. This race resulted in the biggest drugs scandal to hit the summer Games when Johnson tested positive for the steroid stanozolol. The sport of track and field, and in particular the 100 metres, has struggled for credibility since. Picture taken 26 September 1988.REUTERS/Gary Hershorn