VW Amarok: It’s the battle of the bakkies 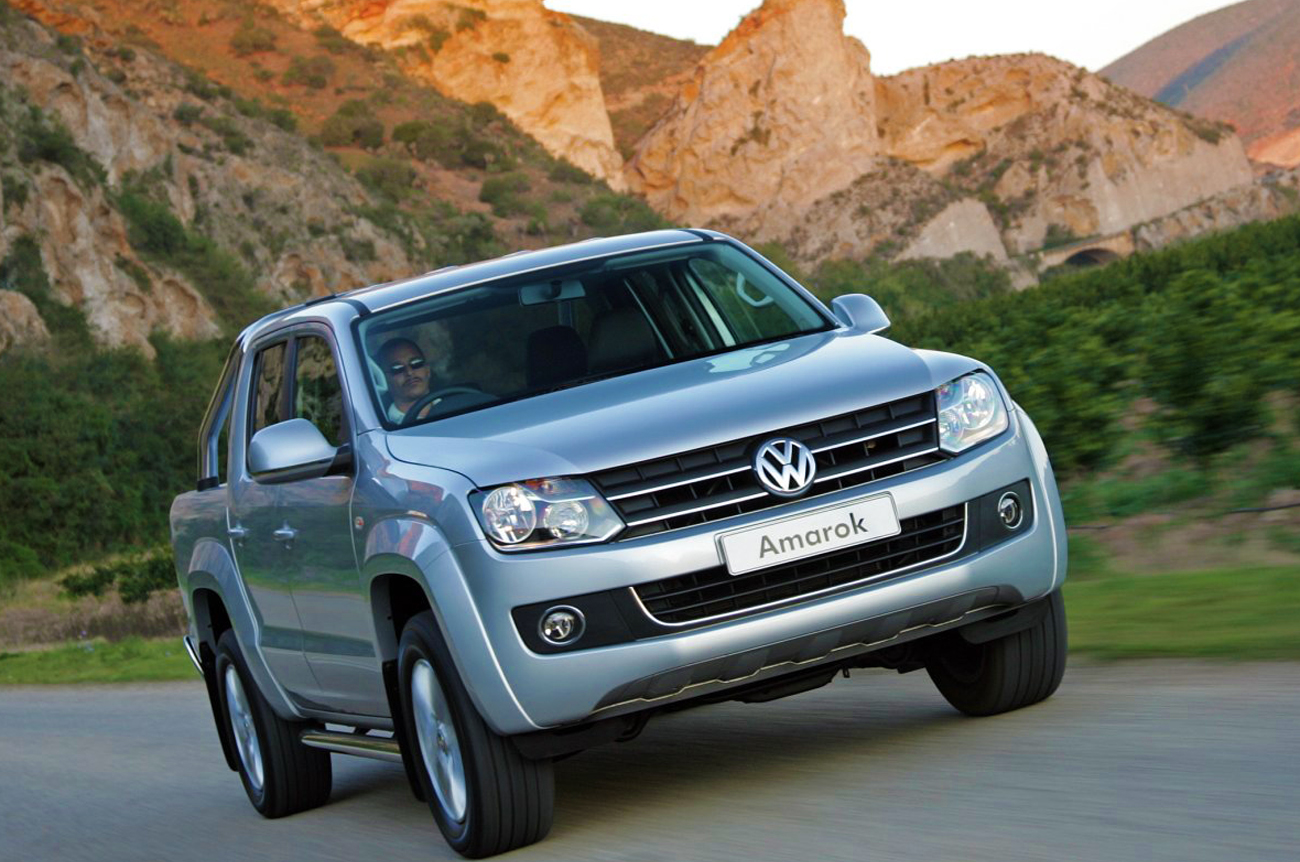 In sheer volume terms, the South African bakkie market has been dominated for one nameplate for almost as long as we can remember: the Toyota Hilux. But now, there’s a new contender on the block. It hails from Germany, but is built in Argentina, of all places. And it means business – serious business. By DEON SCHOEMAN.

If there was any doubt that South Africa is bakkie country, our recent experiences at the wheel of the new Volkswagen Amarok proved that local motorists are as enthralled by these quasi-workhorse leisure vehicles as they are by exotic sports cars.

Remember, I get to drive expensive, imported, high-performance machines as a matter of course, and I’ve become used to the envious stares of fellow road users. But nothing I’ve ever driven – no Ferrari, no Porsche, no Rolls Royce or Bentley – has ever created as much of a stir as the Amarok.

I got stopped in traffic, accosted in parking lots, hounded in shopping centres – and all because I was driving a vehicle that stands almost as tall as a truck, has lots of bright chrome bits, offers a big cargo area … and wears a Volkswagen badge.

Of course, some of the huge interest in the car could be the result of one of the most concerted pre-launch marketing campaigns ever waged by Volkswagen in this country. The Amarok debuted as a support vehicle on the gruelling Dakar rally raid, then became one of the stars of the Nampo show – an agricultural jamboree that attracts one of the biggest show crowds on the annual events calendar.

Yes sir, VW sent its Amarok out there with all guns blazing, and by the time it finally made its debut in the Eastern Cape, on a route that included some testing trails in the Baviaanskloof area, anybody with an inkling of interest in bakkies knew the Amarok was coming. It’s clear that the Germans have benchmarked their utility steed against the market leader. While the styling is unmistakably Volkswagen (think Golf 6 with a steroid twist), the angular silhouette, the supersized dimensions and all the chrome bits are direct references to familiar Hilux themes.

We’re told the Amarok is bigger in every important dimension, including being able to fit a pallet on the back, between the wheel arch intrusions. That’s how wide it is! Not sure how many double-cab bakkie buyers will want to load a pallet, though…

Volkswagen SA is following a stepped launch strategy for Amarok, which means the first models on our roads are all double-cabs, featuring the top-end bi-turbo TDI engine. A second, slightly detuned single-turbo diesel engine is set to follow, together with an extended model palette that will include single-cab workhorses in 4×2 and 4×4 versions.

So, there we were, driving a double-cab 4×4 Amarok bi-turbodiesel with a six-speed manual transmission. The 4×4 system is called 4Motion in VW-speak and features a proper transfer case with low-range gears – as any real 4×4 bakkie should. Indeed, the Amarok tries very hard to be a real bakkie, almost despite that VW badge. This particular model will attract mostly leisure buyers seeking a versatile vehicle that can be mom’s taxi during the week, dad’s plaything on weekends and the family’s holiday transport in December.

As already mentioned, the Amarok is an imposing vehicle. The angular silhouette has a certain rugged appeal that steers a finely judged line between functionality and macho style, with the brightwork an unusually brash touch for a brand that trades on understatement.

Build quality is impressive, with the kind of flawless paintwork, fine shut lines and precise panel fit usually associated with a premium passenger car. Which might end up being a deterrent to taking the Amarok off the beaten track, and subjecting it to the inevitable scratches, nicks and dents…

The ride height is also impressive, even by 4×4 standards, and you need that grab handle on the A-pillar to ease your entry into the cabin. In range-topping Highline trim, the appointments are pretty comprehensive, with all the usual mod cons – air-con, leather, decent sound, electric windows and mirrors, central locking, and so on – while the cabin looks and feels truly cavernous. Think five adults, accommodated with room to spare, and you get the picture.

One of the more controversial aspects of the Amarok is the engine. The flagship version under scrutiny here gets a 2,0-litre bi-turbodiesel powerplant, credited with 120kW and 400Nm. The output figures are impressive, but the relatively small engine capacity suggests some clever use of the two turbo’s.

And yes, it seems to work well enough in practice, although much of the engine action seems to happen low down the rev range. It gets off the mark with brisk enthusiasm, and revels in being taken off-road, where it always delivers plenty of grunt. The low-range gearset makes the most of that urge, and it feels up to any off-road challenge.

Of course, it has to offer real all-terrain talent if it wants to take on the Hilux. But off-roading is only one facet.

On tar, where most of these double cabs will spend much of their commuting life, the Amarok doesn’t disappoint. In fact, it retains some vital VW DNA, meaning it feels solid and cohesive, with a surprisingly composed ride, and confident handling – despite its long-travel suspension. Noise levels are low, although the tread pattern of the Bridgestone all-terrain tyres looked more city slicker than bundu basher, which will help reduce road roar and rumble.

The gearbox feels pleasantly positive, without too long a throw and switching between high and low range is simply a matter of pushing a button. So far, so good. That goes for the engine, too, which pulls strongly from the word go, displays no sign of lag and seems to sustain that thrust through all six ratios.

Sixth is clearly a cruising gear, designed to keep the revs low and limit the Amarok’s thirst for low-sulphur diesel. And yes, that does mean it sometimes feels lethargic to throttle input in top gear. Nothing unusual, that – although some believe it draws the Amarok’s towing credentials into question.

We never drove it with more than a couple of passengers on board, and we don’t own a Venter, so we can’t deal with the towing issue. But we see no harm in having to tackle steeper inclines in fifth gear to maintain momentum, in the interests of keeping the revs and consumption down  in sixth when the road flattens out.

With a 0-100km/h sprint time of 11,1 sec, and a 181km/h top speed, the Amarok is no slouch, and acquits itself well in traffic light grands prix. The brakes feel, well, okay – fine by bakkie standards, but not crisp enough for our liking.

But it’s the fuel consumption that will get people sitting up and taking notice. During our week-long drive, which included some open road travelling and some city commuting, as well as conquering some off-road obstacles, we recorded a sub-10 litre/100km consumption figure. That’s pretty damn impressive … So, does Toyota have anything to fear from VW’s upstart? Yes, and no. The Amarok is the larger, roomier, sexier and more innovative contender. It has a high-tech engine that seems to get it right across almost all applications. And it delivers decent 4×4 capability.

But what the Amarok lacks, for now, is a proven reputation for reliability. Toyota has a head start of several decades in that regard, and as interested as bakkie buyers are in the VW, it will be hard to persuade the Hilux stalwarts to abandon the Toyota ship.

Clearly, Toyota here has acknowledged the challenge. It hosted a motoring media trip to Iceland where journalists got to drive across glaciers and alongside volcanoes in big-wheeled monsters with a family resemblance to what we call a Hilux here. Why? To steal back some of the thunder from its German rival.

But it’s Volkswagen that is under real pressure here. It has everything to prove – and everything to lose, should Amarok fail to make the inroads it is hoping for. And it could take some years for Amarok to build the reputation for longevity and reliability so vital for success in this market.

For now, however, Amarok is the bakkie of the moment. Driving one will be an eye-opener – and a ticket to many a parking-lot conversation about bakkies, bakkies … and yes, of course, bakkies! DM

Deon Schoeman is a presenter for the RPM TV motoring show. Contact him on rpmtv.co.za