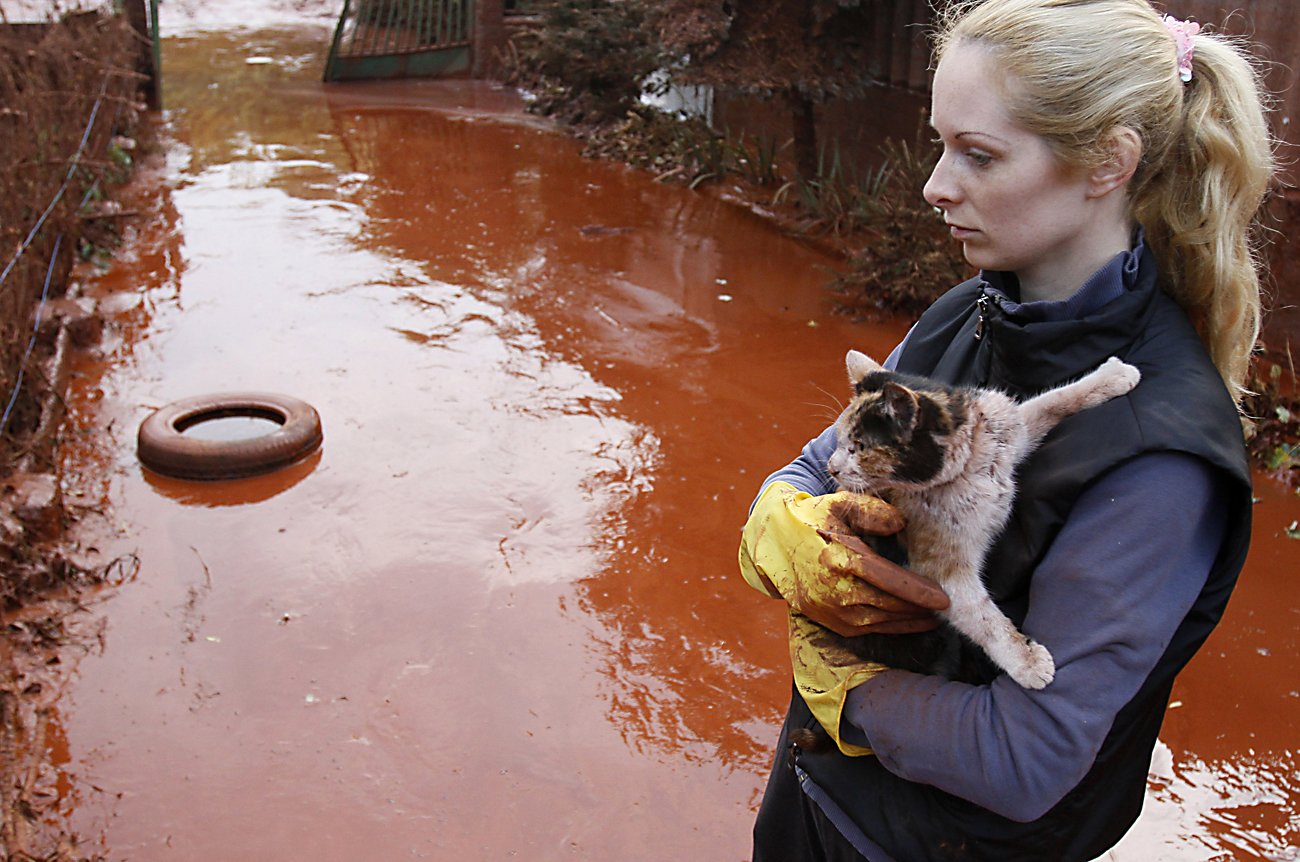 2010 hasn’t been a good year for man-made environmental disasters. Just when we’d all but forgotten about May’s oil spill in the Gulf of Mexico, the toxic sludge leak in Hungary has oozed its way into our consciousness. The human cost of such events is all-too-evident in the lost lives, and the immediate environmental devastation is clear from the images beamed around the globe on television screens. But this is only the beginning. Even when the sludge is “cleaned up” – which could take as long as a year – the long-term damage to the environment is, at present, incalculable.

Four people have died, six are missing and about 120 people were injured after a reservoir at the Ajkai Timfoldgyar plant in Ajka, about 160 kilometres from Budapest, started leaking. The torrent of noxious red sludge, which caused immense devastation in Hungary, has now reached the River Danube. Earlier this week, Hungary declared a state of emergency in three counties. It is now being termed as an “ecological disaster”. The International Commission for the Protection of the Danube has said that the sludge run-off could cause long-term damage to wildlife and humans.

The caustic red sludge originated in a sludge reservoir, which contained the leftovers from the conversion of bauxite to aluminium. It has been stored by the Magyar Aluminium (MAL), a Hungarian aluminum production and trade company, in various artificial storage ponds for close to 25 years. On Monday, at about noon, a corner of the sludge reservoir fell apart, and goo oozed into the surrounding countryside, spreading destruction in its wake. The surrounding villages were turned into red-tinged disaster zones.

The sludge was a highly alkaline caustic substance; not only did the mud drown four people, at least 100 others who came in contact suffered burns and had to be hospitalised. About 1 million cubic metres of sludge has spread to over 42 square kilometres, and hundreds of residents faced lung irritation or mild burns. In addition, the sludge killed a lot of livestock.

So far, there has been no confirmation or official analysis of the chemical contents of the sludge. But its potency is not in doubt; red mud obtained from the aluminium purification process can contain heavy metals, and be radioactive. Its ingredients can cause various health problems, and in the long term, it contaminates the environment. The sludge percolated into the local streams – which looked as if they had been died with henna – and began moving downstream via the Raba River. All the river life in the local rivers and streams was destroyed, and as it heads into the Danube, a wide-scale international environmental disaster could be at hand. Until now, the damage had been limited to Hungary, but Joe Hennon, the European Commission’s spokesperson for environmental issues stated that the EC was worried about the sludge moving to where it would affect other countries as well, as there was potential for fairly widespread environmental damage.

Earlier, the area had a thriving bauxite and coal mining industry and so had a dozen sludge storage ponds. But currently MAL is one of only three aluminium factories still operating. Sludge ponds from obsolete plants are present all over Europe, not to mention the US, and pose a grave threat to the environment, and to the health of  residents. Gabor Figeczky, acting chief executive of WWF-Hungary holds that these reservoirs are poorly maintained; while they are supposed to be filled, some (like the one that leaked) are huge and filling them may take a very long time.

While the reservoir wall has been repaired, the clean-up operation is far from over and could take more than a year. Currently, the pH content of the ground has been restored to a safe level, according to officials. Relief operations, comprising soldiers, firefighters and police officers, have started helping and evacuating residents. Wearing surgical masks and thick boots, they shovel the sludge into trucks, and hose down the roads and homes to make the area habitable again. Residents have been assured that their homes will be cleaned and decontaminated, although it is still not clear who will be paying for this, or even who will carry out the decontamination. In the meanwhile, the residents have been demanding compensation from the company officials, as well as from the local government; how far their claims will be satisfied is yet to be seen.

Hungary’s top investigative agency of is conducting an inquiry into the event, and a case for criminal negligence is being considered, but it is still unclear whether the company or individual employees will be targeted. It is suspected that the sludge level increased because of the rains, and company officials claim that it was well within the permitted limits before the spill. According to the EC, the company had received its most recent permit in 2006, and had no history of accidents or violations. The sludge ponds were due to be inspected next week. MAL said that in terms of EU standards, the sludge was not toxic waste; it denied that more precautions to shore up the reservoir were needed.

Hungarian Prime Minister Viktor Orban admits that authorities were caught off guard, since the reservoir and plant had successfully passed recent inspections. This is the first large-scale disaster involving aluminium sludge, and even experts are unsure about how it is to be handled. The region’s topsoil will need to be replaced entirely, since it has been rendered completely alkaline, and been contaminated with heavy metals. The full effect of this ecological disaster has still not been estimated; but it is clear that it has strong repercussions not just for Hungary, but the entire region. DM

Photo: A resident rescues a cat from toxic sludge that flooded the village of Devecser, 150 km (93 miles) west of Budapest, October 5, 2010. The Hungarian government has declared a state of emergency in three counties in western Hungary due to an alumina sludge spill which killed at least three people, news agency MTI reported on Tuesday. REUTERS/Bernadett Szabo