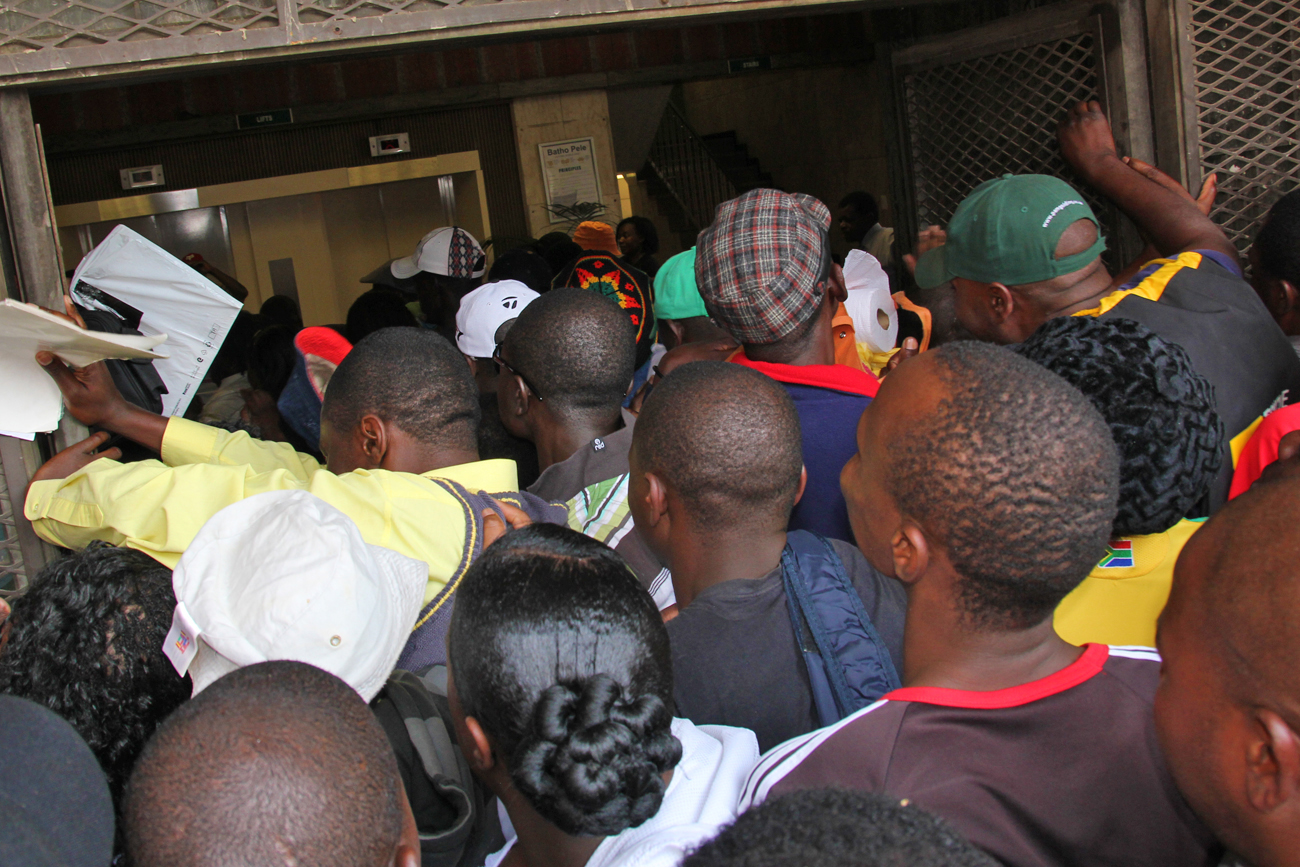 If estimates on the number of Zimbabweans in South Africa illegally are even two-thirds accurate, less than 1% of those immigrants have managed to apply for papers in the last couple of weeks. But the home affairs ministry says numbers will pick up, that it will be able to deal with the load (all current evidence to the contrary notwithstanding) and that neither illegals nor their employers have anything to fear. By PHILLIP DE WET.

On Monday afternoon a mini-stampede at the Harrison Street home affairs office left one woman injured as a crowd, including mothers with babies on their backs, some of whom had slept on the pavement overnight to secure a spot in long queues, rushed the doors. Many in the line told stories of financial woe from having to take off work for days, without knowing just how many days it would take, or spoke of their fears that officials would deny them the papers they require to stay in the country on the basis of xenophobia.

But on Wednesday deputy home affairs minister Malusi Gigaba expressed confidence that “bottlenecks” and “deviations from standard operating procedure” had either been addressed or would shortly be sorted out, and refused to give an inch on the 31 December deadline set by cabinet, after which undocumented Zimbabweans face deportation.

We are steadfast that we are going to retain the deadline of 31st of December… we are not going to move away from it at all,” he told a media conference in Pretoria. At the current rate of processing, that seems extremely unlikely. Gigaba says the department has received just over 10,000 applications from Zimbabweans who would like to stay in South Africa when the special dispensation that prevents their deportation ends at the end of the year. The department had recorded 30,915 enquiries, mostly questions on the paperwork required and procedures to be followed.

According to some estimates, there are more than 1.5 million Zimbabweans living in South Africa, many of who will need to go through the current application procedure, though there is no certainty on either count.

Gigaba acknowledged some of the problems with the process that have become apparent over the last week, such as employers who fear they will be prosecuted for having employed illegal immigrants, and therefore don’t want to provide the sworn statements of employment that the workers require to receive permits. Such fears are entirely unfounded, he said, saying there would be no penalties whatsoever for employers.

Another fear he described as baseless is that of xenophobic attacks on applicants. In the Harrison Street office, several Zimbabweans said they were aware that the Soweto home affairs offices were under much less pressure, but that they preferred to stick to the inner city, where they feel more at ease. One man described a queue of known foreigners in a township as “trouble waiting to happen”.

But home affairs is very keen to encourage applicants to use such peripheral offices in order to reduce the seemingly unmanageable queues in cities like Durban, Pretoria and Johannesburg – though it apparently has no plans to assure immigrants of their safety. Soweto is a cosmopolitan place, Gigaba shrugged, and if more police are required to manage crowds they will be available. It is clear, however, that bureaucracy is, and almost certainly will remain, the major problem. Applicants throughout the country have reported that officials demanded proof of residence or tax certificates from them, neither of which are actually required. Some say officials demanded bribes of R750 per person, either directly or via “facilitators” trawling queues.

And that is before the spike in applications that is expected in November. On top of the usual last-minute rush, many Zimbaweans are either awaiting new or renewed passports from their consulate. Work permits are being issued with a validity of four years, or until the expiry date of the passport, so many would-be applicants with valid passports expiring in 2012 or 2013 are applying for new ones to ensure an extended stay.

The resources home affairs has assigned to deal with the current load and prepare for that spike seem ludicrous. Gigaba said 354 employees had been seconded to the project nationally, with a 27-person national processing hub. A single mothballed home affairs office in Johannesburg is to be reopened by next week. Other than that, the hope is that streamlined processes and other tweaks will be sufficient.

A gung-ho attitude notwithstanding, it seems likely that the government will face a court bid to force an extension in early December, if not from the Zimbabwean Movement for Democratic Change (which has already made noises to that effect) then from immigrant rights groups. In the meanwhile, though, eager applicants aren’t counting on that. They have built lives in South Africa, many told us, and will not be risking deportation on such a chance. DM