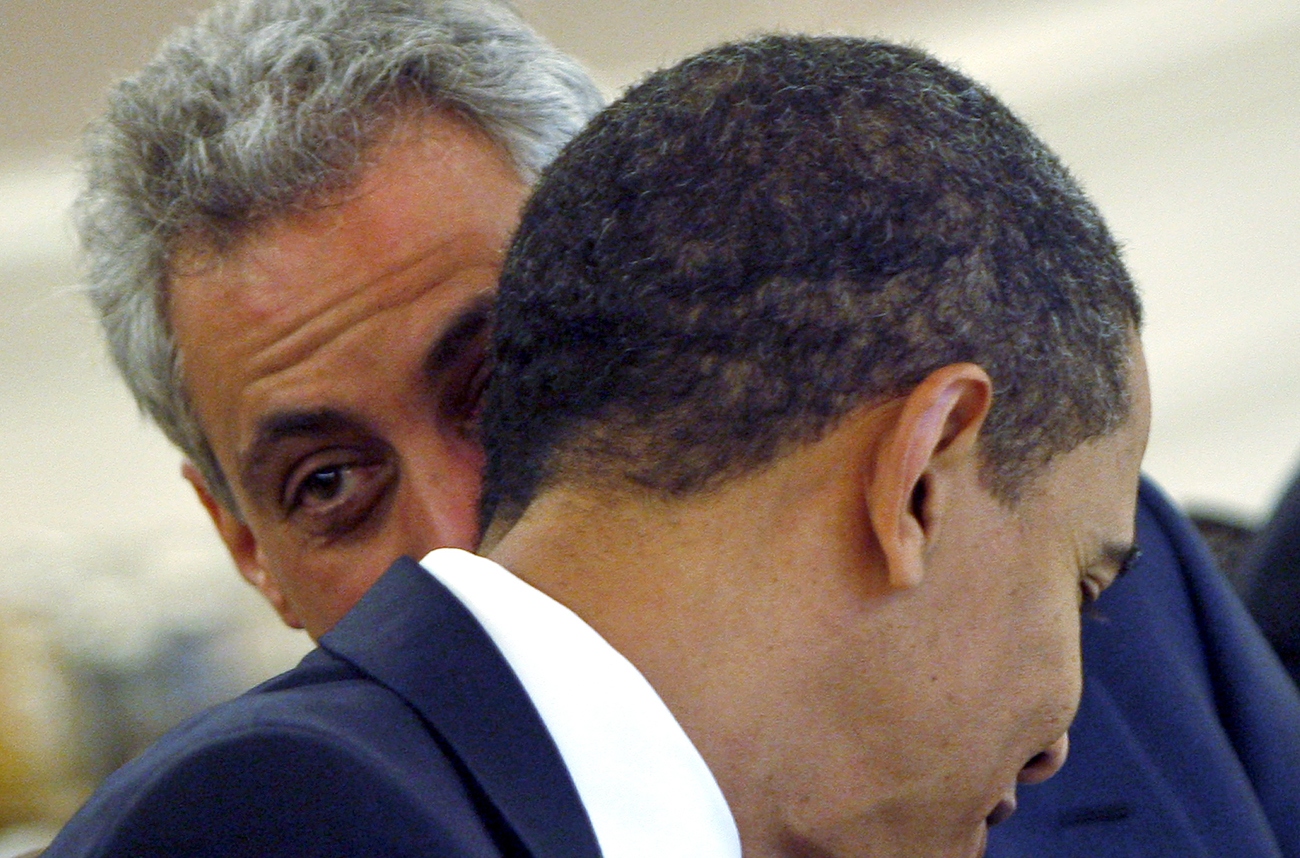 Rahm Emanuel – the man who has just walked away from what might be the second most powerful job in America as Barack Obama’s chief of staff – was always a man with a background that defies easy pigeon-holing. Even the true stories. By BROOKS SPECTOR.

Emanuel is renowned for the kind of language sometimes referred to as colourful – a synonym for things we can’t print without a plethora of dashes or asterisks.

When Obama honoured him at the end of last week, Obama said Emanuel had been rendered temporarily speechless when he lost part of his middle finger in a teenage accident. True story.

Rahm Emanuel is well known (and feared, hated or admired) for having once sent a political opponent a very old, very dead fish, wrapped in newspaper. True story, again.

The now-former chief of staff studied ballet after high school, served in the Israeli Army, became a congressman from Chicago, Illinois, and rose to a key leadership position in the House of Representatives. All true.

Less well known, perhaps, is that he was deeply influenced by his mother’s politics. Marsha Smulevitz was a civil rights activist who had marched with Martin Luther King and who had been arrested more than once because of those marches. His Israeli-born father, Benjamin, was a veteran of the Irgun, the armed, militant Zionist group whose contemporary descendant is the Likud Party. Emanuel’s brother has told journalists he knew Rahm would take the job of chief of staff because of his maternal grandfather, a boxer and a union organiser, who had infused Rahm with a desire for public service. All true as well.

And as The New Yorker’s political commentator Ryan Lizza noted, Emanuel is “a political John McEnroe, known for both his mercurial temperament and his tactical brilliance.…As a child, he attended a Jewish day school in Chicago, where students received written evaluations, instead of A’s and B’s. ‘My first-grade teacher,’ he told me, ‘said two things that were very interesting: Rahm likes to clean up after cleanup time is over.’ He pointed to his desk. ‘I am fastidious about it. In fact, this is messy today’. The second point was about Emanuel’s personality being larger than life. In the first grade.” Even those are true.

But after two years as a critically important part of Obama’s election campaign, the daily running of his White House for nearly two years, and the near-total lack of sleep, family time and free time, Emanuel has heeded the siren call to return to Chicago and run for the soon-to-be-vacant post of windy city’s mayor.

An open contest for mayor in that city only comes along about once in a generation – and now is the moment. The city’s near-permanent mayor, Richard Daley, had chosen not to run yet again for the office he had so clearly shaped into a family franchise (Daley’s father had similarly ruled the city for a generation in the 1950s, 60s and 70s.)

If readers want to speculate on why Emanuel would abandon his powerful post in the White House for the seemingly inferior position of mayor of America’s third-largest city, contemplate the fact that in America’s vastly disparate, loosely structured federal system, becoming the really powerful executive mayor of a big, boisterous city like Chicago will simply be more fun than being the sleep-deprived right hand man to his long-time friend, the president. And besides, if he wins, he’ll have lots more free time to enjoy his city’s vibrant cultural life, great restaurants, and its exciting business, intellectual and financial worlds.

At Emanuel’s farewell, Obama told his audience that his friend was moving on to take on “a challenge for which he is extraordinarily well qualified’’ – referring either to his candidacy for mayor or his skill at running electoral campaigns. Emanuel is now entering a highly compressed campaign, with the election set for 22 February and a runoff, if required, on 5 April. So, he’ll know his fate soon enough.

To replace Emanuel, Obama reached into his current team to name senior advisor Pete Rouse as his interim chief of staff. The Washington rumour mill already sizzles with a long – and growing – list of candidates being considered for the position permanently.

At the farewell, Obama added, “For nearly two years I have begun my workday with Rahm, and I have ended my workday with Rahm.’’ Then, turning to Rouse, the man who had been Obama’s chief of staff while Obama was in the Senate, Obama spoke of Rouse as a “wise, skilful and long-time counsellor,’’ complimenting Rouse on his practical problem-solving skills. Obama then added that this was really “good news for Pete,’’ since “we have a lot of problems to solve”.

Rouse comes to the job with a low-key manner and an extensive network of long-time Democratic Party political and policy operatives. He’ll clearly need all this political talent in steering the Obama administration through more turbulent political and legislative waters, given the expected gains by Republicans in the coming midterm elections.

The contrast between Emanuel and Rouse’s styles is striking. One White House advisor, in that familiar posture of anonymity said of the two men: “One of them is all about self-promotion and the other is all about self-deprecation.” He added that while Emanuel was famous for his energetic, profanity-laced management approach, the same would never be said about Rouse. Emanuel is the master of the short-term political battle while Rouse gets the edge as a long-term strategist. When he became Obama’s Senate chief of staff, Rouse wrote the first memo setting out the strategy for Barack Obama’s still-nascent presidential campaign.

Some, like senior economic advisor Larry Summers, are returning to academia before they forfeit their tenure rights. Harvard is always Harvard. Others, like Obama’s now-former budget director Peter Orszag, apparently felt the need to move on and demonstrate a bit of independence before their political capital was possibly run down by further service in the Obama administration.

But while there are many opposing views on how the White House will be reshaped in the coming months and years, it is very much certain that the chief of staff post will not be filled by a more colourful man than Rahm Emanuel for a long time to come. DM

Photo: White House Chief of Staff Rahm Emanuel (L) leans over to speak to U.S. President Barack Obama during an expanded meeting with Turkey’s President Abdullah Gul at Cankaya Palace in Ankara, April 6, 2009. Obama’s visit on the last leg of an eight-day trip that marks his debut as president on the world stage, is a recognition of the secular but predominantly Muslim country’s growing clout and Washington’s desire for its help to solve confrontations and conflicts from Iran to Afghanistan. REUTERS/Jim Young