The Viking among browsers

The Viking among browsers 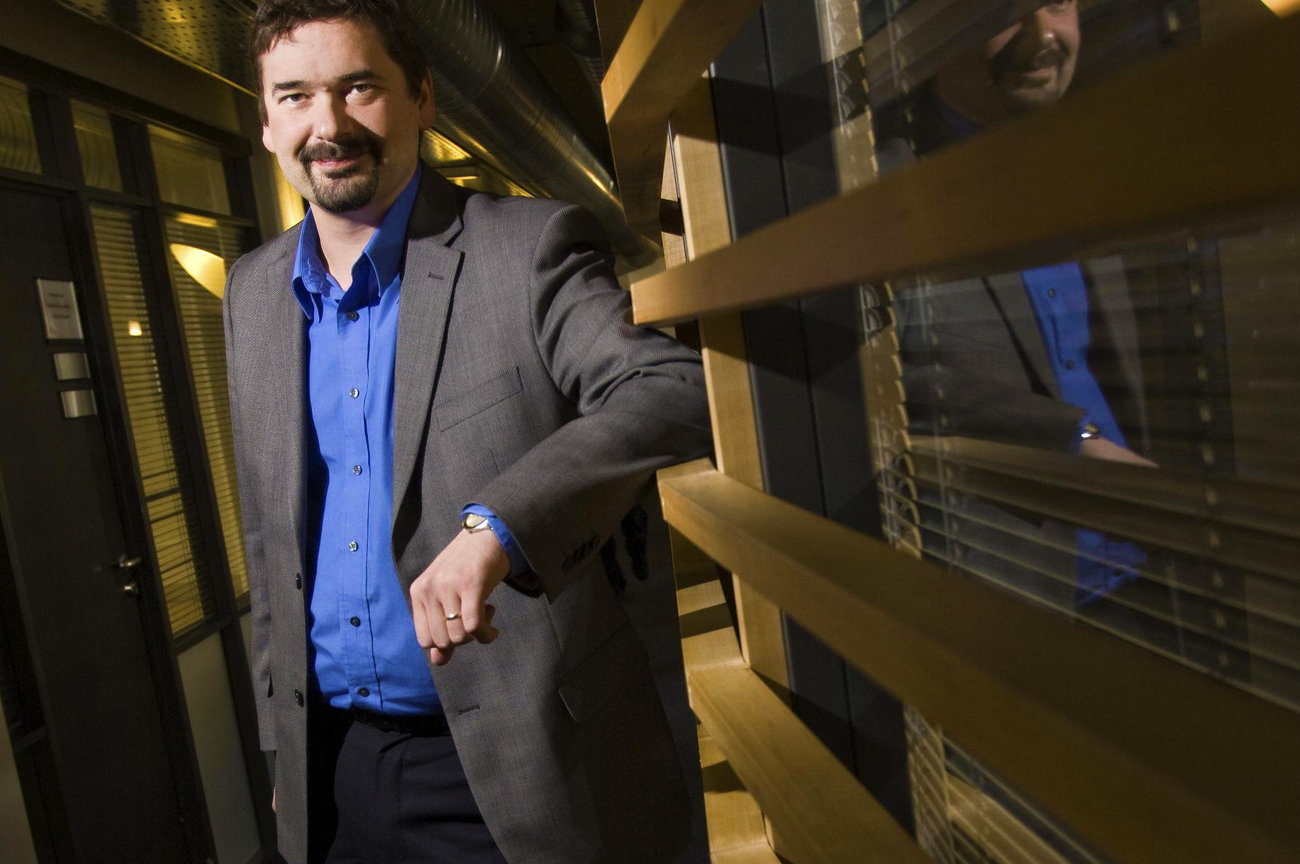 Microsoft is king of the hill when it comes to the global browser market, but Internet Explorer’s rule is being usurped by Mozilla’s open-source Firefox and Google’s Chrome. But when it comes to mobile devices, the Redmond titan doesn’t even feature. That market belongs to some Norse coders who built a global company, Opera, from just $7,000. By MANDY DE WAAL

Who can forget the bloody browser wars in the late nineties when dominator Netscape was hung, drawn and quartered by Microsoft’s Internet Explorer? The Redmond giant reduced Netscape’s market share from 90% to 1% in a flash.

The story goes that when Microsoft launched IE 4.0, they placed a three-metre replica of Explorer’s “e” logo on the lawn in front of Netscape’s offices after the launch party. When Netscape staff arrived for work the next morning they were indignant and put their company mascot, a dinosaur, on top of the Microsoft logo. An ironic gesture given it wouldn’t take long for Netscape to become a dinosaur.

But Microsoft’s supremacy was short lived. In a less dramatic and much slower battle IE’s market share of the browser market has slowly been eroded by a host of smaller players and newer market entries. At the time it vanquished Netscape, Microsoft enjoyed more than 90% of the market. Today it only has about 60%, down from 74,18%  two years ago according to NetMarketShare. Google Chrome grabbed more than 7% of the market in just two years, and Firefox has been growing steadily since its launch in 2004 and is now the second most-used browser, with 22,93% of the total market.

In the mobile sector it is a completely different story and Microsoft doesn’t even feature. Here the leader is a small company from Norway not often mentioned by the mainstream media obsessed with Microsoft, Apple, Nokia, BlackBerry and Google. Opera has long been the underdog of the browser wars, probably because it’s been treading water in the global market with a stable market share of around 2% for as long as anyone can remember.

But in the mobile sector in general, and emerging markets in particular, the Oslo-based Opera Software scores big. “Twenty-four percent of the world population has Internet access, but it is more like 60% to 70% that have mobile access,” says Jon von Tetzchner, cofounder of Opera speaking to The Daily Maverick from Norway. The company’s mobile browser has been a huge success growing from half a million users to 62 million in just four years.

The battle of the browsers is fiercely fought because, while browsers are free to users, there’s big money to be made from deals cut with mobile network operators, device manufacturers, content partners, as well as from search, applications and licensing fees. “We have a number of different revenue models,” says Von Tetzchner. “On the desktop side we give the browser away for free and have revenue-sharing models with companies like Google for search, as well as (with) other service providers. We also sell our browsers to equipment manufacturers who ship the devices with the software preloaded.” These include the likes of Samsung, Toshiba and Nintendo who in the current always-on-Internet-everywhere environment, preload browsers on their devices.

“We also work with network operators and make a customised version of our browser that allows us to enjoy revenue related to traffic and services,” says Von Tetzchner. Globally the top 30 mobile operators own 75% of the world’s mobile subscribers, and Opera has agreements with 12 of these, which represents some 1.2 billion subscribers or more than 25% of the market.

Von Tetzchner says that in developed markets mobile is often a second choice in terms of getting on the Web, but in developing markets it is often the primary connector. “We think that for a lot of people who will not get PCs and will not get infrastructure anytime soon, the mobile phone remains a very viable way to access the Internet. The amount of traffic going through mobile phones is increasing, together with the amount of page views, and the like. This is a way to give the wealth of what is available on the Internet to these people in the shortest amount of time,” he says.

A lot of Opera’s growth has come from emerging markets where it is the dominant mobile browser because, although suitable for premium devices, the browser’s magic lies in being able to operate on a wide range of entry level phones and older devices that dominate developing markets. Oslo-based telecoms analyst Andre Adolfsen confirmed this, telling Bloomberg, “They seem to be the best choice for low-bandwidth countries. When improved bandwidth and smartphones penetrate these markets as well, I believe Opera will struggle to compete with major original equipment makers such as Google, Apple, Microsoft and maybe Nokia.”

In July this year more than 445 million megabytes of data flowed through Opera Mini helping drive revenues of some 209,2 million kroner (R 248,4 million) for Opera on Internet devices (mobile, television and other non-PC devices) for the first half of this year. That’s just less than double of what Opera made from desktop revenues for the same period.

Not too bad for a company that was started with only a few thousand dollars. “We began Opera with $7,000 in starting capital, and that lasted us for five years. That’s the minimal amount of money you need to start a limited liability company in Norway. It taught us to be careful with money. As a start-up with a small base of staff we tried to focus on the product and the end user, but tried to remain adaptable to user’s needs. When you don’t have marketing muscle and you’re competing against huge global players, you have to innovate, you don’t really have much of a choice. You have to differentiate for people to like your product not only enough to use it, but to start telling their friends about it,” says Von Tetzchner, who adds that between 800,000 to a million Opera browsers are downloaded each day. “Almost all of this is through word-of-mouth, trying the product, liking it and telling their friends.” That’s helped Opera build a user base of about 120 million active users, more than half of which are from mobile markets.

HTML5 is said to be the big game changer in the browser market. HTML5 is the new Web standard that pundits believe will fire renewed vigour into browser development, bringing big rewards for users. Microsoft has delivered a pleasing salvo in what is being termed the next round of the browser wars, with the beta version of IE 9 that has been well received by everyone, but its competitors. IE’s answer is something that Microsoft is calling “hardware acceleration” which Redmond spin says the software giant pioneered. In short, this is where the browser delegates intense tasks to the computer’s graphics processor. The result is the browser “holy grail” –  a significantly speedier and smoother experience.

But an angry Mozilla Firefox was quick to react to Microsoft’s statement that “IE9 is the first and only browser to deliver full hardware acceleration of all HTML5 content” by saying the browser giant was misleading the media and disseminating untruths. Not to be left out of the action Google Chrome too declared that hardware acceleration was a feature of its design.

Microsoft’s sitting on a war chest of $36 billion which could go some way to arming those friendly folks from Redmond for the next round of browser battles, but regardless of who comes out the dominant player, consumers will be the winners as browsers become better than they’ve ever been before.

And what about Opera? According to Bloomberg there’s a war going on between mobile operators and cellphone manufacturers because the likes of Nokia, Apple and Google straddle both device and software markets. Operators and device manufacturers without software resources will fight back by partnering with the likes of Opera Software, and that’s where the Norse browser company’s future probably belongs. DM

Read more: “The browser wars are back” on CNNMoney, ”Microsoft releases newest version of Web browser” on Reuters,  “Opera Gets Sales Boost as Carriers Target Apple, Nokia Services” on Bloomberg, “Google: Chrome will be 60 times faster” at InfoWorld.