Malema spins his way to NGC victory, lectures on discip...

Malema spins his way to NGC victory, lectures on discipline 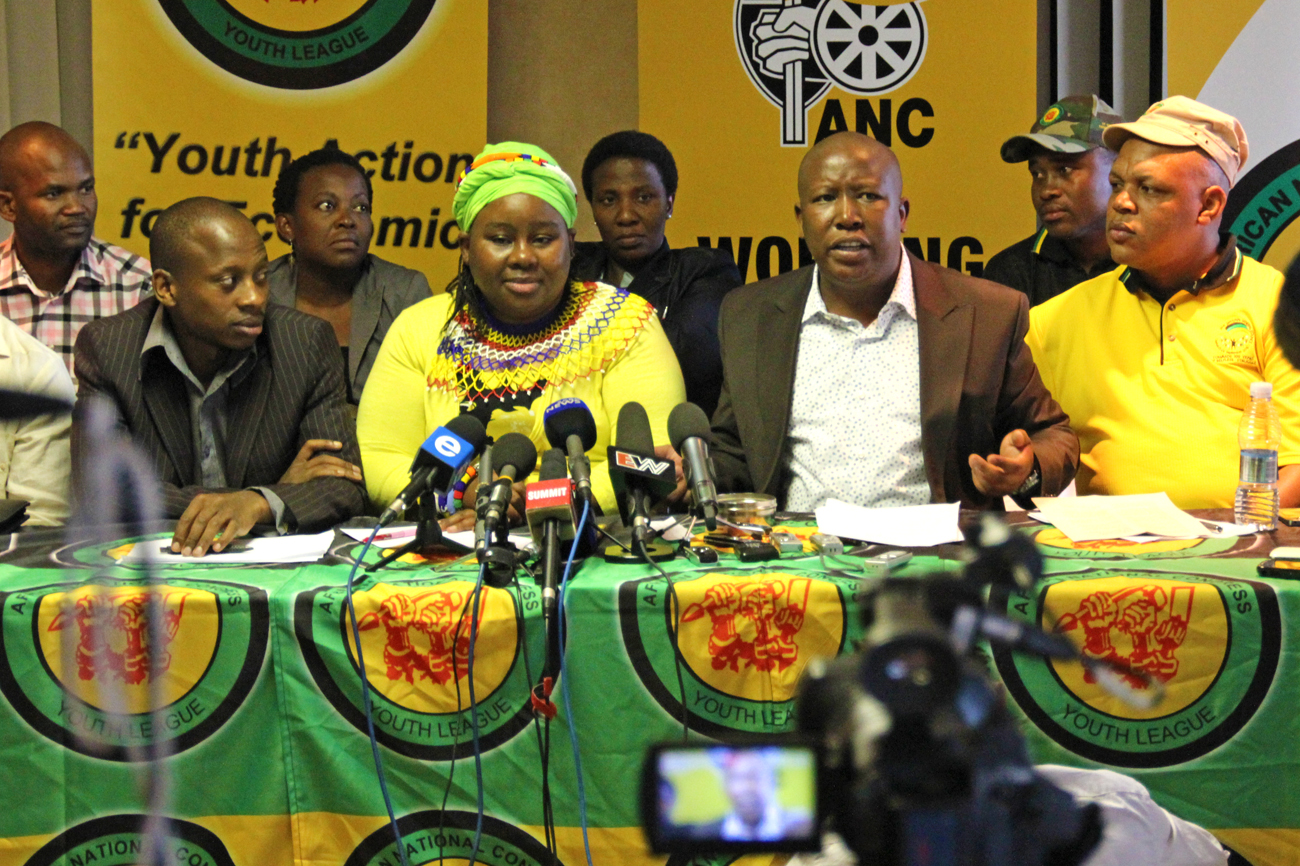 Just a week ago in Durban, Julius Malema was a dejected, defeated figure. But on Thursday he pulled of an award-winning performance of ease and relaxation, saying the ANC Youth League had won ground at the national general council meeting in every area except one (the matter of his suspended disciplinary sentence) and that doesn't matter anyway. Because he, and the Youth League, are very models of disciplined ANC cadres. Just like every other ANC leader – with the very notable exception of Zwelinzima Vavi. By PHILLIP DE WET.

The ANC Youth League had a lot to say, when it faced the media for the first time after its comprehensive defeat in Durban last week. It spoke of conspiracies against its very existence, journalists in league with its enemies and just how very disciplined it and its leaders are.

But mostly it wanted to talk about what a magnificent victory it had achieved at the ANC’s NGC – notwithstanding all evidence to the contrary.

From where we’re standing, it looks awfully like the Youth League had its push for the nationalisation of mines sandbagged, its efforts to install Fikile Mbalula as its man on the ANC’s top six torpedoed and its determination to have Malema’s suspended party sentence (from the last time he tangled with Jacob Zuma) reversed.

The Youth League agrees on that last point, sort of. It says it raised the issue of Malema’s sentence, was thwarted in its efforts and will keep arguing against it right up to the next national ANC conference in 2012. It also managed to slip in an accusation that Gwede Mantashe, who increasingly seems to be in its crosshairs, used bureaucratic means to help engineer that. In all other respects, however, it is claiming victory, or near-victory in the single case of getting the Constitutional clause that prohibits expropriation of property without compensation.

Mine nationalisation? Got it on the agenda. Generational mix? Re-affirmed as party policy. Swaziland? An intensification of work towards its democracy. Free sanitary towels? Movement on getting it “practicalised as urgent as possible”. And so the list goes.

Most telling, however, was what Julius Malema had to say, and how he said it. Though he didn’t match his all-time-best levels of oration, he was confident, relaxed, even friendly. At the same time he subtly backtracked on a whole range of issues, while not-so-subtly praising the likes of Jacob Zuma and Gwede Mantashe.

For example, Malema on mine nationalisation: “We are not engaged in a war, there is no blood on the floor. It is a debate on how do we better our lives as South Africans.” And, “It’s not me. It’s not my thing. It is what the ANC has been speaking about in the past.”

Or Malema on how he and his League are viewed by some in the ANC: “Sometimes people confuse fearlessness with being disrespectful.”

Malema, aided by ANCYL secretary general Vuyiswa Tulelo, put forward a convoluted theory as to how the League campaign against multiple sexual partners had nothing whatsoever to do with the polygamy practiced by Jacob Zuma, or Zulu King Goodwill Zwelithini, but mostly failed. Likewise, they claimed that ANCYL delegates to the Durban conference had had specific instructions not to advance the causes of any potential ANC leaders, because the conference was not an elective one, to an equally dubious reception.

But instead of coming out fighting on such issues, they effectively knuckled under to the ANC, and instead focussed their vitriol on three inter-related groups: plotters seeking to destroy the League, journalists captured by factions opposed to the League and Zwelinzima Vavi. In these areas the militancy on which the organisation so prides itself, and which Malema says is encoded in its very DNA, remained. And in the linking of the three we may just be seeing a strategic direction. If Vavi keeps up his strong rhetoric about a predator state and ANC corruption, and is called before an ANC disciplinary committee, don’t be surprised if the ANCYL claims that as its own victory, plus proof of a conspiracy against it that involves biased journalists. If it manages to sell that line, then it really will have transmogrified defeat into victory. DM