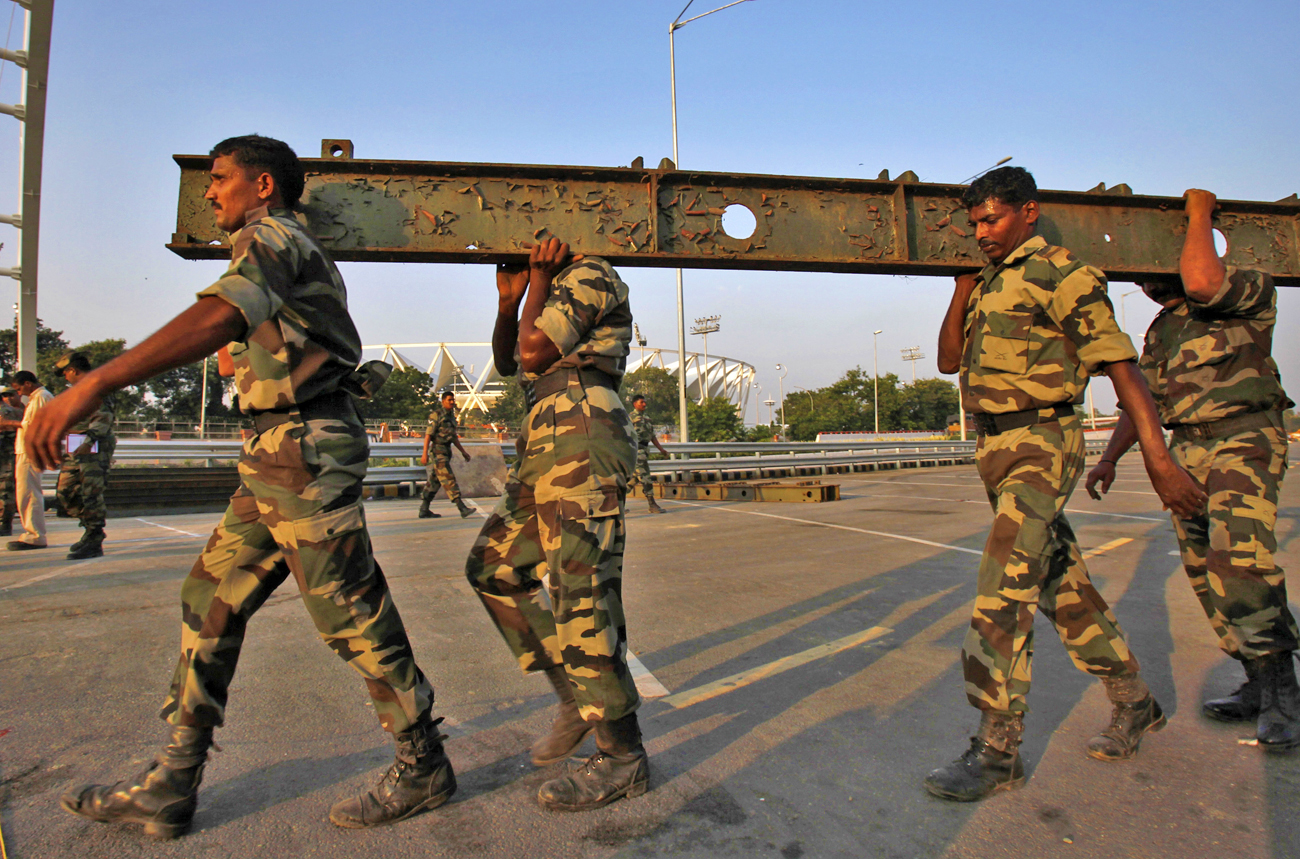 It’s less than a week until the official opening of the Commonwealth Games, and tensions in Delhi continue to mount. City residents are fervently hoping that the problems can be overcome so that the spotlight is on sport, rather than mismanagement. The outlook now seems to be hesitantly optimistic, with the powers that be renewing efforts to fix the countless problems – they’ve even deployed extra langur monkeys to chase away their pesky cousins. VRINDA MAHESHWARI reports from Delhi

CWG Organising Committee chairman, Suresh Kalmadi, said on Monday that all major problems in the athletes’ village had been resolved and that most of the flats were ready for occupation. His boasts are proud indeed. The Hindu quotes him as saying: “We have done whatever that had to be done. Whatever problems were there earlier have been sorted out. I don’t think they have seen a Games village like this anywhere else. There is no more scope for improvement.”

It’s probably true that no one’s seen a Games village like this before, but we’re not sure we can trust Kalmadi’s assertion that there’s no more room for improvement. Nonetheless, his optimism is mirrored by other officials involved in the handling of the Games. Delhi chief minister Sheila Dikshit has stated that the entire village will be prepared by Wednesday. About 8,000 athletes from 71 nations are expected to arrive.

The athletes’ village had come under scrutiny for the lack of hygiene and the appalling living conditions. But athletes and teams that have started registering for the Games have given favourable reports, with many moving out of five-star hotel accommodation into the village. (The foreign players had been given the option of being shifted to a five-star hotel if they were not satisfied with the facilities at the village.)

The authorities are also on a promotional overdrive, with radio and TV adverts promoting the Games – in their new and improved form, of course – and even many Facebook albums doing the rounds. The photos on Facebook look appealing indeed. Obviously, some major sprucing up has taken place since last week, when very different photos of the athletes village were posted on the BBC website. The arrival of CWG officials in the city has led to a number of run-ins with the government. The beleaguered CWG chief executive, Mike Hooper, has been complaining that his comments are misrepresented by the Indian media, but reiterated that his concern was not Indian pride, but the proper and smooth functioning of the Games. His adverse comments about the “population hazard” in the capital city of Delhi angered many in the city, including Dikshit. Hooper had been scathing about allegations that the CWG organisation was also at fault for the controversies in the build-up to the event. In a statement made to Television New Zealand, he said that all responsibility and blame lay with the Indian authorities; this obviously did not sit well with the organisers back in India, who are facing enough flak as it is.

And it’s not only international media how are unhappy about the situation. The police are now enforcing traffic restrictions on the exclusive lanes that have been set up for the participants, organisers and support staff of the CWG, and many Delhi residents have been left stranded. Areas adjacent to the games village (set up in East Delhi) saw bumper-to-bumper traffic and many arterial roads into the city, such as the NH-24, were jam-packed. The 12-hour long restrictions, lasting from 8am to 8pm, are going to be in place while the Games last, and aim to shield the participants from the mad Delhi traffic.

However, the traffic police have not been blind to the problems, and visibly higher number of traffic personnel had been stationed across the city to facilitate the flow of traffic, especially in areas where the athletes are going to be passing through. The traffic police are being exceptionally strict, with a fine of 2,000 rupees (just over R300) being imposed on anyone straying into the reserved CWG traffic lane.

But the citizens, at least those wealthy enough to own cars, have some cause for celebration as well. The so-called Blue Line Buses – privately owned buses that run on the public bus routes under charter – have been removed from the roads, and most residents are breathing a sigh of relief. About 1,600 Bluelines on 132 routes were removed from the roads on Sunday, ahead of the CWG. The affected routes are ones those passing through the Games venues, and the Games village.

Another aspect of preparation for the Games is a venture by the civic authorities involving, well, some monkey business. The “monkey menace” is a problem in the city and New Delhi Municipal Council (NDMC) has pre-emptively hired ten extra langurs (Old World monkeys of the Colobinae subfamily) to scare away other monkeys from the critical areas near sporting venues. The tally of langurs now reaches 38. Talkatora Stadium (hosting swimming events) and Shivaji Stadium (where hockey practices will take place) are known to be monkey haunts. The NDMC is hoping to avoid embarrassing and dangerous attacks by monkeys, who have been known to kill humans.

Watch a trailer of the documentary, The Policing Langur.

As well as those pesky monkeys, snakes have also been making the lives of CWG official difficult, with a snake found slithering around in the rooms of the South African envoy on Sunday. The South African High Commissioner Harris Mbulelo Mejeke initially had stern words about the unsuitable living conditions, but has now gone on record to say that improvements have been made and that he was impressed by how well the grievances have been handled. On Monday The Economic Times quoted him as saying: “People who are preparing our athletes’ area are doing great work and we are impressed and it is unlike what I saw yesterday.”

A number of top athletes have withdrawn from the Games because of health or safety concerns, and this fact, coupled with the pre-existing tension about the quality of infrastructure that has been put in place, has put the residents of Delhi on edge. Spreading epidemics and monsoon woes, on top of the humiliation faced because of the mismanagement of the Games, has made life bitter for the residents of Delhi during the last few weeks. Finally, they are seeing a ray of hope. With the management cleaning up its act and the foreign athletes expressing satisfaction with the provisions, Indians are starting to become optimistic about the CWG as well. A number of citizen initiatives involving clean-ups and traffic regulation have been set up in the spirit of showing one’s best face to the world for the CWG. It is only to be hoped that the next few weeks bear out this belief and confidence. DM

Photo: Indian army soldiers work to rebuild a collapsed pedestrian bridge outside the Jawaharlal Nehru Stadium in New Delhi September 25, 2010. Commonwealth Games Federation Chief Michael Fennell said on Saturday there was still work to be done amid concerns about security before India’s showcase event starts next week, but that it would go ahead with all countries taking part. REUTERS/Adnan Abidi