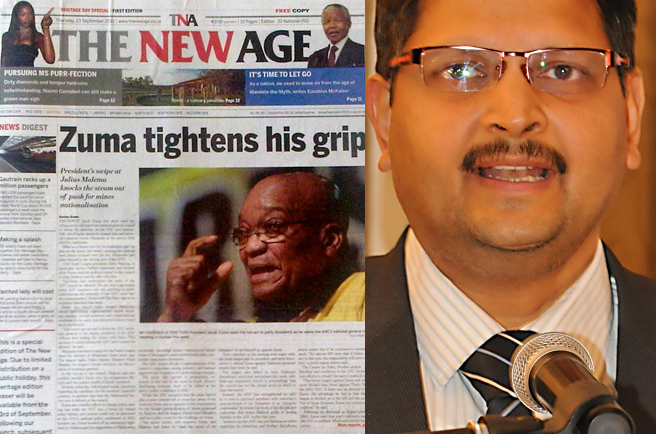 Following the ANC’s enthusiastic endorsement of Atul Gupta’s The New Age, the billionaire businessman and pro-government press funder was arrested, released and had charges against him for obstructing justice dropped. Now claims of harassment and xenophobia have been levelled against police by a Gupta spokesperson. By MANDY DE WAAL.

As the ANC’s national general council drew to a close last week, Pallo Jordan held up a copy of The New Age that had been printed and specially delivered to the conference. Jordan used the paper to declare a South African government under ANC rule friendly to the media.

The senior ANC member and former minister of arts and culture later pressed his point home in an opinion piece carried in The Sunday Times which liberally quoted Gupta, The New Age’s financier, and motivated the need for a pro-government press. That endorsement, together with the fact that the debut edition of The New Age was heavy with government adverts, showed Gupta’s good news daily hit the right note with the ruling party.

Zuma has been criticised for his close relationship with the Gupta family. Two of Zuma’s children benefited from business interests with the Guptas, and the president’s son, Duduzane is on the board of Sahara Computers and involved with the billionaire business family’s controversial mining interests. This influence wasn’t enough to stop Gupta from being arrested on charges of obstruction of justice, despite his protestations that he knew national police commissioner, General Bheki Cele. The Sowetan reported that Gupta was due to appear in the Randburg Magistrate’s Court for refusing to comply with police requests after being stopped on the R55 highway over the weekend. The report stated that Duduzane and other management from Sahara Computers arrived at the police station shortly afterwards. Cele’s spokesperson, Nonkululeko Mbatha went on record and said Cele wouldn’t interfere and justice would be served regardless.

Later Sapa and IOL News reported that a traumatised Gupta had broken down, wept and declared “I am mentally broken” on the steps of the Randburg court. Gupta’s lawyer, Cliff Alexander, said charges against the billionaire businessman had been dropped. “He refused to be searched because they (the police) didn’t have a search warrant and there was no suspicion of anything. Mr Gupta was treated for xenophobia because they said he must go back to India,” said Alexander.

Speaking to Sapa, Gupta spokesperson, Gary Naidoo of TNA Media said Gupta didn’t resist being searched and that the police were hostile. Naidoo denied earlier reports that Gupta had threatened to phone the police chief and get the officers at the scene fired.“He does not even know General Cele. He has not met him and neither has he ever spoken to him.”

It is unclear whether Gupta will press charges, and as the drama unfolds it will be telling to see how it is covered by The New Age. The special Heritage Day edition of the paper showed a large photo of President Zuma gesticulating and declaring that his patience with party “dissidents” had diminished. The story that accompanied this was headlined: “Zuma tightens his grip”. Alongside articles about Lady Gaga, Steve Hofmeyr and advice telling men to be circumcised to prevent Aids, were political pieces on the NGC scuttling the ANCYL’s nationalisation plans, an announcement that Gwede Mantashe was abandoning the SACP and the ruling party’s strategy for electing better candidates.

The paper also strangely enough featured two letters to the editor from readers. One stated that Joe Thloloe, the Press Ombudsman, had missed the point regarding the media appeals tribunal, the other stated that Cosatu had “realized riches for the select few”. From a design perspective, the newspaper used a range of type fonts which made the paper look slightly disjointed, while, aside from the obvious currying ANC favour, the editorial focus appears fragmented.

The New Age has moved some way from Essop Pahad’s protestations in July that the newspaper was a purely private venture. “I have said in the (PR) statement that it is not a pro-ANC newspaper, but let me repeat it please. It is not and will not be an ANC-affiliated newspaper to start with because this is a purely private venture.” Pahad is a director and senior advisor to TNA Media which publishes The New Age.

The New Age featured two full-page advertisements from the Free State provincial government, a full-page advertorial from the department of arts and culture, an advert promoting investment in Gauteng from the Gauteng Tourism Authority, an ad from the Gauteng provincial government and the departments of communication and public works. Other ads were from Gupta’s own Sahara Computers and Mvelaphanda which was founded by Tokyo Sexwale.

There was also a retail presence in the newspaper with adverts for Russells, OK and House and Home. Retail advertisers are the lifeblood of a declining print industry and are the biggest investors in newspaper media spend.

When making media buying decisions, advertisers usually consider audited circulation figures, together with factors such as the reach and leverage a medium has with its readers, rather than the ruling party. But the new and unproven press had lots of pull, including interestingly enough with India’s telecommunication giant, Bharti Airtel which invested in a double-page spread promoting a local sporting event.

The telecoms company recently concluded a 100% acquisition of Zain, the Kuwaiti mobile brand with a strong presence in Africa. Bharti Airtel wants to penetrate the continental market aggressively and made a failed bid for MTN in 2009. Bharti Airtel may have another chance with Cell C which enjoys an existing relationship with Zain, which is now wholly owned by Bharti. At the time of announcing the partnership, ITWeb reported that industry insiders were surprised the deal didn’t to go to MTN. Cell C has been working doggedly to increase company value with aggressive plans to grow its consumer base and enhance its network.

It will be interesting to watch what foothold Bharti Airtel secures in South Africa, but not quite as intriguing as watching the drama around Atul Gupta’s brush with the law unfold amid allegations of police xenophobia.

After missing a September launch date, The New Age publishers set 20 October as the D-Day for its actual launch. Reports from insiders, however, pointed to technical problems and a large number of yet-to-be-appointed journalists and other positions waiting to be filled as the reason that target date difficult to reach. DM

Read more: “Gupta pursues legal action against cops” at TimesLive, “Zuma incorporated” in Mail & Guardian offers a list of some of the businesses owned by Zuma’s family and friends, “Is it a crime to do business with Zuma’s son?“ in Business Report, The New Age tells Moneyweb it will not cover Gupta story. The ‘epaper’ of The New Age’s first government-sponsored newspaper.