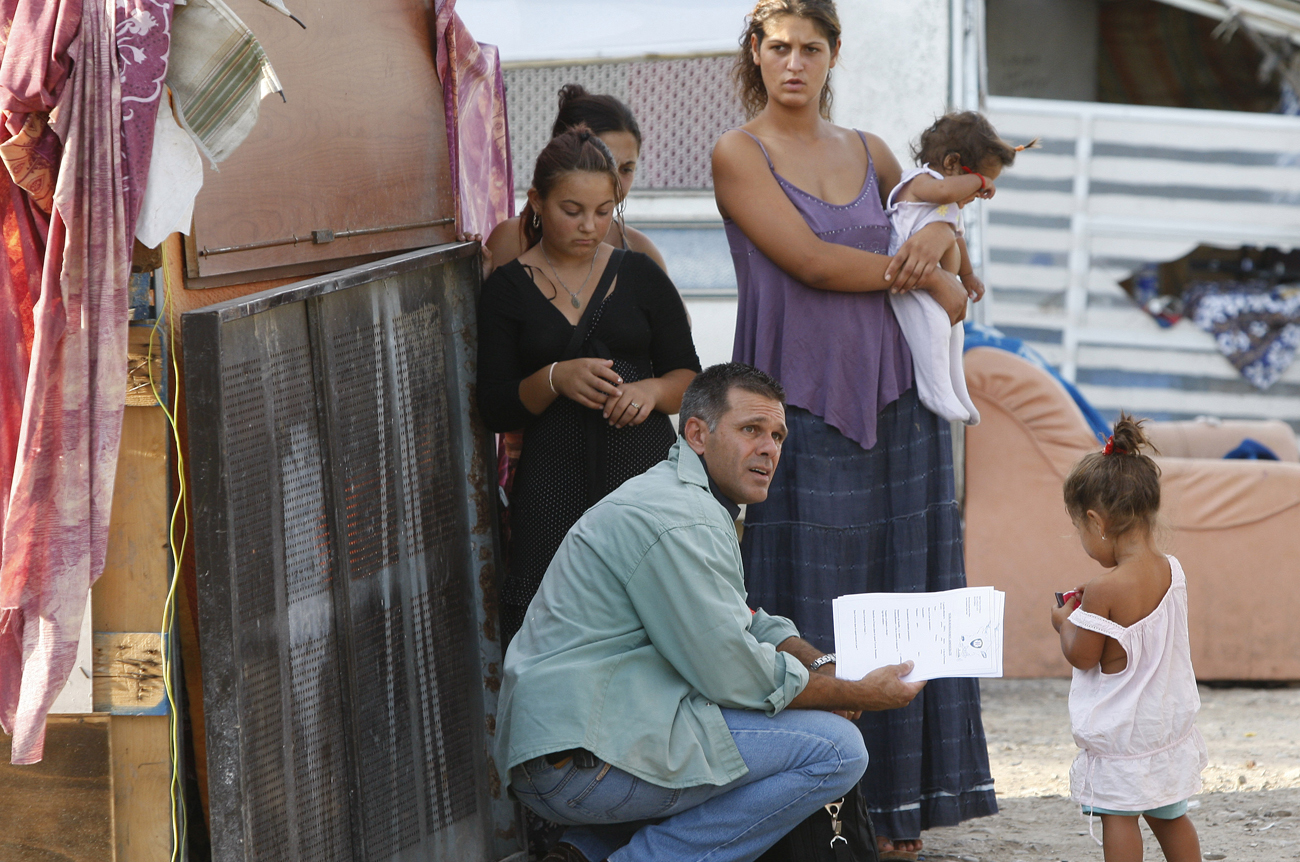 In early September, French president Nicolas Sarkozy offered the Roma in his country 300 euro a head to leave voluntarily. Those that declined the offer, he suggested, could watch while their homes were destroyed. The ensuing ruckus within the European Union said a lot about the continent’s future, but perhaps more about its past. By KEVIN BLOOM.

The children’s picture book image of the “Gypsy” is one of romance; a family in exotic clothes camped in a clearing in the forest, a pot steaming on an open fire, a wooden caravan with lush curtains and painted wheels ready to move at leisure to the next destination. But then it’s only the child, with his awe at the concept of the nomad, who’s able to believe that the lives of these people are in any way enviable. Adults know that in the Europe of 2010 and stretching back hundreds of years, the Roma have been one of the most persecuted and reviled of ethnic groups. Even Charles Darwin, writing in 1871, singled them out for not being “culturally advanced” like other “territorially settled” peoples, and so why would any right-thinking adult want to live like them?

Darwin said that about the Jews as well, of course, and he got away with it because he wasn’t saying anything that his readers (apart from the Jews and Roma amongst them) didn’t take to be self-evidently true, like the colour of the sky. Through the ages, racist attitudes towards these two groups weren’t thought of as wrong; they were thought of as natural, immutable, a necessary and intrinsic part of history. As Ian Hancock, probably the world’s most pre-eminent academic on the subject of Roma (or Romani) culture, writes in his book We are the Romani people: “When the Nazis came to power in 1933, German laws against Romanies had already been in effect for hundreds of years. The persecution of the Romani people began almost as soon as they first arrived in German-speaking lands because as outsiders they were, without knowing it, breaking the Hanseatic laws which made it a punishable offence not to have a permanent home or job, and not to be on the taxpayers’ register. They were also accused of being spies for the Muslims, whom few Germans had ever met, but about whom they had heard many frightening stories; it was not illegal to murder a Romani and there were sometimes ‘Gypsy hunts’ in which Romanies were tracked down and killed like wild animals; forests were set on fire to drive out any Romanies who might have been living there.”

Famously, the Nazis ended up slaughtering between 220,000 and 1,5 million Roma during the Third Reich, the discrepancy in the number being a function of the fact that it was easier for Hitler’s obsessive bureaucrats to keep a running tab on the more organised Jews. Whatever the actual number, where the Jews used the term “Sho’ah” (Holocaust) to describe the decimation the Roma called it “Porrajmos” (The Devouring), and Hancock writes that almost the entire population was exterminated in Croatia, Estonia, Lithuania, Luxembourg and the Netherlands. Still, after the war, when reparations were paid to Jewish survivors, the Roma got nothing from a German government that argued as follows: “It should be borne in mind that Gypsies have been persecuted under the Nazis not for any racial reason but because of an asocial and criminal record.”

It’s no surprise then that Romania, where it’s believed that the most Roma were killed – Hancock’s estimate is a drop from a pre-war population of 300,000 to a total post-war of 36,000 – took until October 2007 to formally apologise for the Porrajmos. This was some six months after the Romanian president who made the apology, Traian Basescu, had publicly insulted a journalist by calling her a “stinky Gypsy”. Photo: Supporters of Bulgarian nationalist organisations shout anti-Roma slogans during a rally in central Sofia September 25, 2010. Several hundred people gathered in a protest against what they called “gypsy terror”, stating that Roma allegedly commit a lot of crimes but remain unpunished. The signs read (L-R) “No to the gypsy terror and invasion!”, “The people against the gypsy terror!” and “Security for the normal people – criminal gypsies in prison”. REUTERS/Stoyan Nenov

So in early September 2010, when French president Nicolas Sarkozy offered the Roma in his country 300 euro a head to leave voluntarily – and to bulldoze the homes of those who didn’t – it seemed to many that he was simply following tradition. As the New York Times explained in a front-page piece that ran two weeks later, Sarkozy angrily dismissed claims that he was singling out the Roma for deportation and refused a request by European leaders to stop dismantling their camps, which then prompted the European Commission to threaten legal action. The Times, contextualising the deportations against the backdrop of the economic downturn and the expansion of the European Union to include Romania and Bulgaria in 2007, was careful not to lay the blame solely at Sarkozy’s door.

“Much of Western Europe has reacted with hostility to itinerant Roma,” the report stated, “who often have little education or practical skills. Some Roma have found marginal jobs collecting scrap iron or painting houses. But others have signed up for welfare or drifted into begging and petty thievery, living in unsightly camp sites.”

And yet the unavoidable fact is that Sarkozy, in attempting to appeal to the rightwing elements of the French electorate, has created a precedent in the EU – his deportation policy calls into question the long-term viability of the zone’s “open border” philosophy, even if in the short-term most of the deportees will return to France after a paid holiday. More worrying than that, though, is the failure of countries like Romania to make good on the promises of their pre-accession phase, when they committed themselves to a decade of “Roma inclusion”.

An article in the UK’s Prospect magazine provides the socioeconomic evidence of continued non-inclusion: “In Slovakia the Roma make up just 10 per cent of the population in normal education but 60 per cent in special schools. Less than 4 per cent of Hungarian Roma attend university. In 2009, over a fifth of Roma children in Hungary had been placed in special schools, cutting them off from the mainstream and consigning them to classes for the handicapped. Less than 10 per cent matriculate. These are the numbers of misery.”

What these numbers reflect is the consequence, seen time and again throughout European history, of being a people without a land. The most pertinent difference between the fate of the Jews after 1945 and the fate of the Roma is that the former achieved nationhood. The Roma, as the abovementioned Prospect article suggests, are still “waiting for their Herzl”. DM

Main photo: A plainclothes French policeman inspects an illegal Roma camp in Aix-en-Provence to control and check the identity of its residents on August 19, 2010. France sent dozens of Roma home on flights to Bucharest on Thursday in the first mass repatriation since President Nicolas Sarkozy unveiled a crackdown on crime and immigration with the dismantling of some 300 illegal camps that has been condemned by rights groups. Some 60 Roma left on a chartered plane from Lyon and about a dozen boarded a flight from Paris, the first wave of transfers in a campaign to send 700 people living in squalid camps across France back to Romania and Bulgaria by the end of the month. REUTERS/Philippe Laurenson