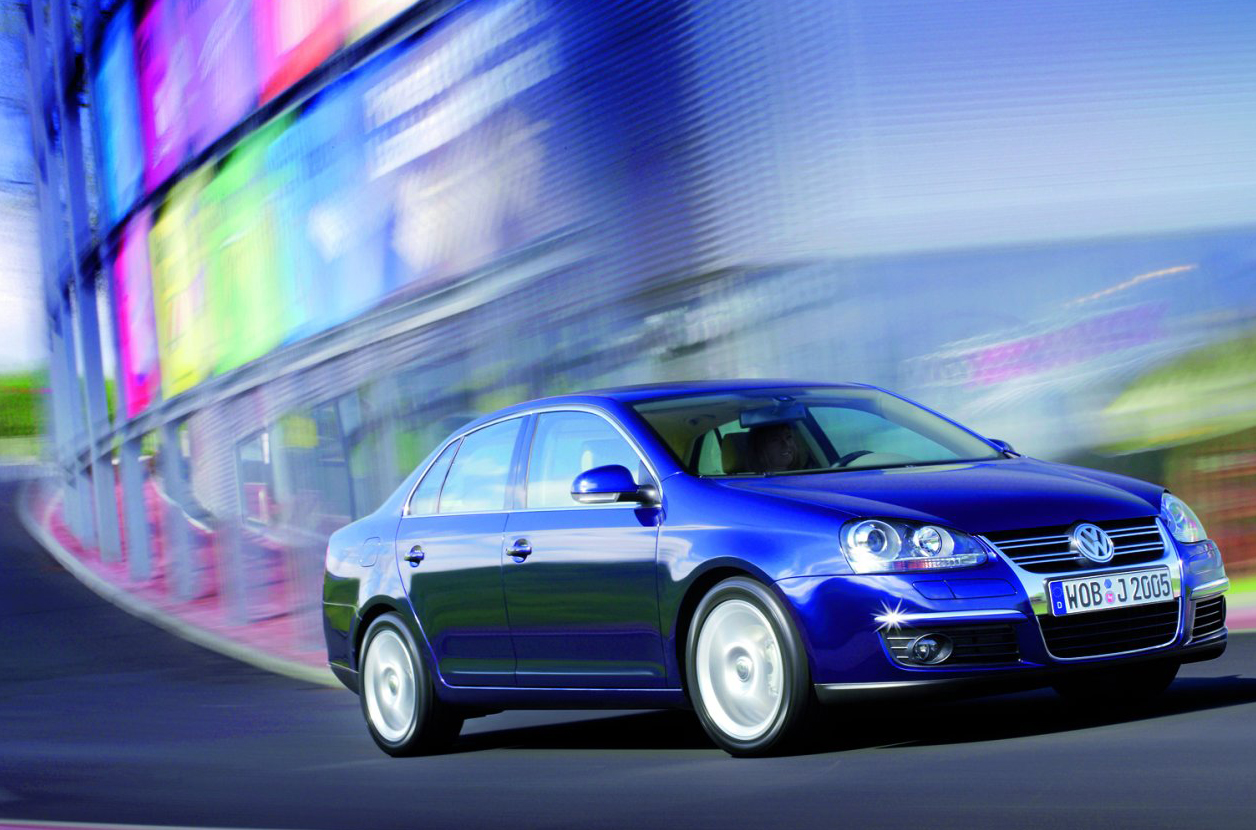 Sedans used to be the dominating force of South African motoring. But gradually, these four-door-and-a-boot machines have fallen prey to a new generation of smaller, lighter and more contemporary passenger cars. Which has put sedans such as the evergreen Volkswagen Jetta under serious threat. Or has it? By DEON SCHOEMAN.

For many South Africans, the Volkswagen Jetta used to be the quintessential compact sedan. It shared its platform with its Golf hatchback sibling, and offered a winning motoring formula.

The key ingredients were attractive, but inoffensive styling, a comfortable interior, reasonable performance – and, most of all, a cavernous boot. In fact, the European-conceived Jetta was the perfect protagonist to go up against the all-conquering Toyota Corolla from Japan.

But the motoring landscape has changed – and so has the Jetta.

Today, the fifth-generation Jetta can hardly be described as compact. It’s grown in length and width (and girth). And it’s taken on a certain regal presence that is more reminiscent of the larger Passat, than of a Golf with a boot – which is, after all, what the Jetta started out as.

That increase in size has also made the Jetta more difficult to categorise. It’s too big to be called a compact saloon, but too small to be slotted into the medium category. It  still looks a bit like a Golf from the front, but it’s Passat-like from the rear. And in terms of character, it’s more innocuous than interesting. That said, the Jetta is not an unattractive car. The sedan’s lines are smooth and sleek, its presence understated and upmarket. The rear can look a bit too high, and too heavy, from some angles, although the overall effect is smart enough. But sexy? Certainly not!

Not that VW will be too perturbed by this apparent lack of emotive appeal. It will argue that the real beauty of the sedan lies under the skin. And that means sampling the car’s virtues (and shortcomings) at first hand.

The Jetta under scrutiny here  is one of nine model variants on offer locally. The mid-range 1.4 TSI Comfortline looks very much like any Jetta in the line-up and you need to be an expert to pick up the few external clues that distinguish it from the rest.

Those clues include smallish (by modern standards), but sensible and handsome 16-inch alloy wheels shod with 205/55 R16 low-profile rubber, a fair amount of colour-coding, and some subtle TSI badging.
But what the Jetta lacks is aesthetic sparkle: if this was a girl at a party, the Jetta would be the one nobody noticed …

So, in purely visual terms, the Jetta won’t set any pulses racing. Which means that to find out what makes this car tick, you need to dig a little deeper. And let’s start that digging in the cabin – which is, after all, where Jetta owners will spend most of their time. Open the doors, and you’ll be confronted by an interior that exudes space and comfort. In fact, if you didn’t know this was a Jetta, you could be forgiven for believing that it was a bigger – and more expensive – car.

Admittedly our test vehicle  had some options to add to the luxury thrill, including a satnav system costing almost R30K. We’d rather buy a Garmin for a tenth of that price. The leather upholstery adds a further R11 000. CD changer? Another R4 000.

ESP stability control is also on the options list and costs six grand. Given the positioning, performance potential and price of the car, we believe ESP should be standard.

All in all, the extra kit inside this Jetta would set you back around R50 000.

Even so, what does come as standard is all that space, comfortable seating, high comfort levels, and a specification list that includes electric windows, remote central locking, air-con, power steering, cruise control and auto-activating windscreen wipers.

Rear accommodation is better than it looks, and even three adults at the back isn’t too much of a squeeze. The boot is truly cavernous, reiterating the big-car feeling, while allowing the family to pile in about as much holiday luggage as they like. And hallelujah – there’s a full-sized spare wheel, too.

The Jetta 1.4 TSI’s biggest surprise, however, is the engine. For a car of this size, the notion of a humble 1400cc unit is hardly promising – except that this isn’t your average 1400. It uses a turbocharger to boost power and torque, both from low engine revs. The stats claim 90kW and 200Nm – but in reality, it feels more.

But the four-cylinder unit still offers all the small-engine benefits – low fuel consumption, low emissions – but combined with more than decent performance. Expect technologies such as these to dominate the motoring of the future …

Not surprisingly then, the Jetta is a lot more satisfying to drive than its taciturn styling suggests. Get behind the wheel, fire up the engine, and the momentum on offer as soon as you tickle the loud pedal is much more than expected. In fact, think two-litre power, and you get some idea of what the 1.4 TSI feels capable of in practice.

It gets the Jetta off the mark with brisk enthusiasm, although there is a little bit of lag at the bottom end of the rev range – a malady more marked in the Highveld’s thin air than at coastal levels, and exacerbated by a clutch with a sharp take-up. However, once on the move, the shove is strong and consistent, combined with revs that rise quickly.

As a result, progress is brisk and resolute enough, while a good set of gear ratios keeps the engine on the boil. There’s always enough power for overtaking, and in-gear acceleration is impressive. The VW sedan posts a 9,5 second acceleration time from zero to 100, while top speed is a respectable 200km/h. The Jetta’s road manners are safe and predictable – a bit like the rest of the car. Straight-line stability is good and ride comfort excellent, even on the mostly unforgiving surfaces so typical of our roads at the moment – especially the rural ones.

The 1.4 TSI also handles well enough, with plenty of grip and good inherent poise. The steering lacks feedback and feels over-assisted at higher speeds, but does better around town. The Jetta does turn in willingly, but understeer is quickly induced if you enter a corner too quickly.

Fuel consumption is excellent for a large car powered by a small engine: VW claims 6,2 litres/100km in the combined cycle, and an open road figure of 5,1 litres/100km. Our test average, involving lots of hard driving, came to around 8 litres/100km, which is pretty good under the circumstances.

The Jetta 1.4 TSI Comfortline is one of the most underrated cars in the VW stable. It’s neither ugly nor sluggish, but it commits the ultimate motoring sin by being innocuous. In a country where emotions often override rational thinking, that’s not a good thing

However, a test drive soon sets aside any prejudices, and proves just how all-round competent the Jetta actually is.  The R242 000 list price is keen, although ticking some boxes on the options list can be an expensive exercise, and as mentioned, ESP really should be standard.

Factor in a five-year/60 000km service plan, good resale value, and running costs that are likely to be lower than you’d expect for a car of this size,  and the Jetta looks like a pretty good family car deal. In other words: the motoring landscape may have changed, but the Jetta still offers honest, satisfying motoring. DM