Commonwealth Games still up in the air over Delhi-dally...

Commonwealth Games still up in the air over Delhi-dallying 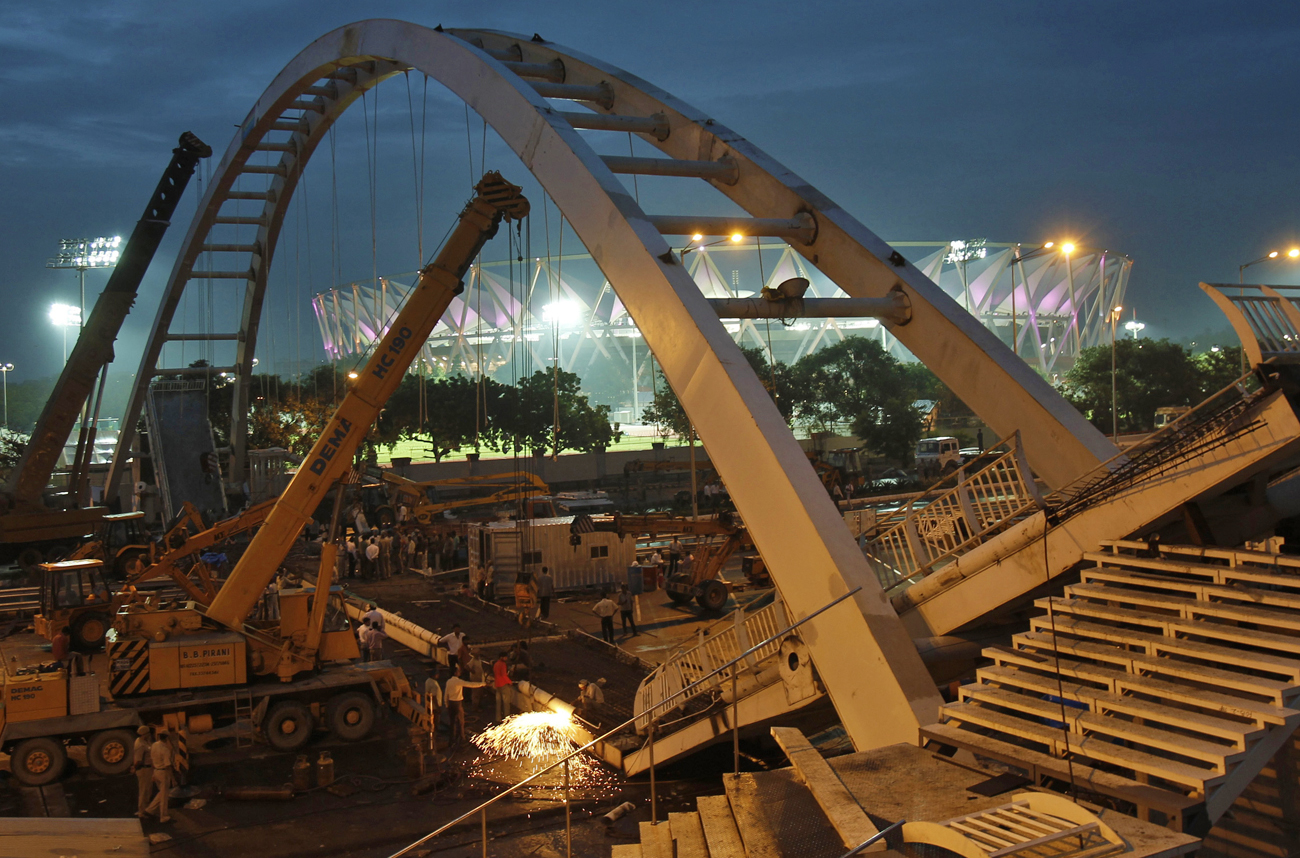 About now, Delhi should be a hive of feverish anticipation with the Commonwealth Games taking place in only ten days’ time - a chance for the city to showcase itself to the world. Instead, officials are in a frantic dash to get facilities up to scratch, and convince participating countries their athletes will be just fine. South Africa is giving them the benefit of the doubt, for now. By THERESA MALLINSON.

The Commonwealth Games are scheduled to take place in Delhi, India, from 3 to 13 October. There are just a few teeny-tiny problems to sort out before then: the state of the athletes’ village (and resultant health concerns), and tightening up lax security at Jawaharlal Nehru Stadium. Oh, and the annoying tendency of structures in and around the stadium to collapse and injure people.

“Many nations that have already sent their advanced parties to set up within the village have made it abundantly clear that, as of the afternoon of September 20, the Commonwealth Games village is seriously compromised.” On Wednesday, Fennell was on a plane to Delhi earlier than he had anticipated and is scheduled to meet Indian Prime Minister Manmohan Singh for emergency talks on Thursday.

At this stage, however, it’s unclear what mere talking will achieve. Sure, Singh can offer reassurances, but will anyone believe him? He needs to provide concrete proof of Delhi’s capacity to host the games; actually, he needed to have done so yesterday. (And by “yesterday” we mean many weeks or months ago.)

Finally, Singh seems to have realised the magnitude of the problems, and convened a crisis meeting late on Thursday. Meanwhile, Delhi chief minister, Sheila Dikshit, has organised hundreds of workers to clean up the athletes’ village. Federation head Mike Hooper told AFP on Thursday that there had been progress in dealing with the challenges. “My attitude is that the Games are on. We are working at the highest levels of government,” he said. Photo: A man removes rickshaws near a car which burst into flames near the scene of an earlier shooting in the old quarters of Delhi September 19, 2010. Gunmen on motorbikes shot at a tourist bus near the main mosque in the Indian capital on Sunday, wounding two Taiwanese visitors in an attack only weeks before the city hosts the Commonwealth Games. The Commonwealth Games is seen as a showcase event for India as it emerges onto the global economic and diplomatic stage. Some militant groups have threatened to disrupt the Games. REUTERS/B Mathur.

The state of the athletes’ village was initially the major cause for concern, with countries worried about the health of their teams. An advance party from New Zealand found the facilities were not ready, and accommodation problems included the fact that workers had defecated in the buildings. Reportedly, electrical and plumbing fixtures, as well as Internet connectivity, had yet to be installed in some rooms.

But the state of facilities is far from the only contentious issue. The safety of the stadium and surrounding structures was called into question on Tuesday, when a pedestrian bridge just metres from the Jawaharlal Nehru Stadium collapsed, injuring more than 20 workers. Then on Wednesday, part of the stadium’s false ceiling collapsed.

What is most worrying is that P&R Infraprojects, the engineering firm that built the bridge, was also involved in several other projects for the games, including erecting columns at the main stadium. The company has now been blacklisted by the Indian government (meaning it will be unable to tender for state contracts in future) and police are investigating the case. An official at one of the stadiums, was quoted in The Age as saying: “We have tested everything properly and are satisfied with the quality of work.” He did not indicate if the bridge had been subjected to similar “proper” tests.

However, despite the grave nature of the problems, the biggest threat could well come from security risks. Australian television network Channel 7 on Wednesday aired an exposé that showed a reporter carrying a remote detonation kit into the Jawaharlal Nehru Stadium, without being stopped by security officials.

The Delhi police slammed the report as “bogus and incorrect”. According to the police statement: “The reporter is trying to create a false impression of security breach by walking past barricades that have been placed on the main road only to divert vehicles. That place is far off from the main entry gate of Jawaharlal Nehru Stadium from where the actual manual checking of pedestrians is done.” That’s hardly reassuring because anyone trying to enter the stadium for nefarious purposes could, like the reporter, presumably find a way in without passing through a manual checkpoint.

However, security has been beefed up somewhat since then. All areas associated with the Games, such as the stadiums and village, went into lockdown as of Thursday morning, with only people with official passes allowed entry. If nothing else, the security plan for the Games certainly has numbers behind it. Security officials deployed in the city include the 80,000-strong Delhi police force, more than 17,500 paramilitary personnel, 3,000 commandos, and 100 anti-sabotage teams. In case that’s not enough, the army is on standby as well.

Notwithstanding the tens of thousands of people employed to protect athletes, several participating countries have threatened to pull out, with Scotland, Canada and New Zealand among those that have delayed sending their teams to Delhi. The South African Sports Confederation and Olympic Committee held a meeting on Wednesday to decide on whether South Africa would still compete.

After receiving a report from its fact-finding mission, Sascoc decided that “as things stand” South Africa would participate in the event, and Team South Africa is set to leave for Delhi on Sunday. However, Sascoc head Tubby Reddy didn’t preclude pulling out at a later stage. “The safety and health of Team South Africa are of paramount importance to us and if at any stage we feel this is compromised, we will not hesitate to bring the team back home,” he stated.

The team’s chef de mission, Patience Shikwambana, said they’d had a meeting on Wednesday with the team’s management. “We asked them several times [if any athletes had concerns about their safety],” she said “and their response what a bit slow.” Shikwambana said that if any individual athletes did come forward and wanted to withdraw from the competition for safety reasons: “The leadership would have to look at that and take a decision.”

Athletics South Africa board member Geraldine Pillay felt confident Sascoc would not put any team members in danger. “I haven’t had any calls from the athletes expressing concern; I think they’re also watching the news closely,” she said. Prominent individual athletes from other countries, including Australia’s discus competitor Dani Samuels, and England triple-jumper Phillips Idowu, have withdrawn from the competition, citing security and health concerns.

South African swimmer Roland Schoeman said he felt unsettled by Delhi’s lack of preparation: “Right now, we still don’t know if the Games are going to be cancelled or not… It could be postponed, or it could not. I’m supposed to leave in less than a week, so it’s just unsettling to know I’ve trained for a whole year for an event that might not even happen.”

The South African’s disagreed with England rugby sevens’ star Chris Cracknell, who on Thursday said the collapsed bridge was “small fry”. The Daily Mirror quoted Cracknell as saying: “We are going to the Commonwealth Games, for goodness sake. Think of all the guys fighting in Afghanistan – they are facing real danger.” Schoeman made the point that competitors in the Games are not soldiers with a duty to lay down their lives down for their country. “We’re professional athletes going to represent our country in what should be an elite event,” he said. “You can’t compare it (to war).”

South Africa is no stranger to criticism about a developing country’s capacity, or lack thereof, to host a big-ticket sporting event, and the Soccer World Cup surprised many detractors by passing off without a major hitch. Whether Delhi can achieve the same feat, if the Games do indeed go ahead, remains to be seen. From our side, we wish Team SA a safe trip to India. And we wouldn’t mind it if they bring back a medal or two as well. DM

Photo: Cranes work at the site of a pedestrian bridge that collapsed outside the Jawaharlal Nehru Stadium in New Delhi September 21, 2010. A footbridge being built for the Commonwealth Games in India collapsed on Tuesday, injuring 27 people and highlighting the raft of problems that have so far blighted the event, meant to showcase the emerging global power. REUTERS/Adnan Abidi.