Peugeot RCZ: More reasons for the French lion to roar

Peugeot RCZ: More reasons for the French lion to roar 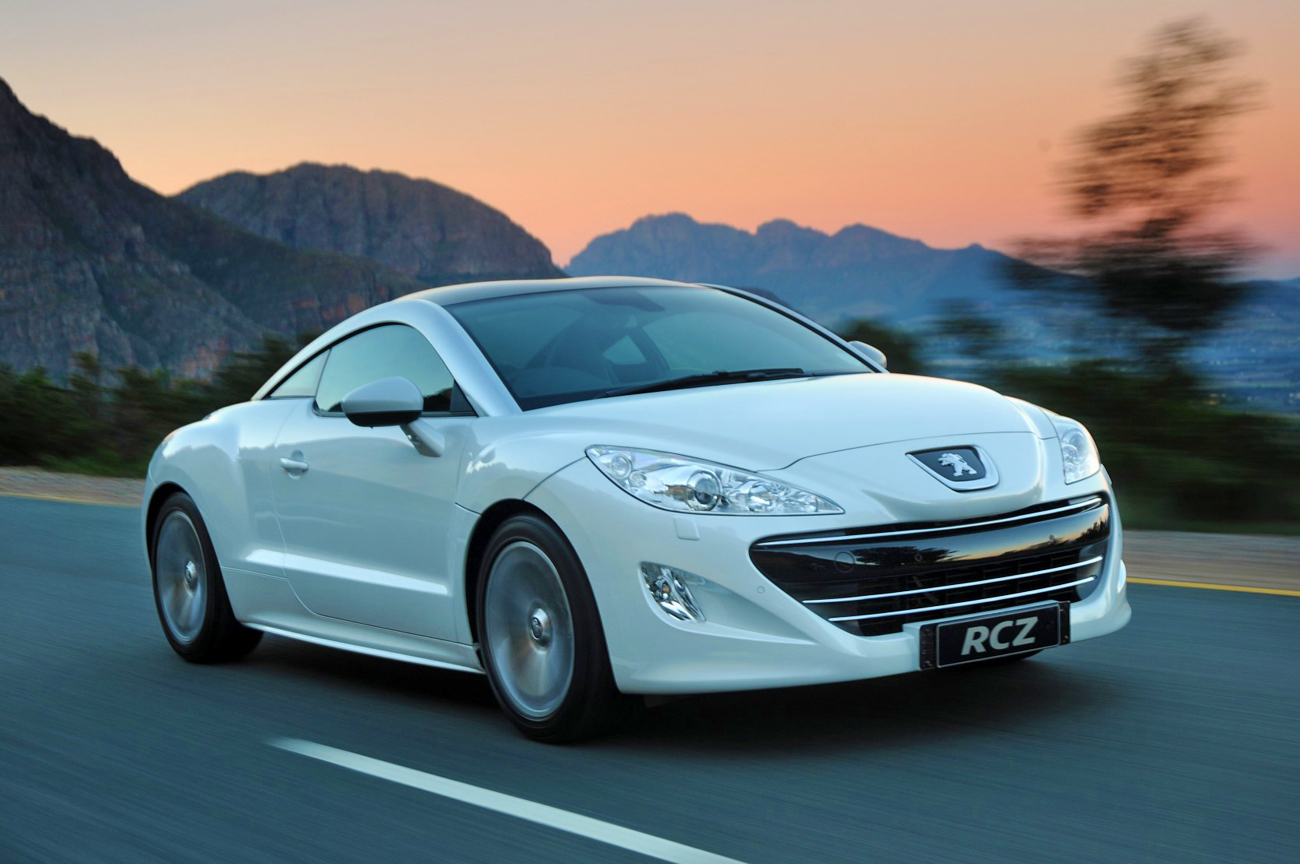 If you’re a sports car aficionado, Peugeot would be an unlikely brand to feature on your wish list. Not that we have anything specifically against the marque. Its GTi-badged hatchbacks apart, the Lion of Beaufort hasn’t really given performance enthusiasts much to smile about. But the arrival of the RCZ should change all that. And yes, there’s more to this coupé than just a pretty face.  By DEON SCHOEMAN.

If you’re a regular visitor to the The Daily Maverick’s weekly motoring column, you’ll know that we travelled to Spain’s Rioja region earlier this year to test drive the new Peugeot RCZ – a sporty and attractive 2+2 coupé with the kind of looks that suggest dynamic talent.

To be frank, we were somewhat concerned that the newcomer would have more show than go – but once on the snaking, treacherous roads criss-crossing the mountains and forests in the region, any such misgivings were quickly dispelled.

We came away impressed by a car that seemed to link a truly original and unmistakably Peugeot design to an involving, grin-inducing driving experience.

Almost exactly five months later, we’ve just had our second bite at the Peugeot RCZ apple – this time on South African roads. And while the Spanish experience was an impressive one, being able to pilot the RCZ on local soil has brought the coupé’s talents into sharper focus.

As much as styling is a personal and subjective issue, nobody will argue that this Peugeot is a head-turner. And if the accompanying images suggest some aesthetic similarities with Audi’s seminal TT Coupé, don’t be fooled: In reality, the RCZ looks very, very different.

The front appearance is pure Peugeot, with an exaggerated grille framed by tapered headlights and the now-obligatory daytime running lights. A low front bumper, short overhangs, flared wheel arches and large alloy wheels all point to the two-door’s sporty intentions. The profile shows off the clean arc of the roofline, emphasised by bright-trimmed arches that can be ordered in different hues. The side view also exudes a sense of poise and balance, and provides some visual references to Peugeot’s Le Mans prototype sports cars.

However, it’s the so-called double-bubble rear screen (also inspired by the Le Mans car) that will become the RCZ’s signature  feature. It adds individuality and flair to an already attractive, cleanly sculpted design, and teases the eye from every angle.

The Peugeot’s aesthetic appeal is coupled to a more pragmatically executed interior, where the emphasis is on comfort and ergonomic functionality. The dashboard is strongly reminiscent of current 308 models and features clear instrumentation and familiar switchgear.

The seats are bolstered for additional support, and trimmed in fine leather, while the rear bench will accommodate pygmies or toddlers only – or, I suppose a compact adult for short (very short) journeys. As Peugeot has already demonstrated with current models like the 308 hatch and the 3008 crossover, interior build quality is impressive, with classy trim and materials adding to the overall sense of wellbeing. The boot is another pleasant surprise, offering substantial loading space, which can be extended even further by folding the rear seats flat. The result is a certain element of practicality which is often lacking in the sports coupé genre.

Two RCZ models are being offered at launch, although Peugeot dealers will only receive their stock early in November. The baseline RCZ links a 1,6-litre high-pressure turbo with 115kW and 240Nm on tap to a six-speed automatic gearbox offering both full auto and sequential manual shift modes.

But don’t be fooled by those stats: even this junior RCZ offers brisk performance, with a 8,4-sec sprint time from zero to 100km/h and a 213km/h top speed.

By comparison, the flagship model gets a 147kW version of the same high-pressure turbocharged engine under the bonnet, with torque pegged at 275Nm.  Drive to the front wheels is via a six-speed manual gearbox. But straight-line performance isn’t really what the RCZ is about. A mix of twisty passes and flat-out country roads in the Western Cape demonstrated the sports coupé’s agility, neutral handling and overall entertaining road manners.

The 2+2-seater always feels chunky and planted, with nicely positive turn-in and loads of grip. There’s not much in the way of understeer, and a brief throttle lift in mid-corner will allow a tightening of the line without fuss or drama.

The turbo engine offers ample in-gear shove, and whether you’re attacking the corners, or cruising long-distance, life behind the RCZ’s wheel is always enjoyable. That extends to the creature comforts in the full house-equipped cabin, which  is not only solidly screwed together, but also luxuriously appointed.

Most of all, the RCZ isn’t just another lifestyle coupé. The 115kW version is already swift and responsive enough to be considered athletic, even though the auto box adds a patina of convenience that takes the edge off the sports car image.

The gearbox isn’t bad and manages to direct its six ratios with confidence, so that there’s no hunting between gears, while cog swaps are smooth and rapid enough. But the conventional torque converter-equipped design does blunt throttle response, even when shifting manually in sequential mode. And on that subject: Peugeot should have equipped the auto-gearbox RCZ with steering wheel-mounted shift paddles to tie in with it sporty image. Using the gear lever for sequential shifts isn’t nearly as convenient.

Even so, this “junior” RCZ  has the chassis dynamics to qualify for  true sports coupé status, even when pressing on hard . For real enthusiasts, however, the 147kW version adds the extra shove and impetus that chassis deserves.

It allows corners to be approached faster, with more muscle in reserve, and greater scope for throttle-steering. The larger 19-inch wheels add some grip, but we’re not convinced that the RCZ actually needs them for anything more than extra macho looks.

The steering is a revelation. Electric power assistance as a way of anaesthetising steering response and exaggerating steering input. But the RCZ suffers none of those vagaries: The steering loads up nicely, and under load, the action is meaty and succinct, without penalising precision.

Together with a taut suspension set-up and a stiff chassis, it allows a real rapport to develop between car and driver. Feedback is constant and unequivocal and while some might consider the ride a little unforgiving, it’s a further confirmation of the RCZ’s sporty intentions. Interestingly, a 120kW turbodiesel version will be included in the RCZ line-up from next year – a first for this segment in South Africa, where diesels are usually restricted to the motoring mainstream. Just how the public will react to a sporty 2+2 with diesel shove remains to be seen, but Peugeot is the acknowledged master of the diesel art.

The pricing of the two versions offered at launch is keen: at current levels, the 115kW version will come in at R358 000, while the 147kW flagship version is priced at R373 000 – for now. Those prices exclude CO? emissions tax, and will be reconsidered before sales start in November.

Those price tags suggest that the RCZ represents very good value. It has very few true rivals, with Volkswagen’s Scirocco perhaps the closest competitor. The German two-door lacks the RCZ’s visual presence and extensive list of creature comforts, but offers better rear accommodation and an established reputation for robust quality.

The Audi TT would appear to be another contender, but is priced well beyond the Peugeot’s positioning, while the German brand’s premium positioning also elevates it above the French marque’s status – at least for now.

Quite obviously, the RCZ is meant to be a halo car for Peugeot: a sports coupé with a mission to change perceptions. And in that it succeeds admirably. DM