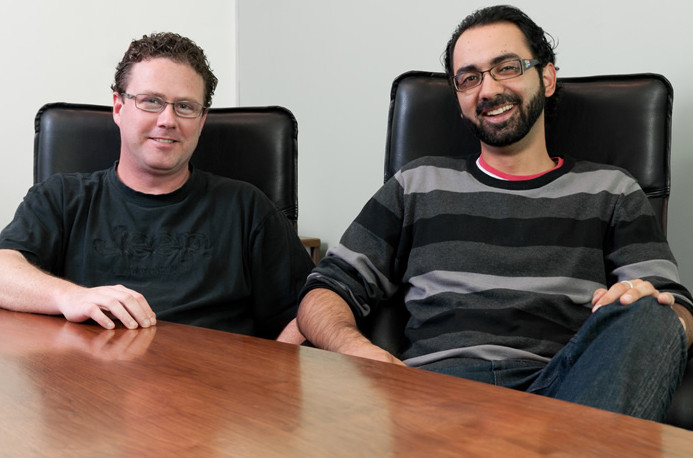 “The same thing we do every day, Nic – try to take over the mobile web.”

The difference between Motribe founders Vincent Maher and Nic Haralambous and the characters in Pinky and the Brain is that the tech entrepreneurs are both brainy. And there appears to be more considered thought behind Motribe than any of the crackpot schemes of the two cartoon mice.

Maher and Haralambous have worked together “on and off” for the last five years and, according to Maher, the idea for Motribe “started when we realised that people form communities on mobile about special interests more so than real-world friendships. The original idea was to create several niche communities, but as we developed the idea it became apparent that almost anyone would want to use a service like this to organise the multiplicity of social circles they live in.”

Motribe is a social networking product that allows clients to create their own personalised networks, including features such as blogging, photo-uploading and chatroom functionality. Okay, you say, but how does this differ from other offerings, such as Facebook? The answer is in a number of ways, among them the fact that it’s optimised for mobile. “We are not treating our mobile platform as a crippled version of the web. Our users deserve the best experience they can have,” says Maher.

Digital media expert Dave Duarte sees Motribe’s focus on the mobile web as its unique selling point. “Up until now everyone’s invested in developing mobile applications, and they don’t interact with the web, so it’s quite a closed ecosystem. [Motribe is] very progressive in that they’re dealing with the mobile web, and they open up a whole new ecosystem,” he says. “What enables Motribe over applications-based start-ups is that they don’t need to develop a different version for every single phone.”

This means that right now, without any extra tweaking or coding, Motribe is available globally. As Maher says: “Our platform works well on basic phones with Internet access as well as on high-end smartphones, so we are targeting a mixture of developed and developing markets including Brazil, Nigeria, North America, South-East Asia and Europe.”

Maher declined to name any of the paying clients that Motribe’s attracted so far, but claims they are there. “All the paid clients are still working on their content strategy so none is live yet,” he says. “We have some big ones, but that’s all I can say right now.”

Motribe’s model allows clients to sign up for free for six months, as long their social community remains at fewer than 100 users. After the time is up, or the community expands beyond the limit, the account must be upgraded to one of the payment plans, which cost from $9.95 a month to $49.95 a month, users that pay more having access to greater functionality. “The natural growth path is that users start with a free account, build up a small user-base and then upgrade,” says Maher.

“Nurture capitalists” 4Di Capital helped Maher and Haralambous take the idea from conception to the commercial stage. 4Di Capital associate Douglas Cherry says that after a few initial meetings, and conducting a due diligence exercise, 4Di Capital was impressed by Motribe’s credentials and business plan. “It showed a significant opportunity in the mobile space. We had strong opinion that they’re definitely filling a gap, so we invested in them,” he said. 4Di Capital is part of the Silicon Cape initiative, co-founded by its chief executive Justin Stanford. Silicon Cape was launched in 2009 with the aim of providing a fertile meeting ground for venture capitalists, young entrepreneurs and technical expertise.

“There’s quite a lot of entrepreneurial spirit and intellectual capital around the deeper tech environment, and we felt there was a gap and a very significant opportunity for us,” says Cherry. “We’re largely early stage; we won’t have any specific exit goals in mind. We take entrepreneurs with what we believe as being valuable talent and nurture them to something that has global reach, and is highly scalable.”

Motribe clearly fulfils these criteria, and Maher anticipates the company will break even within two years. “The business model is driven by a combination of mobile payments for Pro accounts, online subscriptions (Software as a Service) and mobile advertising,” he says. Duarte says that the click-through rate for mobile advertising is much higher than in the desktop environment, citing “banner fatigue” as a possible cause, which gives Motribe an immediate advantage. “It’s a virtually uncontested marketspace,” says Duarte.

One of the features of a Motribe Pro account, is that community owners themselves can make money from advertising shown on their sites. “Network owners can add their own accounts on Inmobi, Admob and Google to earn income,” says Maher. “By the time they need a Pro account it will most likely pay for itself, depending on how active their communities are.”

As illustrated by its different packages, Motribe aims to attract a range of users – from book clubs to big brands. Marketing and social media consultant Melissa Attree says that while none of her clients is using Motribe – yet – one of the service’s strengths is the ability for clients to bolt on additional functionality to their existing mobile presences. “You can pick and choose in terms of what you want,” she says. “There are customisable options at affordable rates.”

This customisable functionality is in some sense a practical manifestation of Motribe’s philosophy of focusing on niche communities. On the Internet, Ning.com has been the leader in catering for this market. Motribe aims to do the same on the mobile web. Attree feels that there’s a definite need for a niche social networking space on the mobile web. “Specific niche social networks mean that if there’s something you require from the group you belong to, the information is absolutely specific to what you want,” she says. “Facebook and Twitter are much more general.”

As an example of the value of such niche networks, Duarte cites communities that may spring up for only a specific period of time, for example, a group providing information for mothers-to-be, who want to be a part of it only for the period of their pregnancy. “Networks on Facebook are people we know, whereas mobile social networks are driven by the need to create new connections,” he says.

“Mobile users are starved for new interactions and a sense of community that goes beyond their real-life borders,” says Maher. “It is a way of exploring the world, meeting people and forging new and different relationships.” Motribe has provided a platform for mobile web users to engage with each other without being constrained by their choice of phone or the apps it supports.

But will it take off? Admittedly, predicting which tech start-ups will succeed or fail is a mug’s game. However, Motribe’s clearly got the fundamentals right: venture capital from a tech-focused investor; a product that shows a clear differentiation from its competitors; and the supportive environment of the Silicon Cape initiative. We have the feeling that Motribe’s going to be around for a while beyond its initial two-year make-or-break period. And by then, they’ll probably be a lot, lot bigger. DM