The horror scenario No. 23: scary supergenes that make...

The horror scenario No. 23: scary supergenes that make even scarier superbugs 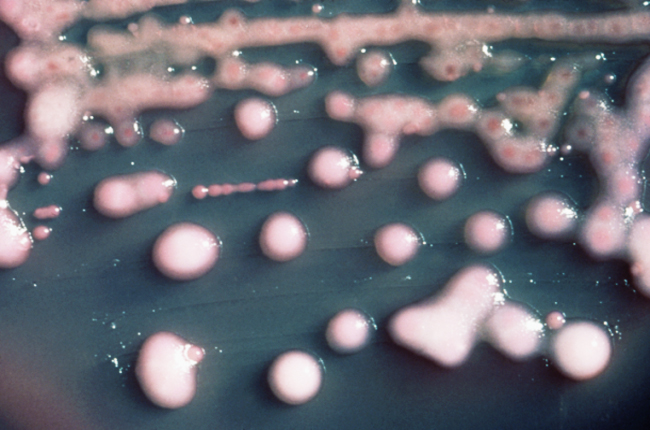 It could have come from any Hollywood disaster flick script. As if the spread of antibiotic-resistant bacteria wasn’t frightening enough, scientists are now tracking a gene which has the potential to morph otherwise harmless bugs into super-villains.

A generally harmless bacterium, that usually does little more than cause diarrhoea or urinary tract infections, has acquired a gene that makes it resistant to almost the entire array of antibiotics out there. There are millions of bacteria in each colony, and reproduction on such a large scale increases the chances of the bacteria evolving into more resistant strains. Add in factors like improper hygiene in clinics and hospitals and the fact that drug companies are not developing unprofitable new antibiotics, and the potential crisis grows in magnitude.

A team of scientists, headed by Timothy Walsh, a professor at the Department of Infection, Immunity and Biochemistry at Cardiff University, says the gene, called NDM-1 (New Delhi metallo-beta-lactamase), alters the genetic makeup of bacteria making them resistant to all previously effective antibiotics. The gene is reportedly prevalent in bacteria in patients from India, Pakistan and even the UK. It is seen primarily in fatal E.coli strains and on the DNA structures that are easily replicated and propagated to other bacteria.

While the phenomenon of drug-resistant pathogens is nothing new, improper and excessive use of successive generations of drugs has aggravated the problem and led to the emergence of so-called “superbugs” which can’t easily be killed. A lot of bacteria are, by now, resistant to the oldest antibiotic, penicillin.

Such antimicrobial resistance is a growing concern for the World Health Organisation because of the potential to affect treatments of basic diseases such as dysentery and respiratory infections. Though its outlook is optimistic, since countries have had a history of effectively battling such micro-organisms with increased resistance in the past, the WHO says NDM-1 needs further study and monitoring. The world body has urged caution be maintained.

This is even more so as the gene is now being spread globally. The first Japanese case of the new “supergene” bug was confirmed by the nation’s health ministry. The patient was a man in his fifties, who received medical attention in India and was admitted to hospital in Tochigi, north of Tokyo, on his return in April 2009. Though he was later discharged, Dokkyo Medical University Hospital preserved a sample of the bacterial strain, which was examined after the recent media attention to the superbug gene. A nationwide survey has now been launched to search for evidence of more such infections.

In the US, the Centres for Disease Control and Prevention have recently reported that patients from California, Massachusetts and Illinois have been found to be infected with different bacteria that had the NDM-1 gene. All three patients had recently visited India for medical tourism reasons and are now reported to be healthy and safe. Interestingly enough, three different types of bacteria were involved, and three completely different mechanisms incorporated the gene in the bacteria.
The gene has also been detected in small amounts in Canada, Australia, Sweden, Netherlands, UK and of course, India – a prime destination for medical tourism for procedures like cosmetic surgeries.

While reports around the world are claiming that the superbug gene’s roots can be traced to the Indian medical tourism industry, government officials are vehemently denying it and have objected to the nomenclature of the pathogen as well. The Indian government’s statement has pointed out that similar resistance threats have come from Israel, Greece and the US and said it was not right to blame and cite isolated examples. It also had issues with the funding for the study, since activities of a couple of authors of the study have come from pharmaceutical companies.

The lead Indian scientist in Walsh’s group, Karthikeyan Kumarasamy, from the University of Madras’ Department of Microbiology, doesn’t entirely agree with the conclusions of the report. But while the nomenclature and origin of the superbug gene is being debated, it does throw light on the important issue of hygiene in the hospitals and of developing ways to counter antibiotic-resistant pathogens.

The August issue of the renowned British medical journal, Lancet, reports NDM-1 could become a global public health concern needing to be tackled with a co-ordinated effort between states and requiring international surveillance.

The WHO has recommended governments narrow their focus on four distinct areas: promoting rational usage of antibiotics, prohibiting antibiotic sale without prescription, increasing infection prevention in hospitals and surveillance. We hope this doesn’t have the tagline – “Coming to a clinic near you”. DM