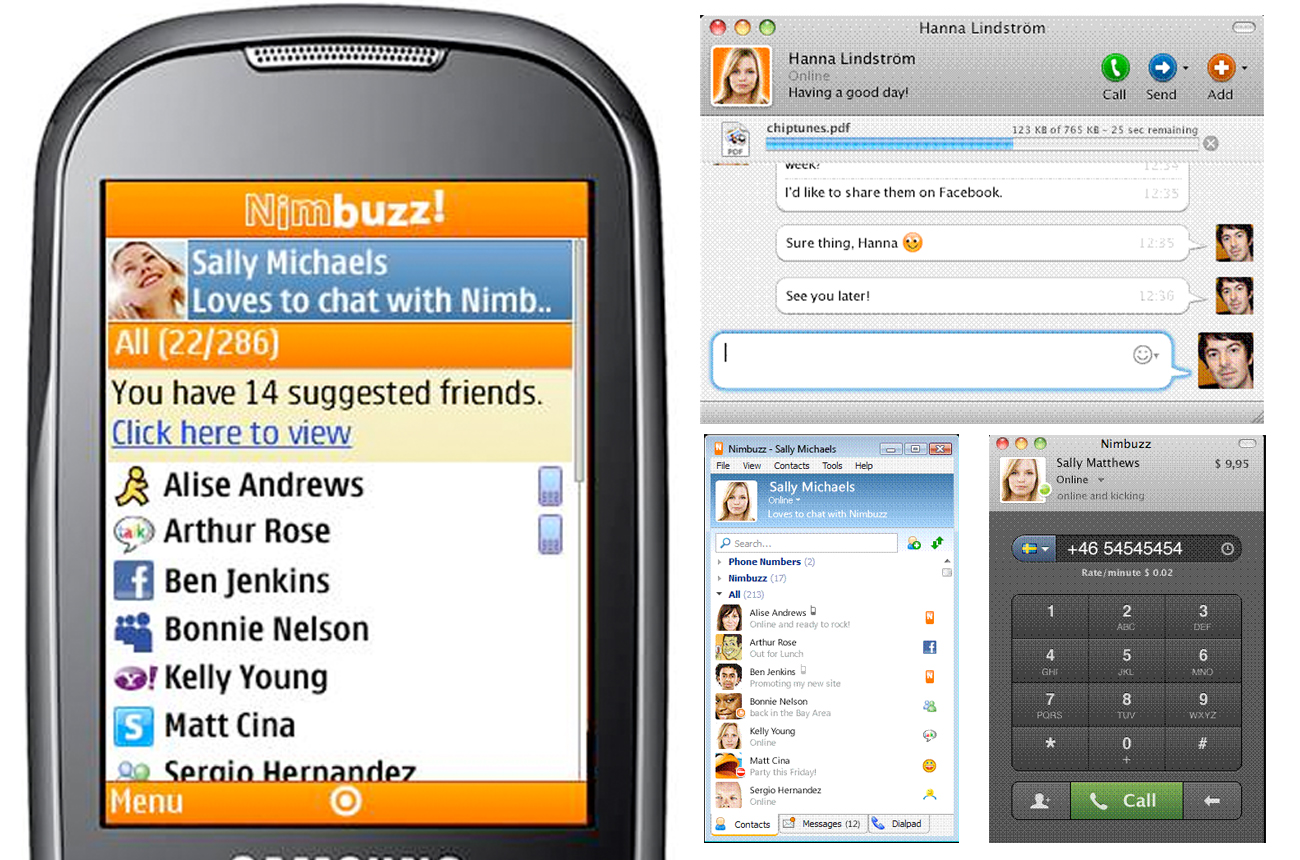 “Nimbuzz has seen consistent user growth and sign-ups for Africa and we are coming to South Africa to look for distribution partners to grow the business faster,” said Tobias Kemper, general manager of Nimbuzz. Partnering with network operators in developing markets has realised significant growth for Nimbuzz so it’s hoping to repeat this success in South Africa.

“We’ll be speaking to mobile network operators who can use Nimbuzz as a loyalty tool and a revenue driver to augment data sales. What we’re offering is an incremental subscription model for unlimited access to Nimbuzz, something that’s already been successfully rolled out with two major network operators in Indonesia,” he said.

Like MXit, in which Naspers is also invested, Nimbuzz was a small side-project that grew into a mobile communications giant. Developed as a free SMS text messaging application in the Netherlands by a Dutch duo, Nimbuzz aims to become the multi-purpose mobile application for everyday users and is signing on some 60,000 new users a day.

After realising Skype was well outside its investment budget, Naspers made a beeline for Nimbuzz. “We’ve been invested in Nimbuzz for quite some time. The co-founder of the company, Evert Jaap Lugt, is an impressive entrepreneur who started a number of other Internet businesses very successfully and sold them at a big profit. They have the right DNA in the company,” said Antonie Roux, CEO of Internet operations for MIH, the investment holding company wholly owned by Naspers.

Roux won’t disclose how much Naspers invested in Nimbuzz, and says it is too early to look at returns because the service only started monetising in April. “It’s an interesting sector and Nimbuzz will either be one of those investments that work incredibly well or not at all,” he said. What Nimbuzz has going for itself, said Roux, is astute leadership, strong market growth and an increasing base of good partnerships with mobile operators helping drive growth.

“There’s been a lot of change of ownership at Skype and rumours that they will be bought by Cisco. There’s not been that much product innovation on Skype and a number of CEOs until Josh Silverman’s appointment,” said Roux in explaining the difference between Skype and Nimbuzz business models.

Roux compares Nimbuzz to Naspers’ hugely successful investment in China called Tencent. “If you want to operate in this space you have to embrace the Tencent business model. The Tencent business model says you offer the basic service for free and when you have millions of users you start charging for premium versions and services. That in essence is what we are trying to do here.” Nimbuzz experienced a huge growth surge in Saudi Arabia after the government there threatened to outlaw BlackBerry services because of security concerns over the mobile phone maker’s encryption technologies. Nimbuzz registrations there increased from some 2,000 a day to a high of 35,000 a day as the Saudi government deliberated over the ban.

“BlackBerry encrypts everything that goes through its servers and there was a threat that BlackBerry Messenger was going to be shut down. People were looking for an alternative and flocked to our solution which was a free application in the BlackBerry App World and complied with Saudi Arabian government regulations,” said Kemper.

BlackBerry’s parent company Research In Motion has fallen foul of a number of governments because it encrypts messages that are routed through RIM’s servers in Canada. More recently the United Arab Emirates announced that it intended blocking BlackBerry services from October with Dubai’s police chief referring to the handset as a “spy tool”. Fears are that BlackBerry’s encrypted services will be used for espionage and terrorism.

According to Kemper, Nimbuzz user growth outside of the Middle East has been largely by localisation. “We use a lot of our own users as ‘evangelisers’ and do community outreach and language localisation. This is the first step to ensure the application is available in local languages. This makes it easier for people to recommend the product to their friends.” Nimbuzz develops its software in Java, Android, Symbian and other major platforms to ensure that the communications tool is available on a wide range of mobile devices as well as on PC and Mac.

“Once we’ve finalised a deal with mobile network operators, users will be able send an SMS with a specific code to the operator to unlock unlimited access to Nimbuzz by day, week or month. This way the operator can guarantee incremental data sales and users aren’t tied into long contracts. It’s very much an instant gratification, on-demand play,” said Kemper.

Naspers’ Roux said Nimbuzz had learned important lessons in other developing markets. “In India, Nimbuzz is really big and is one of the most-used applications on mobile phones in the country. As a matter of fact, the 11 mobile operators promote Nimbuzz as a preload on their phones. It is particularly successful there.

“I’d like to think that once Nimbuzz has cut the right deal locally, it will enjoy greater traction in this market. American companies have been spectacularly unsuccessful in ‘unAmericanising’ their products when it comes to the developing world. Nimbuzz is very strong when it comes to localising so they stand a good chance of success,” said Roux.

Available as a free download for mobiles and computers, Nimbuzz generates revenues from advertising, product placement, sponsorships and premium services. Through MIH, Naspers has a 49% economic share in Nimbuzz, but enjoys 51% voting rights. DM

Read more: “Nimbuzz Sees Huge Jump in Blackberry Users From Saudi Arabia” at the New York Times and “Apps and downs” in The Economist.