The Big Issue and online vigilantism – where to now? 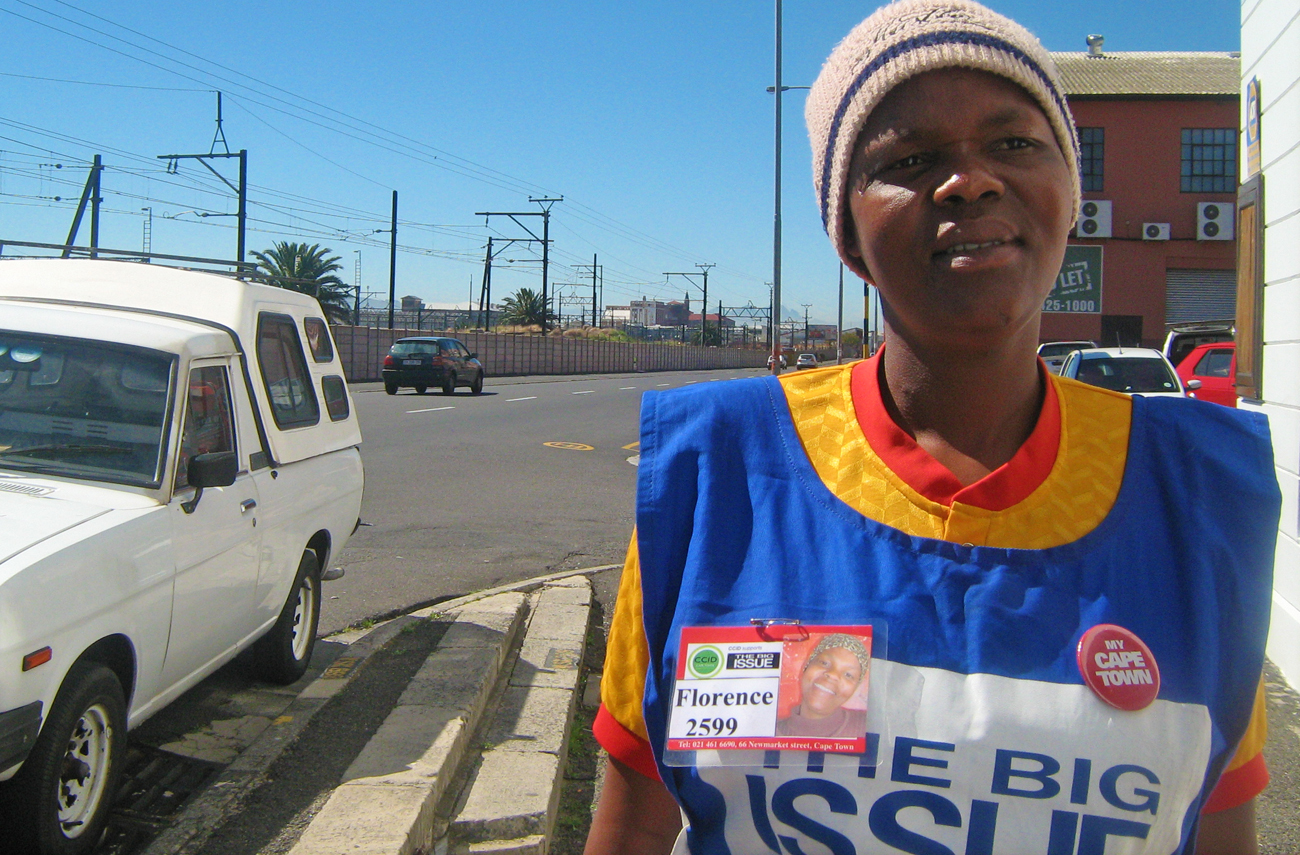 After a journalist witnessed Saturday’s incident of young men throwing water over a vendor of The Big Issue, she tweeted about it and the story soon went viral. The vendor just wants an apology – and for her tormentors to spend a day in her shoes. But will this be enough to satisfy Internet vigilantes? By THERESA MALLINSON.

Being a Big Issue vendor isn’t an easy job at the best of times. The Cape Town-based magazine is sold to motorists by homeless, unemployed and socially marginalised people who take a 50% cut of the R14 sales price. Making sales is difficult. Vendors are routinely met with windows being rolled up and potential customers refusing to make eye contact. But that goes with the territory. On Saturday afternoon, however, vendor Florence Godonwana didn’t just experience the customary refusal to engage with her, but was subjected to what can only be described as abuse, if not assault.

A group of young men sitting on the back of a bakkie beckoned Godonwana over, and doused her with two bottles of water, before erupting in laughter. Cape Argus news editor Natasha Joseph and a friend happened to witness the incident, and responded by taking a photo of the bakkie’s registration number and posting it on Twitter, as well as writing about it on Facebook.

Joseph says: “I was astonished by how fast it took off – it had been retweeted scores of times within an hour. My phone didn’t stop beeping at me through the night. I was bombarded with messages, requests for more information…” By Sunday, the incident had gone viral, with the hashtag #capeshame trending in Cape Town and Johannesburg, and it was picked up by e.tv news, which ran an interview with Godonwana.

A statement by The Big Issue released on the magazine’s website on Monday morning, said Godonwana, a mother of three, had decided to press crimen injuria charges against the people involved in the incident. But a second statement, released on Monday afternoon, displayed a change of heart. “I would like them to come personally to me and apologise, each one of them, and they must realise why they should never do anything like this to anyone else. Everyone has the right to dignity, and everyone has the right to work to try [to] put food on the table so our children will not go to bed hungry. They must respect that,” said Godonwana.

She also suggested that the men spend a day walking in her shoes, a sentiment with which Joseph concurs. “We all know how unwieldy and exhausting the justice system can be! She’s asking these guys to be human – to come and get to know her, and to do her job for a day. Brilliant! I hope they’re brave enough to do it.”

Interestingly enough, Cape Town Tourism conducted just such an exercise in August, when members of a team spent a morning selling The Big Issue. Wendy van der Byl, marketing services manager of CTT, is quoted on the Cape Town blog describing how the morning affected her. “I now have a greater respect and empathy for vendors trying to make an honest living…” she says. “It’s an experience I’d recommend to anyone who needs a touch of reality to put life back into perspective.” Sounds like just the sort of reality check Godonwana’s tormentors need.

As Joseph pointed out, the legal process is long and arduous, not to mention costly. Now that the threat of a criminal charge is no longer hanging over the alleged perpetrators, The Big Issue team is hoping they will come forward and agree to meet Godonwana. In the spirit of Godonwana’s request for an apology, The Big Issue statement reads: “The driver of the bakkie’s identity is known to The Big Issue, but is being kept confidential to allow the young men concerned the opportunity to come forward of their volition.”

But there’s a twist to the story. Lester Kiewiet, the reporter who interviewed Godonwana for e.tv, tweeted on Monday afternoon: “We may have the address for the #CapeShame bakkie. May go out to confirm it tonight [Monday night].” The television station subsequently tracked down the bakkie and will broadcast a follow-up story at noon on Tuesday.

However, Godonwana’s dignified and measured response to the situation, and her decision to drop charges, showed a specific concern for the callous water-tossers. “If this goes to court then they could get a record and that would be a big problem for them. It is better if they learn respect from this, and then their families can look at me and see that I gave them a chance.” Given that The Big Issue and Godonwana have made their feelings known, is there anything to be gained from e.tv’s hunting down the perpetrators, rather than allowing them the opportunity to come clean by themselves? It will be interesting to see what approach the television station takes in its follow-up interview, and if the reporting takes its cue from Godonwana’s attitude of forgiveness.

While the majority of people remain calm, some tweeters worked themselves into a righteous frenzy. A tweet reading: “That’s more like it people. Vengeance! throw a bucket of water over em on live TV! #capeshame” can, perhaps, be read as tongue-in-cheek. But a tweet by another user is more aggressive. “Who are those ppl in the white bakkie!? What are their morals, ethics & social skills? #CapeShame Make them lab specimens to find out.” It’s worth mentioning that not everyone agrees with this stance. Another person tweeted: “Florence, reverence to your humanity. We can all learn from you & hope those louts change their lives after this.”

In one respect, no price can be put on Godonwana’s dignity, but she has gracefully set one herself: an apology. Of course, we will have to wait and see whether her assailants do, in fact, say sorry voluntarily. But until we’ve given them a chance to do so, it further undermines Godonwana’s dignity to take a course of action – such as hunting down the people involved – that is directly contrary to her wishes. Big Issue editor Melany Bendix asked people to respect the way they’re dealing with the incident. “The Big Issue ethos – and Florence’s ethos – isn’t to have any vengeance and vigilantism,” she said.

As Joseph points out, social media is a useful tool in mobilising people, and beats the print media hands-down in this regard. “Twitter is so immediate; I literally posted five minutes after it happened. There was no hesitation, no delay… It also just has more reach, realistically. I’m a newspaper person through and through, but I’d be pig-headed and foolish to pretend that social media is not a vital tool for any good journalist.”

Unfortunately, one of the results of harnessing the power of social media in efforts of what has been termed “Internet vigilantism” is that, similar to acts of vigilantism in real life, it can add to the very problem it aims to rectify. Take the example of Mary Bale, the woman who recently gained notoriety in Britain after she dumped a cute little cat in a bin. She was outed as the culprit on the Internet, after the cat’s owners posted a video of the incident on YouTube, and created a Facebook group with the aim of finding the woman. The incident was cruel and indefensible, but did it really warrant the death threats Bale received? (Not to mention the expense to the British taxpayer involved in posting a police guard outside her house.)

Bendix emphasised that some good has resulted from the Godonwana incident. “There’s been a lot of good support for The Big Issue. We’d like people to realise the horrible times our vendors have and we’d like them to support The Big Issue and our vendors from now on,” she said.

Those venting their anger at the young men involved would do well to listen to her. Conducting a witch hunt for the culprits isn’t going to benefit anybody – their apologies will only mean something if they are given genuinely, rather than under duress. Buying a copy of The Big Issue, on the other hand, is a constructive way of making a difference. DM