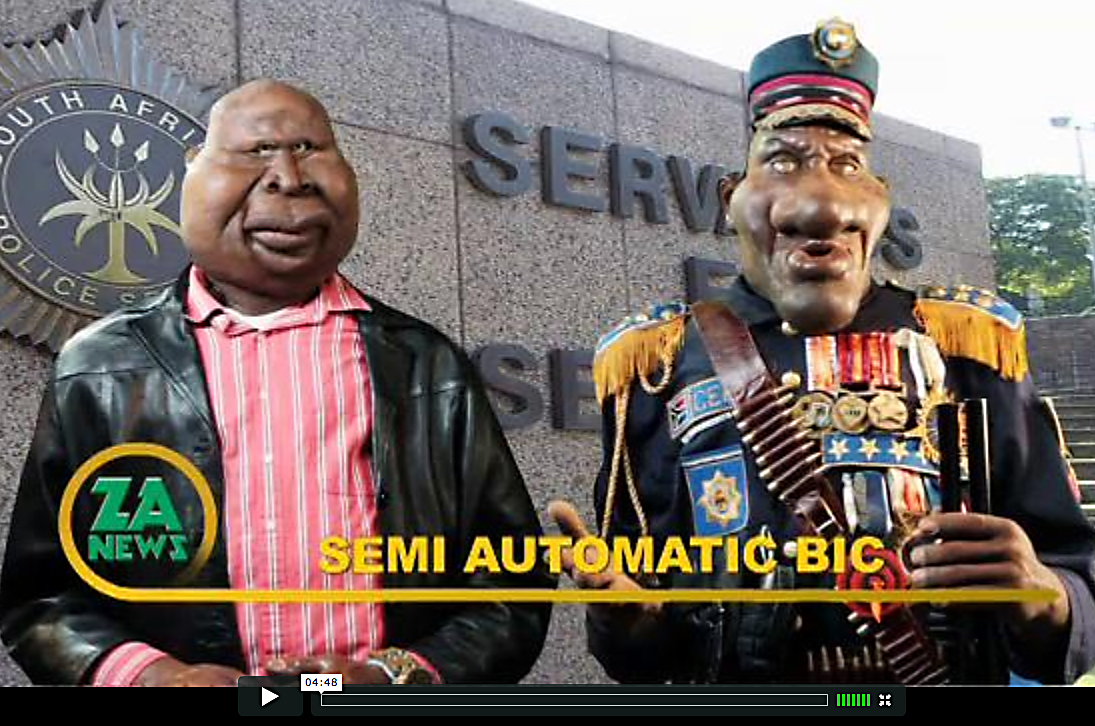 Satire fans were down in the dumps following the demise of popular South African website Hayibo. While still in mourning, last week’s return of ZA News for a third season will go some way to getting our country’s laugh-o-meter back where it should be. North of the Limpopo, Uncle Bob is not amused. By THERESA MALLINSON.

ZA News returned to the Interweb and TV screens, courtesy of Summit TV, on Tuesday, with a typically irreverent take on President Jacob Zuma’s family problems (the proliferation of his younger children and the proliferation of questionable business dealings by the older ones), the public service strike (featuring Cosatu’s Zwelinzima Vavi being denied an aspirin for his headache by a “comrade health worker”), Zimbabwean President Robert Mugabe denying his chicken problem and old favourite Springbok coach P Divvy assuring us we have nothing to worry about next year’s rugby World Cup (there won’t be anything left of New Zealand, owing to all the “tsunamis and earthquakes”). Well, he can dream…

ZA News, created and driven by cartoonist Jonathan Shapiro and director Thierry Cassuto, initially had a tough time finding a TV station willing to broadcast their brand of satirical puppetry. The SABC commissioned a pilot episode in 2007, but failed to commit to a full series after the board voted against it. But in October 2009, the Mail & Guardian stepped in and began broadcasting the first series online. The second series, which began in March 2010, was picked up by Avusa’s Summit TV and is screened every night before the 9 o’clock news, as well as being available on the Summit and ZA News websites.

In a new development, a weekly edition of the show (featuring highlights of the daily episodes as well as additional footage) will be broadcast on Cape Town TV on Sunday evenings. While viewership of this station is restricted to the greater Cape Town area, it is the first time ZA News will be available free-to-air on a terrestrial channel. And CTV boasts 1.3 million daily viewers, which is not to be sneezed at. It is too early to say what effect this latest deal will have on viewership, but the exposure on Summit TV has already brought the show a much bigger audience than the Internet. ZA News now reaches more than a million people weekly, says Cassuto.

Over the last two seasons, South Africans have relished seeing our politicians lampooned, with Zuma, DA leader Helen Zille and ANC Youth League leader Julius Malema having a particularly hard time of it. Then, of course, there are the priceless “outtakes”, featuring cosy fireside chats between former president Nelson Mandela and Archbishop Emeritus Desmond Tutu, a segment written by Cassuto himself.

The third season has already introduced some new characters, including Mugabe and the Zimbabwean army chief of staff, who is ever present by his side. A few generic characters have also joined the cast, which Cassuto says will help drive the show’s comedy. But the big news is that the next puppet to hit our television screens will be Greedy Moustache (okay, that’s not really his name, but you know who we mean).

Cassuto says there are also plans to introduce an international character. He wouldn’t say for sure who it was, only that it was a “close battle” between two or three contenders. Creating new characters isn’t a decision to be taken lightly. It takes about six weeks to make a new puppet, from the initial design stages to the final 3D product, but US President Barack Obama may just be influential enough to warrant the effort, so don’t be surprised if his ZA News incarnation pops up soon.

But never mind ZA News’ international flavour, since the second series ended in May, there’s been much going on in South African politics that just cries out for inclusion, and the writers have a surfeit of material at their disposal. In the second episode of the latest season, the ZA News team gives the proposed media tribunal the typically over-the-top treatment that’s the prerogative of satire, portraying the government as requiring a helping hand, or two, from journalists – literally. To soften the picture slightly, this scene wasn’t shown as a “real” news item within the fictional show, but had another layer of distancing added – being presented as a daydream of none other than our president. And distancing technique or not, that’s stinging criticism.

One of ZA News’ strengths is its topicality, and Cassuto says the process of creating an episode is “very, very quick, there’s hardly any time to think”. To keep up-to-date, the team starts its work on Sunday morning with a meeting where they read the newspapers and discuss stories and angles. By the end of Sunday, even if it’s as late as midnight, the scripts for Tuesday and Wednesday are in the bag, with shooting taking place on Monday, and the process for the second half of the week’s episodes then repeated. The team will be on this demanding schedule until the third season ends just in time for the Christmas break. If things go according to plan, they’ll be back for a fourth season in 2011.

The fact that ZA News has received two nominations in the South African blog awards (Best Blog about Politics and Best Blog Podcast/Video Blog) shows there is a growing appreciation of satire in our country. And ZA News is not above making a joke at its own expense – vote for their blog in the awards or Bheki Cele will take out Tim Modise.

Not everyone appreciates good satire though – especially when they’re on the receiving end. Zimbabwe immigration officials have not taken kindly to ZA News’s collaboration with Cape Town band Freshlyground in their latest music video, “Chicken to Change”. The video mixes images of a puppet of Mugabe reading a newspaper called “Bob’s Times” (with the headline “Glorious victory for Zanu-PF”), with the band (cheekily dressed in 1980s Zim fashion) performing the song. While the song acknowledges Mugabe’s role in the liberation struggle and his contribution during the first years of his presidency (yes, that would be way back in the early 1980s), the chorus “You are chicken to change”, is a not-so-subtle hint that it’s time for him to cross the road, and by the end of the video the Uncle Bob puppet has transmogrified into a chicken.

Watch ZA News and Freshlyground’s collaboration on the music video, Chicken to Change.

Zimbabwe’s Voice of the People Radio reported on Friday that the members of the band, which was due to play the Wild Goose Lodge in Harare on 3 October, had had their visas revoked. Freshlyground’s media co-ordinator, Sarah Barnett, told the Sunday Times that, “We were informed over the phone by an immigration officer that ‘if we wanted to see why the work permits had been revoked, we just needed to see Freshlyground’s latest music video’.”

Barnett expressed a somewhat naïve surprise that the work permits had been revoked, and commented: “If anything, we hoped the controversy would spark debates about the situation [in Zimbabwe], not about us.” But although it doesn’t look likely that the band will play in Zimbabwe any time soon, the video – and its consequences – has in fact made a pertinent point about the Mugabe regime. Ironically enough, by banning Freshlyground, the message of the song is simply reinforced.

Cassuto’s take on the video is that globally, all politicians need to have tough skins. “With great responsibilities come the responsibility to have a sense of humour,” he says.  Uncle Bob has clearly failed this requirement, but laughing at ourselves is a skill ZA News is helping South Africans to nurture and develop. Given that Hayibo is no more, ZA News has assumed an even more important place in our society. DM