David Dortort, the man who created Bonanza and made Wil...

David Dortort, the man who created Bonanza and made Wild West family-friendly, dies at 93 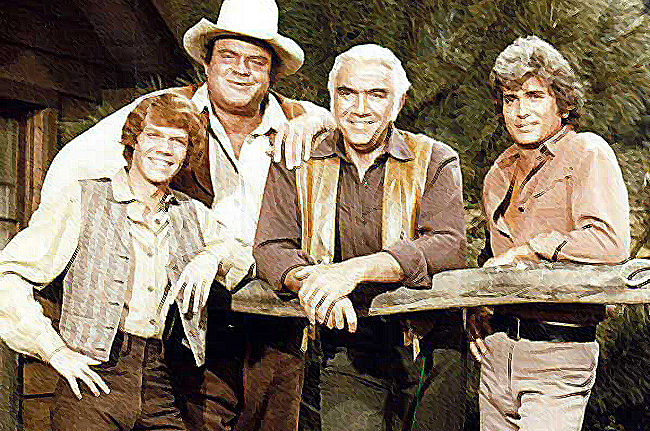 In 1959 the wild, wild West of black-and-white TV in America transformed to a full-colour kinder, gentler West of hardy pioneer families where all was not solved by a Colt 45. “Bonanza” changed television and the American mindset – long live the Cartwrights and that great galloping theme tune. By BROOKS SPECTOR.

There was a time, not so long ago, when everyone in America had finally purchased a television set for their living room. Back in this era before fibre-optic cable, satellite and the Internet, families would gather around the flickering screen with their TV dinners to watch the news/weather/sports, “I love Lucy”, “The Ed Sullivan Show”, “Gunsmoke” and “Leave it to Beaver”. There were only three channels and virtually everything was in black and white.

Veteran television writer and producer David Dortort, had the dream of creating a TV western that would eschew the weekly ritual of someone like Matt Dillon, “Gunsmoke’s” taciturn US  Marshall, who would be seriously challenged until he dispatched yet another black-hatted villain.

Dortort felt strongly that the true story of the American west was not what he called “the myth of the lone gunfighter”,  but the stories of families who broke the sod, planted crops, raised cattle and sheep and settled the open country to the west of the Missouri River. Native Americans were notably absent from this narrative. In 1958, Dortort conceived of a story line of a widower patriarch with a loving family whose crises would not be solved with a Colt 45 and a Springfield rifle.

He set the story on a ranch in Nevada, just after the discovery of the enormous precious metal deposits of the Comstock Lode outside Virginia City, and just as the Civil War was about to happen. A particularly poignant episode showed the war’s efforts on the family as one son was pulled to the North and another to the South by virtue of where they had been born. Years after the show was made, Dortort told an interviewer, “The gunfighter played a small, inconsequential role in the story of the West. The true history of the West is about family, pioneers.”

Watch: The theme song from Bonanza

“Bonanza” became the first regularly broadcast colour programme and was an enormous boon to sales of colour television sets. Making “Bonanza” in colour quickly distinguished it from all of its competitor horse operas like “Gunsmoke” and “Laramie”. NBC cast the show with a group of veteran, but not well-known actors – creating a whole range of multi-generational plot possibilities.

Lorne Greene became Ben Cartwright, the family patriarch (named after Dortort’s father) and his sons were played by Pernell Roberts, Dan Blocker and Michael Landon. All of them became wealthy – and Landon went on to a career in film as an actor and director. In a noteworthy casting for its period, Victor Sen Yung was Hop Sing, the family’s Chinese cook. The Cartwright family lived on their huge province-sized ranch, “The Ponderosa” and the show’s theme music is still virtually impossible to drive from one’s brain after hearing it.

“Bonanza” hit the small screen for the first broadcast at 7:30pm on Saturday 12 September 1959, facing off against the enormously popular “Perry Mason” on CBS. In 1961, it was shifted to 9pm on Sundays to attempt to capture even bigger audiences and it became one of those full-scale television legends. It ran for 14 years, and from 1964 to 1967,was the most popular show on American television. Somewhere, on some classic TV cable channel, people are probably still watching episodes.

Unusual for its time, the show featured story lines that spoke to issues like racial prejudice and religious intolerance. At its heart, however, even through eventual cast changes, the show was grounded on the Cartwrights’ strong family ties. Dortort used to say that whenever someone asked him what the real the message of his show was he would respond: “Love is the message.”

Dortort was born in Brooklyn to immigrant Jewish parents and grew up in a neighbourhood noted for  gangsters from the early crime families of “Murder Inc” – information he drew upon for two novels before he hit the mother lode with “Bonanza”. Dortort’s father had apparently emigrated to avoid entering rabbinical studies and he changed his family name to Katz and became a successful insurance broker. Years later, David Dortort would return to the family’s earlier name. While Dortort attended City College (a tuition-free university in New York City that was the university of many immigrants and their children), he was in writing seminars with some major cultural figures like critic Alfred Kazin.

Dortort’s start in the entertainment business came during World War II when he helped book talent to entertain wounded servicemen at a military hospital. Before “Bonanza”, Dortort had worked on popular films like “A Cry in the Night” as well as more literary works like a film version of Walter van Tilburg Clark’s novel, “The Ox-Bow Incident”.

Dortort’s impact on American culture parallels the work of immigrants and their children – filmmakers such as Michael Curtiz (“Casablanca”) and composers like George Gershwin and Aaron Copland who created a  texture of Americanness and what it means – and meant – to be an American. DM

For more, read The New York Times, Wikipedia, and IMBD.