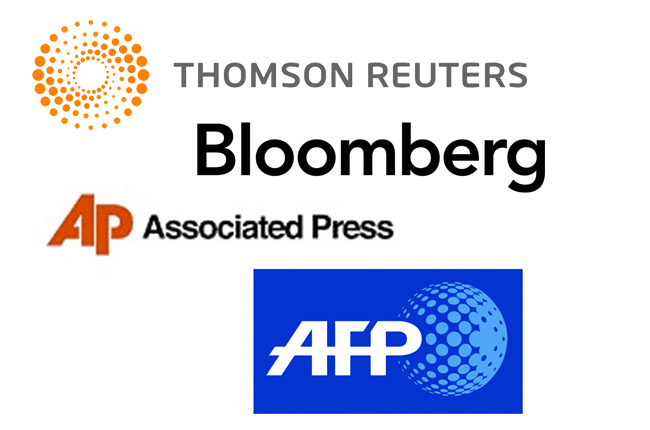 Four of the world’s largest news agencies have added their voices to the mounting tsunami of opposition against the proposed media appeals tribunal and Protection of Information Bill. Agence France Presse, The Associated Press, Bloomberg and Reuters have written to President Jacob Zuma, expressing their concerns. By SIPHO HLONGWANE.

“Agence France Presse, The Associated Press, Bloomberg and Reuters welcome your call for debate on media and media freedoms in South Africa,” their letter reads. “As international news agencies operating in South Africa, we would like to raise concerns that a proposal for a media tribunal and the Protection of Information Bill could restrict our work and the work of other journalists.”

Although couched in the language of diplomacy, the message is very clear. The international media community will not stand quietly by as the ruling party government seeks to quash the freedoms of media and expression by restricting the free-flow of information and granting the State punitive oversight on media affairs.

“We fear the proposed law of protecting could restrict the free flow of information, even though it stipulates it is not intended to allow officials to conceal information simply because its publication might be embarrassing. The bill would vest power to classify information to a wide range of officials, and extends statutory protection of information of ‘national interest’ without clearly defining how far that could extend. Penalties of up to 25 years in prison are envisioned. We fear this could conflict with South Africa’s Constitutional commitment to freedom of the press and other media. With regard to the call for a media appeals tribunal, we believe it would undermine the media’s independence if the tribunal were to answer to Parliament or any other arm of the government. While many aspects of how the tribunal would work have not been determined, we are concerned that it might not be in line with the freedom of expression enshrined in the Constitution or the commitment to democracy that South Africa has shown since 1994.”

In June and July, the international community gave South Africa glowing coverage for hosting a successful Soccer World Cup. South Africa was able to prove its critics wrong, and a positive image of the country went out to the rest of the world, not least because of stories published by agencies like AFP, AP, Bloomberg and Reuters.

However, the positive image and international goodwill may soon vanish if government continues putting measures in place to stifle Constitutionally guaranteed freedoms. In a little more than eight weeks now, strikes and media freedom controversy have  almost completely dismantled the gains made by hosting the World Cup. And by being re-published by thousands of publications all over the world, AFP, AP, Bloomberg and Reuters wield huge influential in international circles. The damage done to South Africa’s image would be all but incalculable.

In a gentle yet unequivocal manner, the news agencies have reminded Zuma that the freedom of expression is the foundation of every free society. The letter also reminds him of how they stood by his party, the ANC, during the struggle era.

“The media in South Africa and foreign reporters working in the country told the world about the horrors of apartheid, despite intimidation, attempts at censorship and attacks by the white-led government. In lodging our concerns more than a decade and a half after apartheid ended, we add our voices to those defending press freedom and freedom of expression in South Africa and worldwide.”

Zuma and his supporters in the ruling party would ignore their warnings at South Africa’s peril. DM