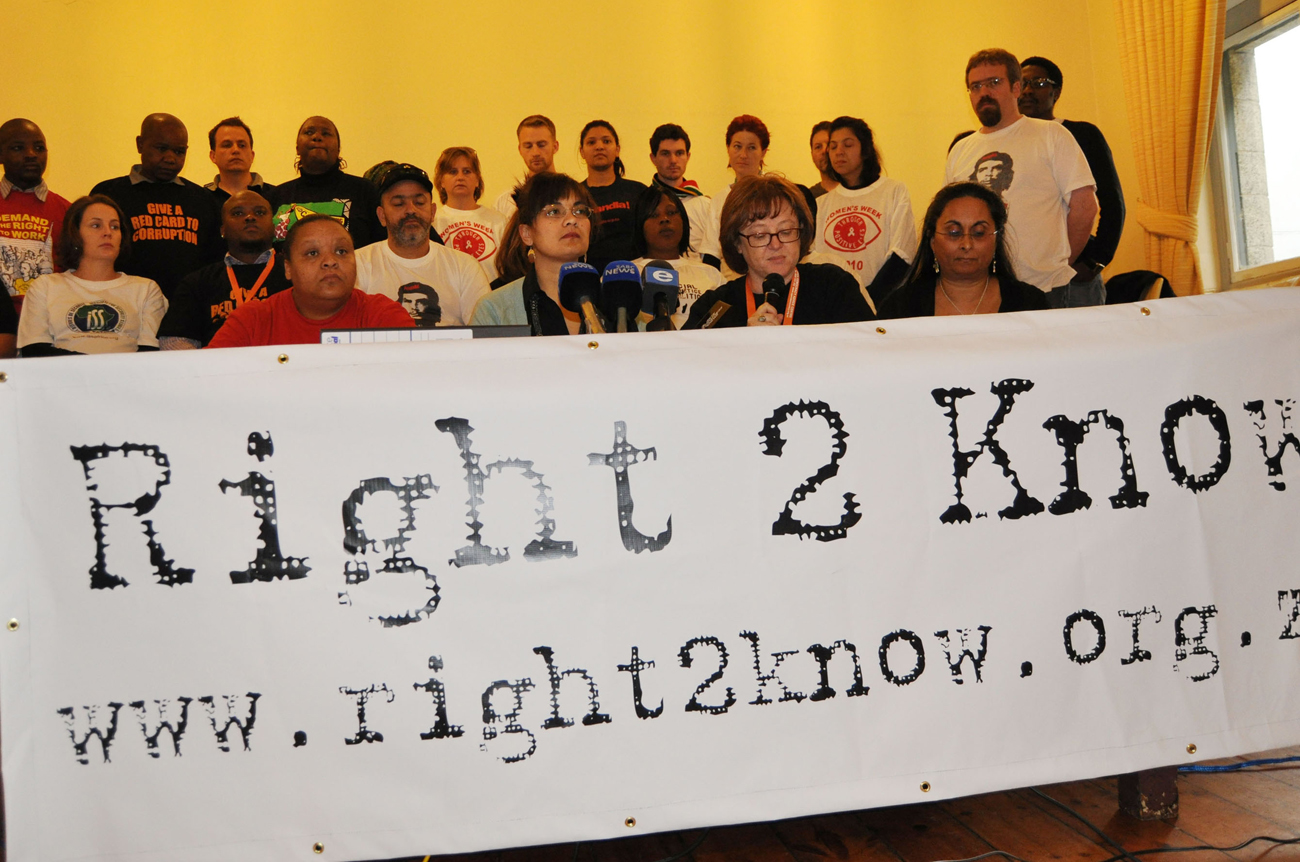 As the ANC indicated it may be willing to listen to representations on the Protection of Information Bill as far as such are deemed “practicable and reasonable”, civic society and the media are organising to defend the public’s increasingly precarious rights to basic and fundamental freedoms. By MANDY DE WAAL.

Wednesday 19 October 1977 was a black day in the history of South Africa. On that morning, in a massive crackdown against the media and black consciousness movements, justice minister Jimmy Kruger ordered the special branch to go into the homes of critics of the apartheid government and arrest them. Kruger banned The World and Weekend World alleging the newspapers were “publishing inflammatory material that threatened the nation’s security”.

Percy Qoboza, joint editor of the newspapers, was arrested as were a number of journalists in one of the biggest anti-media crackdowns in the country. Close on 20 organisations were banned including the Union of Black Journalists, Medupe Writers’ Association, Black People’s Convention, South African Students Organisation, South African Students’ Movement and Black Women’s Federation.

Since then “Black Wednesday” has been commemorated by civic organisations and the media, but in post-apartheid it was a celebration of the freedoms enshrined in the Bill of Rights, part of the Constitution adopted by a democratic South Africa.

This year “Black Wednesday” will be marked with a massive push by NGOs, civic groups, media groups and journalists to try to halt the Protection of Information Bill. The movement brings together scores of organisations and high-profile South Africans who are once again having to fight for basic human rights threatened by the proposed “secrecy bill”.

“The right to know means access to information and being able to speak freely, which are such basic constitutional values and rights,” said isaid Stefaans Brümmer, a managing partner of amaBhungane, the Mail & Guardian’s centre for investigative journalism. amaBhungane is a founder member of the Right2Know Campaign that sees some 200 civic organisations united by the common cause to stop the secrecy bill and to fight for South Africans’ right to know.

Brümmer said the movement had its genesis in July’s public hearings on the information bill in Parliament. “We all felt badly received and unheard. It wasn’t a good experience. It was pretty clear that the committee was not in a receptive mood. Many of the organisations realised the issue had to be escalated.”

The media and civic organisations banded together and drew up a petition called “Let the Truth Be Told! Stop the Secrecy Bill” which states that the “gains of South Africans’ struggle for freedom are threatened by the Protection of Information Bill” and that the bill “extends the veil of secrecy in a manner reminiscent of that same apartheid past”. The statement petitions that the secrecy bill be scrapped because it threatens peoples’ rights to access information and undermines freedom of expression. The proposed bill has been decried in its current form by none other than former intelligence minister Ronnie Kasrils.

“The first thing people can do is to sign the statement. Secondly, they can learn more about the bill and educate others,” said Brümmer. “We believe very strongly that this legislation will affect all people in their right to know what is going on in their society. It is good for people to learn more about how this would affect them and to educate others about how this would affect society so it doesn’t stay a small academic debate.”

Brümmer said organisations such as the Open Democracy Advice Centre were actively educating citizens and offering talks to groups and organisations who wanted to know more about the bill and how it would affect South Africa.

Speaking about civic protest action during October, Brümmer said it was likely Parliament would be petitioned. “One could well imagine a march on Parliament. It is important to involve parliamentarians as a focus of what we are doing because that is where the bill is being processed. Those people need to hear the concerns of civil society.”

Following the launch of the Right2Know Campaign Sapa reported that government spokesperson Themba Maseko said government was considering representations made on the secrecy bill. Maseko added that the minister of state security, Siyabonga Cwele, was focussing on vague or broad areas contained in the bill.

“Our attitude is that it sounds like Cwele has spoken about definitions in the bill being too wide,” said Brümmer. “One of the main concerns is that just about anything that can described as pertaining to the national interest can be classified as secret, so that is the one well-known criticism as it stands. The minister seems to be responding to that by saying that he is revisiting the definitions of the bill. That is not enough by any stretch of the imagination. Yes, it is one important problem, but this bill is shot through with problems and it is only a fundamental revision of the bill that will come close to meeting the expectations of civil society and meeting Constitutional requirements,” he said. DM

Find out more about the secrecy bill and sign the online petition at Right2Know.