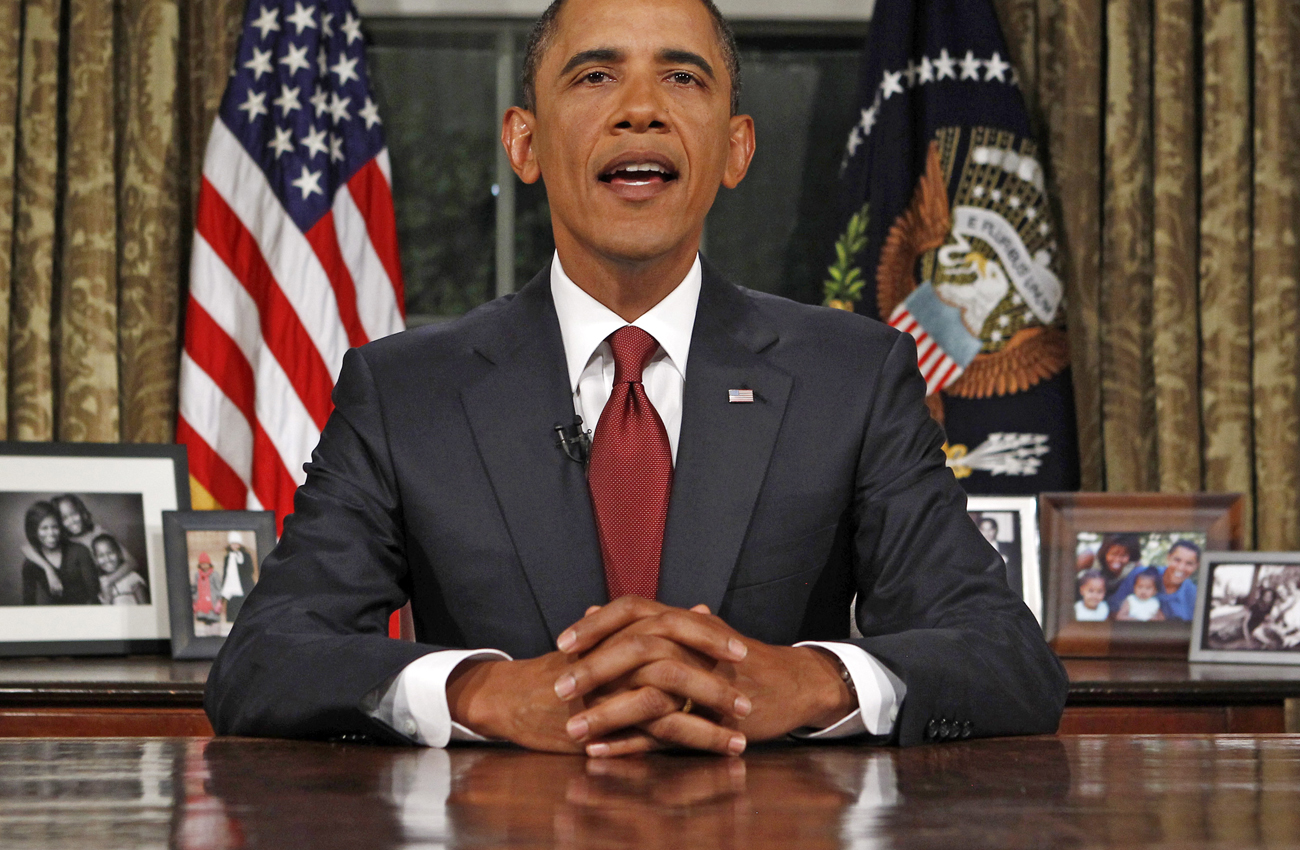 Using the Oval Office for only the second time in his presidency for a major live televised speech, Barack Obama on Tuesday told Americans, Iraqis and everybody else that US combat duties in Iraq were done and dusted. By BROOKS SPECTOR.

US troop levels in that battered nation had dropped to 50,000 from a high of 170,000 at the height of the troop surge. The remaining troops are now supposed to provide logistical backup and training rather than combat activities.

This controversial American military presence began in March 2003 when then-president George W Bush ordered an attack on Saddam Hussein’s Iraq on the grounds that country was secretly building those nuclear, chemical or biological “weapons of mass destruction” and was a threat to the stability of the region – and beyond. Ultimately, no such weapons were ever found.

Obama’s speech was in sombre, stark and dramatic contrast to Bush’s exuberant “victory lap” rhetoric on the deck of the USS Abraham Lincoln, shortly after the initial invasion. That was that arrogant, never-to-be-forgotten event that featured the large banner with the slogan, “Mission Accomplished,” hung from the ship’s superstructure.

Bush’s boast, of course, was outrageously premature. While Saddam Hussein’s rule was broken and he was eventually executed, the war has subsequently cost America perhaps a trillion dollars, the lives of some 4,400 US servicemen and women and led to the deaths of many tens of thousands of Iraqis. The deaths came both from initial military action and then the internecine fighting between religious sects and political factions over the next seven years. That continues, albeit at a much reduced level. Photo: President George W. Bush meets with crew members on the deck of the aircraft carrier USS Abraham Lincoln, after landing there aboard an S-3B Viking, as the carrier steamed toward San Diego, California, May 1, 2003. From the deck of the carrier, Bush addressed the nation to say that all major combat in Iraq has ended. REUTERS/Kevin Lamarque

In his speech, Obama declined to claim victory. Instead he said, “We have sent our young men and women to make enormous sacrifices in Iraq, and spent vast resources abroad at a time of tight budgets at home.” He added, “Through this remarkable chapter in the history of the US and Iraq, we have met our responsibility. Now, it’s time to turn the page.”

Obama then set out his case that the nation’s most urgent priority is to fix its wounded economy. He said that America “has paid a huge price” to give Iraqis a chance to shape their country’s future, but, in recognition of the domestic troubles weighing down his administration, Obama executed a pivot in what was ostensibly a major “war address” to deal with the dire state of the economy. Obama argued that the Iraq war had drained the country of funds crucial to its own prosperity and called for a domestic economic commitment to rival the Iraqi military campaign.

Obama’s Oval Office address was the culmination of a day that had earlier included a visit to Fort Bliss in El Paso, Texas, to give a public symbolic salute to veterans of the conflict. He also dispatched vice president Joe Biden to preside over the formal handover of combat authority to Iraqi forces in Baghdad on Wednesday, together with defence secretary Robert Gates and Admiral Mike Mullen, chairman of the joint chiefs of staff. The US will still station up to 50,000 troops in Iraq and the last will only depart at the end of 2011.

But even as Obama is attempting to shut the door on Bush’s Iraq adventure, his administration has embraced what he had once called the “right war” in Afghanistan with an ongoing, sharp escalation of military activity and US forces in that country to forestall a worsening military situation. As Obama explained in his speech, winding down the war in Iraq now permits the US “to apply the resources necessary to go on offense” in Afghanistan.

Despite this new chapter for Iraq, analysts reminded everyone that the violence there has clearly not ended. There will continue to be American non-combat deaths and the country continues to be burdened with sectarian violence and political instability. While Iraqis have gained freedom of political expression and broad access to open communication, they continue to struggle with routine shortages of electricity and water, besides the dangers of being injured or killed by a truck bomb or sectarian shooting incident.

Several challenges will continue to make for some hard choices by the Obama administration in the future. First, of course, is the fact that Iraq remains locked in its inconclusive, unsettled, dangerous political space. Five months after its national election, Iraq remains in a political stalemate without a stable government. New York Times columnist Tom Friedman has argued that Iraq was – and is – the heart of the Arab political and social universe and that what happens there, positive or negative, has consequences for the Middle East as a whole. As a result, Iraq’s circumstances mean the region remains caught in flux between those who would pull it towards an ideologically driven, sectarian, conflict-ridden place and those who want to open up the region to more democratic circumstances.

The second conundrum for Obama is how little he can actually claim to have achieved in Iraq, other than successfully backing away from Bush’s fateful commitment. Doing this was a key element of Obama’s 2008 election strategy, but Iraq’s future remains occluded at best – things can always get a lot worse there, really fast. And it can even be argued that this withdrawal simply makes concrete the more abstract agreement the Bush administration had already made with the Iraqi government for a gradual draw-down of US troops.

Third, of course, is the major shift in America’s domestic circumstances since Obama first announced that a key part of his administration’s goals, if he were elected president, would be to bring the American intervention in Iraq to an end. But, that was then, and this is now. While he won the election, at least in part, from a national rejection of the Iraq intervention, domestic economic issues are now at the heart of American politics. Polls, voting models and projections all indicate Obama’s Democrats are about to take a drubbing over the country’s continuing economic doldrums. Obama has to keep moving his administration’s attention away from Iraq and back to Main Street.

Finally, of course, he still has the Afghan war to deal with and the troop surge there that has been part of it, as well as the faltering political situation. After nearly two years in office, Afghanistan has now become Obama’s war.

Eight years earlier, in a frequently quoted speech, Obama had warned that a still-to-be-launched Iraq war could produce “a US occupation of undetermined length, at undetermined cost, with undetermined consequences”. If the fates are only slightly unkind to him, this criticism may still end up applying to him and to Afghanistan – even though he’s on record as saying the expanded US commitment there will also have to draw to an end. As he noted on Tuesday evening, “as was the case in Iraq, we cannot do for Afghans what they must ultimately do for themselves”, and restated his pledge that by July 2011 the US would begin transferring responsibility for security to Afghans, but at a pace to be determined by actual ground conditions. Still, Obama underscored this by saying, “make no mistake: This transition will begin, because open-ended war serves neither our interests nor the Afghan people’s.”

On the plus side of the ledger, however, as the current issue of The Economist points out, this ongoing detachment from the Iraqi tar baby has, at least in theory, opened up space, time, resources and energy for the Obama administration to deal more effectively with the two gravest issues in the region for American national security.

The Obama administration is now pushing hard to get Israel/Palestine negotiations under way with the ultimate goal of a final settlement to a seemingly intractable dispute that has run for more than 60 years, created hundreds of thousands of refugees, led to four wars and brought about numerous smaller military actions and conflicts that have only exacerbated Islamic fundamentalism in the region. The other key issue, of course, is Iran’s presumed nuclear ambitions that, if successful, could fatally unhinge the entire region.

Inevitably, perhaps, Republican Party leaders like House of Representatives minority leader John Boehner put down a marker for the upcoming midterm election campaign and the likely strategy of blaming Obama if Iraq’s military and political circumstances go sour after this troop withdrawal. “Over the past several months, we’ve often heard about ending the war in Iraq, but not much about winning the war in Iraq,” Boehner said, digging just a bit deeper when he added: “Some leaders who opposed, criticised and fought tooth-and-nail to stop the surge strategy now proudly claim credit for the results.” This, of course, sets the stage for that old “who lost country X?” – a charge and tactic that has been a standard of Republican foreign policy discourse since the communists gained control of China. Some things really do never change. DM