Maker Faire Africa: Ingenuity for all to see 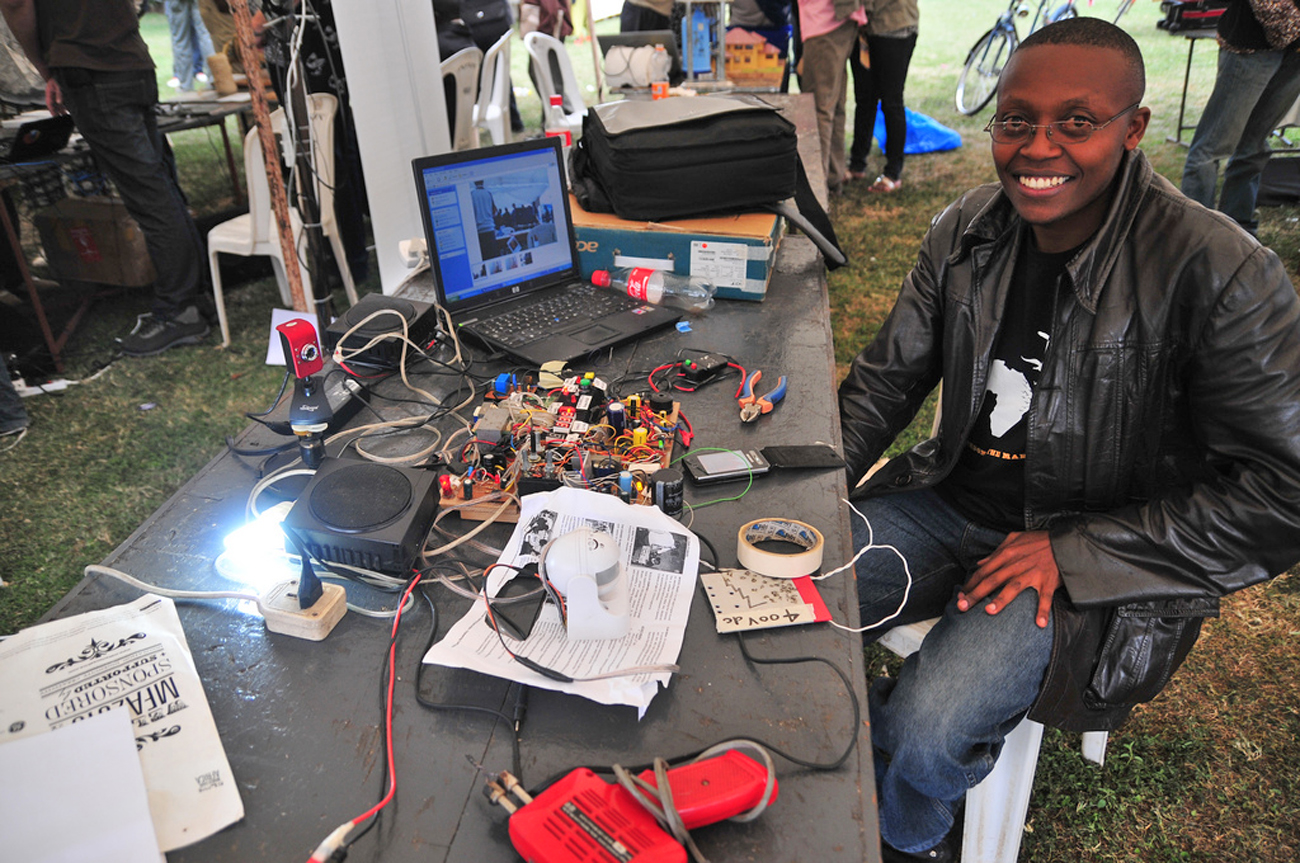 At this year’s Maker Faire Africa inventors from throughout the continent showed the world the vast talent that exists in Africa’s informal sectors. By MANDY DE WAAL.

Go to a Maker Faire in New York, Detroit or Dublin and you’ll be dazzled by hobbyists who had the time and inclination to make a shark mobile, kinetic squid sculpture or a solar-powered chariot pulled by an Arnold Schwarzenegger robot. Back home in Africa things are done a little differently.

“In the West, Maker Faires are mainly for creative types who tinker around in their spare time. But what we find in Africa is that it is much more about practical innovation. It’s about ingenuity driven by necessity. It’s all about creating something that people can try to make a living off of,” says Ushahidi’s Erik Hersman, one of the organisers of Maker Faire Africa held recently in Nairobi, Kenya.

“A good example is the corn planter that was showcased at last year’s Maker Fair Africa in Ghana. This gadget looks like a pole that is used when you walk through the fields. You push it into the ground periodically and it has a mechanism that works like a pill dispenser and plants your corn. Instead of having to lean over and push your thumb into the ground and plant corn that way, you can do it quicker and much more easily using this invention,” says Hersman, who adds the gadget has good potential for wide-scale use. Maker Faire Africa is in its second year and is organised by volunteers that include Hersman together with TED Africa producer Emeka Okafor, Mark Grimes from Ned.com, Henry Barnor of GhanaThink and social designer Emer Beamer. The idea behind the event is to create a platform that showcases the ingenuity in the informal sector or what is called Africa’s second economy. There’s a great phrase to describe this in Kenya where this sector is called the “jua kali”. A Swahili term for “hot sun”, this phrase refers to those people who sit in the sun on the side of the road making goods for sale.

“There is a huge need for more local manufacturing in Africa. If you take Kenya as an example, the economy is beginning to improve, and a lot of this is driven by technology and big business such mobile operators, ISPs and technology companies. But underpinning almost every single African economy is this ‘jua kali’ sector, the informal manufacturing base that makes it work. There’s definitely more need for platforms that showcase the innovation that happens in this sector,” says Hersman.

Most of the people who find work in Kenya do so in the “jua kali”, which is where a huge amount of trade takes place. “What needs to be done is to see how we can support this sector. How policies can be established to make it much easier for people to go from being micro-entrepreneurs to becoming medium-sized businesses,” Hersman says.

At Maker Faire Africa workshops are run alongside the event to teach inventors the basics of business and marketing. Media, businesses and investors who attend the event also offer  opportunities.

“Maker Faire Africa gets loads of media attention and was covered this year by the likes of Popular Mechanics, Fast Company and the BBC. What’s more important to us though is the local media and business attention it gets. This focuses on the people who are fabricating and making things locally and because of this coverage the makers find business partners, investors and sell more goods. This event is all about what these inventors get out of Maker Faire,” says Hersman.

More than 200 “makers” and some 85 projects were showcased at this year’s event with innovations that extended from creative reuse of waste material through to new manufacturing methods for producing sisal rope. “A highlight was the winner of an award sponsored by General Electric. Robert Mburu created a new alarm and monitoring system that can be activated and deactivated via a mobile phone or the Internet. What’s unique about this home alarm system is that it was entirely made by hand, all the way down to the circuit boards.” A young physics teacher, Mburu’s alarm system incorporates motion sensors, a digital display showing the number of intruders and has an efficacy of 98% up to 15m. Mburu’s prize is a week that will be spent learning from top GE scientists in Bangalore, India. Another inventor who benefited from Maker Faire Africa’s international media coverage was Kenyan Cyrus Kabiru, who created a visually stunning pair of sunglasses and has been commissioned by an Italian designer to make 100 pairs tobe used in the designer’s fashion show.

Other inventors included a youth group from Kibera (one of the biggest slums on the continent) that craft jewellery from discarded butcher bones and Norbet Okec from Uganda who showed off a prototype for solar-powered traffic lights. DM

Watch some of the inventors in action at Maker Fair Africa: Maker Faire Africa 2010 from Taylor Martyn on Vimeo.