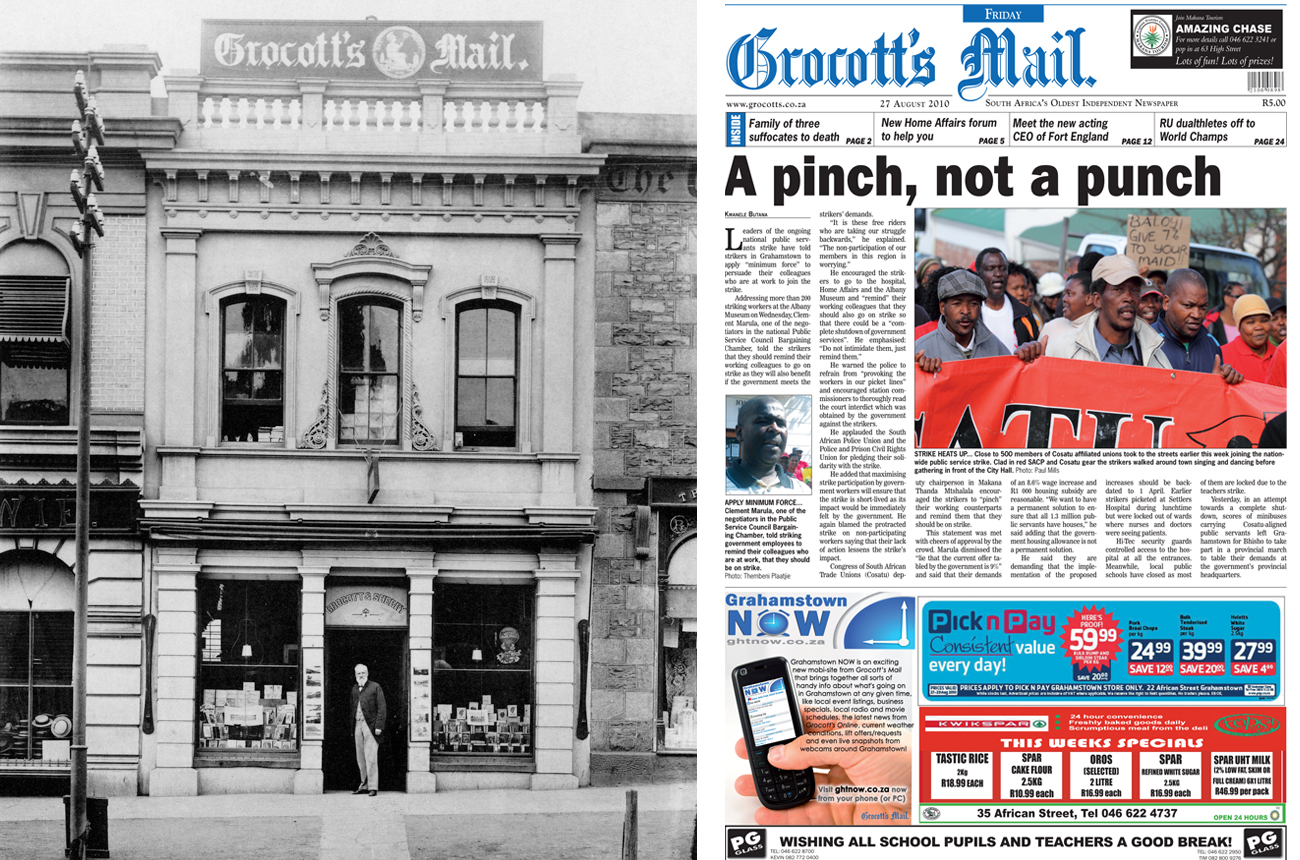 The oldest surviving independent newspaper in South Africa was launched 179 years ago in the frontier settlement of Grahamstown. Today it’s called Grocott’s Mail, and while it’s got all the quirks of a community paper, it has the tradition and gumption of a national player. By KEVIN BLOOM.

“Mostly the newspaper is quite parochial,” says Steven Lang. The statement is delivered matter-of-fact, evenly, as if it’s the most obvious thing in the world. And essentially the statement is obvious: Grahamstown, located some 130 kilometres from Port Elizabeth and 180 kilometres from East London, with a population of roughly 140,000 and a small-town sensibility that’s charmingly apparent in the proclivity of the locals to insult Johannesburg at every opportunity, is despite its reputation a backwater. There are few traffic lights, no dedicated live music venues, and an unemployment rate of 70 percent. By their own admission, what the good people of Grahamstown like to do best come nightfall is drink.

Still, it’s where the discussion moves after Lang’s diffident statement about parochialism that’s the important bit. As editor of Grocott’s Mail, the oldest independent newspaper in South Africa, the former SAfm presenter now sits atop a publishing tradition that – symbolically, at least – has regularly extended beyond the hidebound happenings of the town.

A case in point is the recent Eastern Cape conference of the ANC Youth League, where for all intents-and-purposes Julius Malema clawed himself back to the position of power he occupied in April – before the public love-in with Robert Mugabe and Zanu-PF. Lang sent out eight student reporters to cover the Grahamstown event, and later wrote a piece about it for The Daily Maverick. “Keeping journalists outside the grounds after having specifically invited them to attend the conference is one really dumb way of annoying the media and ensuring hostile coverage,” he observed. “However, to leave the exasperated journalists outside together with a bunch of enraged members who had not slept all night is as close to a perfect storm…as you can get.”

What Lang didn’t include in his piece for us was the story about one of those journalists, part of the group of eight Rhodes students on assignment for Grocott’s, who’d managed to get past the violently aggressive guards and seat herself in the conference venue. “The journalist said that Malema reserves most of his more bizarre statements for the media,” Lang explained, in response to a question about why we didn’t get to read the fruits of her labour. “After the press left, she said it was bland.”

While a first-person account of the student’s adventure might have made for great copy anyway, it didn’t happen – which is where the word “parochialism” could be applicable again, particularly as regards the tendency of small-town newspapers to cohere to a certain structure or tone. But the lost opportunity is in no way a measure of Grocott’s unwillingness to take on contentious issues. This, it would appear, they do with aplomb.

For Lang, who’d spent years bunkered in the SABC building in Auckland Park, the fact that the head office of the local municipality sits across the road from the Grocott’s newsroom has taken some getting used to. You can write about the municipal manager in the morning (for instance, that while he earns over R1-million per year, the sewage system is bursting apart) and the same afternoon bump into him in the Pick’n’Pay. Currently, the newspaper is working on a story about the five local councilors (who split an annual salary of R2,25-million between them) and the mayor (once a voluntary position, now recompensed to the tune of R614,000 per year) who’re all about to leave for a conference in India at a cost of R60,000 per head. When it’s published, Lang expects a measure of outrage. “We’re very close to the community,” he said. “People will go toyi-toyi outside the community hall and quote Grocott’s.”

That said, the newspaper is a far cry from what it was at the outbreak of the Boer War in 1899, when as many as five editions a night were printed and a steam whistle, installed on the roof of the premises, announced the latest issue. Back then, the editor was brought over from the Times of London and copy from the Reuters News Agency was a key part of the paper’s make-up.

The official history of the newspaper, released in 2009 to celebrate “178 years of independence,” provides a host of similar morsels. When steam power was introduced to power the presses in 1872, for example, the paper began to publish bi-weekly – on Tuesdays and Fridays, just as it’s published in 2010. “1905 brought a fire that burnt down the front shop but not the printing works,” the history continues. “The front shop was rebuilt in 1906 – the floor, the shelving, the glass covered cabinets, the windows, are the ones you see today.”

And it’s this same floor that the locals still walk across when they have a gripe with the editor. “Here, people show up and start screaming,” Lang told The Daily Maverick. “A year ago I had a guy who came in with a sjambok. He said a girl who’d worked for us had poisoned his son. I escorted him out.” DM

Main photo: Thomas Henry Grocott 1838 to 1912 – founder and original owner Grocott’s Mail standing in front of the shop that was burnt down in 1906 and rebuilt in the same place on High Street.