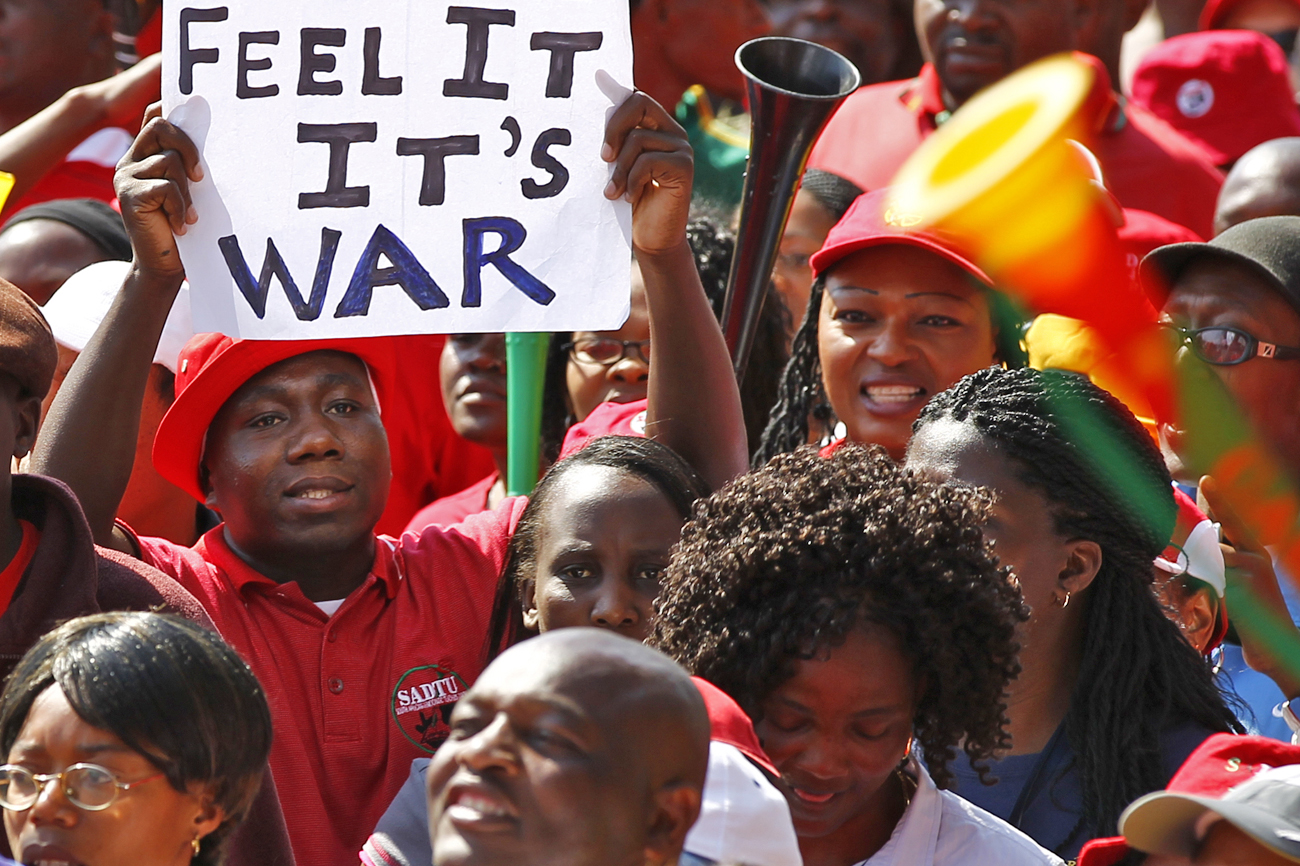 Every time we see Zwelinzima Vavi, he’s angrier at the ANC than he was the previous time. If the last Cosatu central executive committee ended burning with rage at the ANC, now it’s positively apoplectic. We wonder where he’ll go next, because our thesaurus is running out of words for “pissed off”.

The CEC’s statement is full of phrases such as “disappointment”, “frustration”, you know the drill. Perhaps the best written for the soundbite is “the alliance is again dysfunctional, the centre cannot hold and alliance summits are no longer possible”.

It sums it all up rather well.

But Vavi is a better writer than most and has another point to make. It’s one he’s been making all year, but now he’s got the writing taped. “The CEC further concludes that if we as the broad liberation movement don’t act decisively, we are heading rapidly in the direction of a full-blown predator state, in which a powerful, corrupt and demagogic elite of political hyenas increasingly controls the state as a vehicle for accumulation and use of that state.” In other words, we are all stuffed if someone doesn’t do something, and soon.

His choice of words is great. “Broader liberation movement” means he can rope in his friends on the third floor of Cosatu House, the SACP. And he’s going to do just that. Because workers being workers they actually have a plan of action, a list of things they’re going to do. They’ll start with launching a corruption unit of their own. That’s right. Staffed with accountants and lawyers and clever people who understand corruption. Perhaps Billy Downer and Vusi Pikoli should give him a call; it would make for a great Zapiro cartoon. But Vavi is also going to hold a “bilateral” with the SACP to discuss matters of mutual interest.

In case all of this sounds too much like what Jackson Mthembu refers to as an “opposition party”, Cosatu isn’t too worried about that. Cosatu president S’dumo Dlamini puts it thus: “This is not opposition talk, this is frank talk, we will not stay quiet on these issues.” Their history on this so far suggests that they won’t stay quiet at all, that the dark recesses of the ANC should know they have a fight on their hands.

When it comes to the media the same old fight continues. Vavi will not stand for a media appeals tribunal that is only to protect those who are corrupt. Dlamini says you have to ask why some people are pushing so strongly for the idea. He’s not questioning everyone’s motives, but he will question their priorities. For Cosatu, why is the media suddenly the “greatest threat to democracy” as Blade Nzimande put it, when South Africa has lost more than a million jobs in the last year. Like so many of Cosatu’s comments and questions, it is unanswerable.

But Cosatu is still stuck with the same old problem: How to make the ANC do what it promised to do in government. Up until now it’s simply cried out in anguish. Now it really has to start doing something.

And as we’ve pointed out numerous times, it has only two options, stay in the alliance, or form its own political party. For the record, Vavi says they’re not going to form a new party. But he does give himself a little wriggle room saying that kind of decision is up to the members of the unions who make up his federation.

Yet, the people with the real power are still within the ANC. They have the power to make or break the alliance. Mbeki made it a practice to use Cosatu as voting fodder during elections, before telling them to bugger off for the next four years. You’d think Cosatu had the picture by now. For some reason Vavi and company still think they have more power inside the tent than the reality shows.

Which leads us to question again, about what the real plan is. It seems Vavi is going on the offensive so strongly to force his opponents, the ANC’s dark recesses he’s fighting against, to show themselves. Then, perhaps, he can campaign on the anti-corruption ticket at the ANC’s next leadership election in 2012. If he wins, gets into the top six, Cosatu will obviously stay on in the alliance. But he’s also setting the groundwork now in case he doesn’t.

Photo: South African state workers seeking higher wages take part in a strike outside a hospital in Soweto August 19, 2010. Strikers blocked the entrances to two hospitals around Johannesburg and teachers vowed to blockade a main highway as a stoppage by more than 1 million civil servants expanded on its second day on Thursday. Reuters/Siphiwe Sibeko.