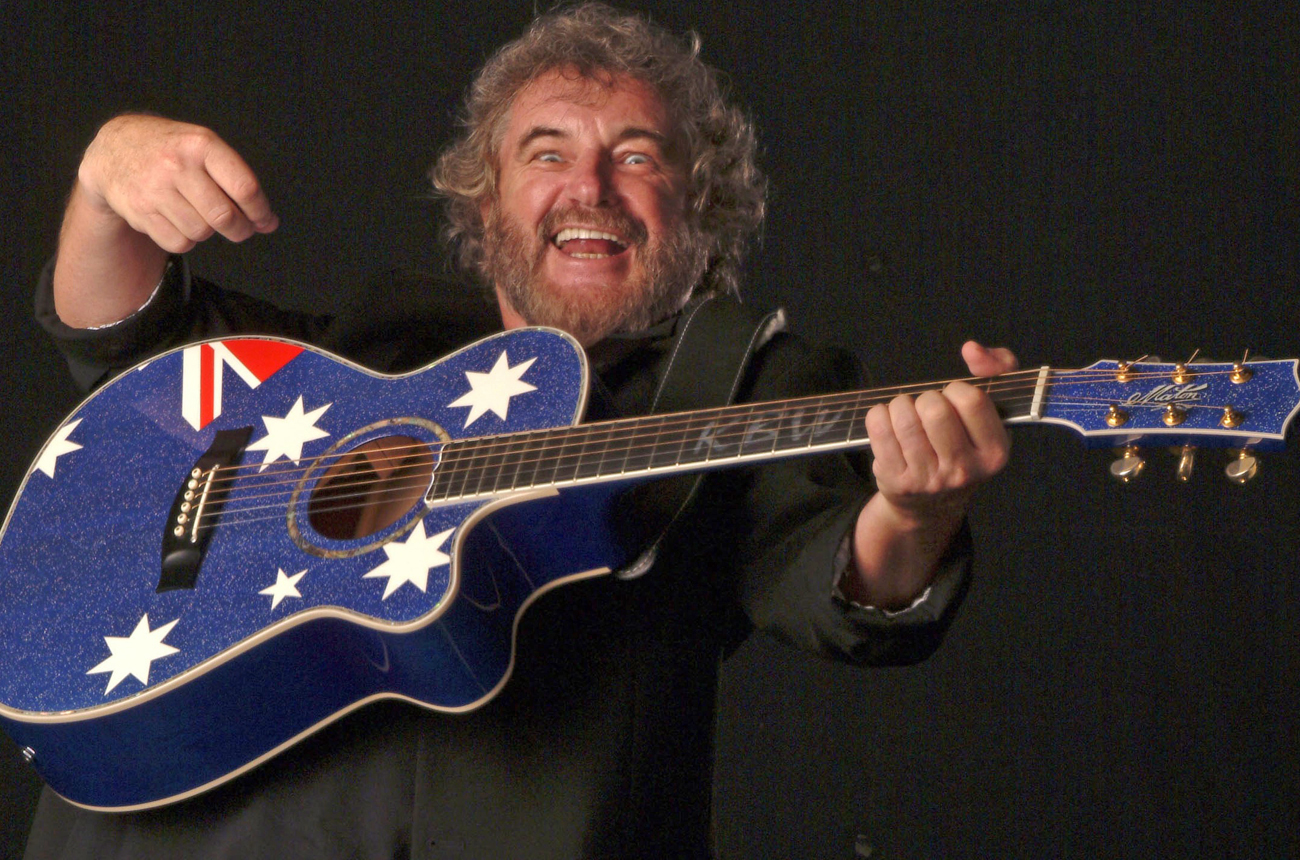 There is nothing in the least bit subtle about Australian comedian Kevin Bloody Wilson. He’s a social yobbo, taking the mickey out of anything and anyone. Treading on toes and grinding down harder, battering you with liberally scattered expletives and vulgar songs.

So why were we all laughing so much at what is essentially playground humour with even more vulgarity than the average schoolboy musters?

Partly because the smut, swearing and scatology are wrapped up in comedy that is more sophisticated than Wilson would care to admit. He virtually lobs you a verbal pile of doggy-poo with diamonds embedded in the middle.

But the main reason we laugh is because Wilson is saying the things nobody else dares say, and sometimes it’s fabulously funny. Even our raunchiest home-grown comics draw the line somewhere, yet Wilson strides across it shouting “Dilligaf”, his catchphrase acronym for “Do I Look Like I Give a F…”

Wilson gives us such great social commentary and comedy that you’re laughing despite thinking “how can he say that?” When he lays into the Muslims I was cringing and literally scanning the audience in Montecasino’s packed Parkers Comedy Club to see the make-up of the audience. No visible Muslims, but he would have probably pointed them out anyway.

He tells us how he was a huge hit in the US soon after the New Orleans flood disaster, until he sang his adapted version of the “House of the Rising Sun”. Blaming a suicide plumber for the saga of the rising floods sank badly, he boasts.

Wilson is an unapologetically loud, proud and crude Ozzie bloke. A man who really doesn’t care what we think – as long as we pay our money and laugh occasionally, presumably.We laughed more than occasionally, squirming as we did. Jokes about natural disasters and religious fanatics are as successful in South Africa as they are in Australia because both countries share the Dilligaf attitude, Wilson says.

The politically correct Americans or Europeans will pussyfoot around a subject, but when disaster strikes the South Africans and Ozzies may just laugh. Even the phrase ‘politically correct’ is an oxymoron, he points out. Although he didn’t use the word oxymoron, perhaps to avoid baffling the audience. It’s a contradiction, he declares, because anything political is rarely correct. That’s the cleanest joke he has, but it shows the intelligence hidden behind the loutish demeanour.

Wilson is best known for his songs – and he clearly is well known, since the audience was studded with people who knew the words. Most were funny, some were clever, and there’s no question that he plays his guitars well.

The show opens with a set by his gutter-mouthed daughter, bearing the brazen stage name Jennie Talia. Although given Wilson’s proclivity to find any rude words amusing, perhaps that’s her real name.

She’s a scummy mummy rather than a yummy mummy, and roams the stage like a foul-mouthed trucker – yes, that’s trucker with a T, cos she’s a big girl, our Jennie. Her crude songs are just about as amusing as her father’s, although I lost a quarter of the lyrics in translation. Still, by the time she quits your ears are attuned to the accent and ready for Wilson.

First we sit through an annoyingly self-congratulatory video, mostly showing him signing boobs as enthusiastic female fans give him a faceful. Watching one tit signing another is pretty dull, or at least it is for female members of the audience.

Still, we learn how many people Wilson has impressed around the world, reminding us that we’re expected to find him highly entertaining too.

He certainly gives value for money, holding the stage for two hours. Yet towards the end I’ve heard more than enough about goat shagging and other forms of sex in all its variations. I’m not offended, just slightly bored by it all.