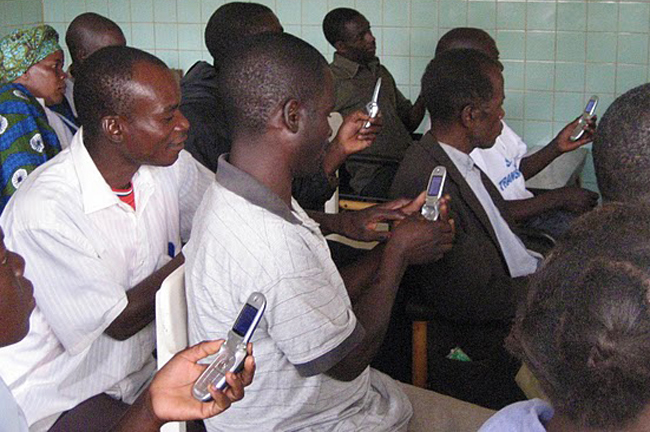 From human trafficking to organising scarce medical resources to mapping government shortfalls of essential drugs in Africa, FrontlineSMS is enabling activists, aid workers and NGOs to communicate effectively en masse. And all it takes is a computer, a mobile phone and a sliver of network presence.

St Gabriel is a rural hospital some 60km west of Lilongwe, the capital of Malawi. The medical facility is based in a rural area and cares for about a quarter of a million people.

Needless to say resources are precious at St Gabriel and the more astutely they are managed, the greater the benefit the hospital can deliver to the community. The hero in this story is a very basic piece of technology, but one that works wonders for anything from clinics to activists based in far flung places struggling to communicate with large groups of people.

Called FrontlineSMS all the system needs to operate as an effective communicator is a computer, a mobile phone and the text message-based software. The boon of this system is that it works where the Internet cannot reach and is a major benefit to marginalised NGOs and other rural organisations. “At St Gabriel the software is used to coordinate community healthcare workers running over a huge area to check if people are going to be available, when they are due to take their medication, and to mobilise communities when the mobile clinic is on its way,” says Ken Banks of Kiwanja who invented FrontlineSMS. “The communications tool allows people to get access to emergency health treatment from St Gabriels, which can send a motorbike from the hospital if someone has put a spade through their foot, or hurt themselves. The impact of a small, very low cost communications network in a place like that has a significant impact on the delivery of a rural hospital.” Following the success of FrontlineSMS at St Gabriels, the software is being used in rural hospitals in an increasing number of countries, enabling better management of scarce resources. It has been so successful that it has resulted in a spin off company called FrontlineSMS:Medic.

Watch Ken Banks speak at the ‘Soul of the Machine’ conference at Berkley:

Hailing from the UK’s Channel Islands, Banks was firmly entrenched in a financial and technology career, which by his own admission was rather boring, when in 1993 he joined a developmental mission to build a school in Zambia. The experience was life changing and a couple of years later he was back in Africa, this time in Uganda to build a hospital. By the time he returned to the UK, he had decided to study social anthropology and to find a way to use his tech skills to benefit the developmental sector.

“The thinking behind FrontlineSMS came out of working in the Kruger National Park in 2003 and 2004 when the parks were thinking about communicating with communities around them. They wanted a system that would allow the park to send a hundred messages to a hundred village elders to set up meetings; to ask people information about when they had last seen a particular animal; or to ask people’s opinions about the relationship between the park and the communities,” said Banks. When looking for an answer to the park’s problem, Banks found that all the available SMS-based software was Internet reliant. “The problem with that was that you couldn’t get online at the Kruger Park at that time. It got me thinking that there were probably other organisations around the world that were also working without the Internet and who wanted to start sending large numbers of text messages to people.”

The idea behind FrontlineSMS was to build an application that could run solely off a computer with a mobile phone attached to it. The real trick was to send the messages through the mobile network and not use the Internet. “Once you’re set up you can send and receive messages anywhere as long as there is a single bar of mobile phone coverage,” said Banks.

Watch a short introduction to FrontlineSMS, a winner in the 2009 Tech Awards:

“There are still massive amounts of non-profits working in remote areas that want to start using messaging to send market prices to farmers, to communicate health messages or to monitor elections. Many of these organisations work in areas where the Internet still doesn’t exist and FrontlineSMS could fill that gap,” said Banks.

The uses of FrontlineSMS have been as many as they have been varied. After a slow start the application was used to monitor elections in Nigeria in 2007, and the news was picked up by the BBC. “After the first couple of years we had 80 or 90 downloads, but after the Nigerian elections, we released a new version and it has been downloaded about eight-and-a-half thousand times. The interest in, and use of the software has just blown out of all proportion and it was no longer possible for me to do the work on my own. I couldn’t do the programming, the support, bug fixing, the outreach, the documentation and all the other things required to support this system.” Funding from Pierre Omidyar through the eBay founder’s Omidyar Network, together with other donors, allowed Banks to finance The Kiwanja Foundation which supports the growth of FrontlineSMS, which is also pioneering other developmental technologies. The most remarkable thing about FrontlineSMS is how the system is being used. One of the first groups to use the tool was the Kubatana Trust of Zimbabwe, a civic society body that educates people about human rights, legal rights and democracy. “Kubatana mobilises and empowers people by informing them about the situation in Zimbabwe and offering accurate insights about the state of democracy,” said Banks. Initially Kubatana was using traditional media such as newspapers and newsletters, “but we’re seeing that mobile phones in a lot of the places.” Now Kubatana has a communication network that sends out text alerts and information to large numbers of people and allows recipients to report on incidents related to human right violations.

In East Africa the software is being used with Ushahidi to map drug shortages in clinics. “There’s a map of East Africa now that shows where you can’t get essential drugs. It’s a useful way of showing government transparency and how people are being denied,” said Banks. In Cameroon, Vietnam and Haiti the software is being used by Survivors Connect to educate communities on human trafficking, and to encourage people to report incidents of trafficking and slavery. “In Nicaragua FrontlineSMS helped clinics collect information during a recent dengue fever outbreak. The clinics used the health ministry’s system up to a certain point, but then the Internet ran out. Where the Internet runs out is where our software starts working and really comes into its own.”

Read “The Mobile Revolution’s Hidden Cost”  by Ken Bank at PCWorld, “Mobile technology takes centre stage in disaster relief” in The Guardian. Ken Banks will be in South Africa at the end of September to speak at Mobile Web in Africa 2010.