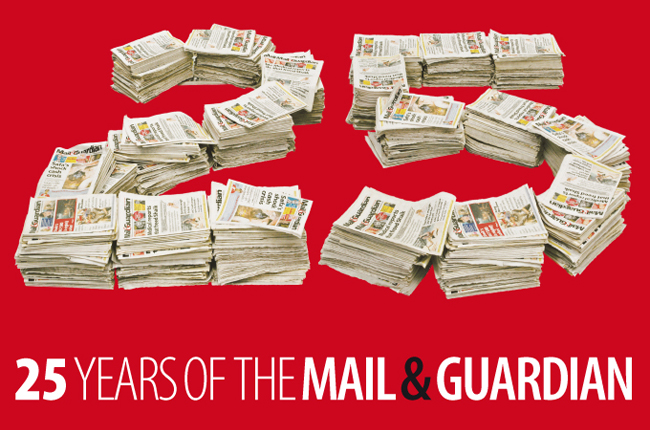 Assuming members of the ANC will actually read it, publication of the book 25 Years of the Mail & Guardian couldn’t have happened at a better time. Because here we have, in glorious full-colour, incontrovertible proof of who the newspaper supported in the years when it was kind of dangerous to do so.

The opening line of the excellent full-colour history of what is modestly called “South Africa’s most interesting newspaper” is a revealing one. It’s written by the Mail & Guardian’s proprietor Trevor Ncube, and it goes thus: “The best defence of media freedom is commercial viability.” To read that line in Johannesburg in mid-August 2010 is to reflect with concern on its truth. The Mail & Guardian’s commercial viability, which may have been questionable in the past but is now beyond dispute, doesn’t appear to mean much to the ANC’s anti-press commissars. Of course when he wrote those words, Ncube, who also publishes The Zimbabwe Independent and The Standard, couldn’t have guessed what was about to happen in South Africa. His local asset had been successfully waging war against media repression since 1985.

Edited by Shaun de Waal, the book 25 Years of the Mail & Guardian is a compelling snapshot of “the little newspaper that could”. Starting with the paper’s first lead story, which was about Renamo being allowed into prisons to recruit people, the book is in essence an object lesson in what’s possible when good journalists refuse to be silenced.

The Weekly Mail, as it was then known, was famously launched by a group of reporters who’d been left redundant by the closure of the Rand Daily Mail and Sunday Express. Early in the book we see a clipping of the editorial that announced its statement of purpose: “It was time to have a newspaper created, controlled and owned by journalists.” The following pages present in lavish detail a range of spreads that combine to form the narrative of a nation in flux. The lead “PW tells the world to be damned” set beside an action shot of security policemen grappling with law student Firoz Cachalia on the campus of Wits University (August 1985); the presentation of an internal advert calling for the unbanning of the ANC three weeks after the Rand Supreme Court had declared the advert illegal (February 1987); the charmingly self-deprecating plea “Save the Wail” after apartheid Minister of Home Affairs, Stoffel Botha, warned The Weekly Mail in the Government Gazette that it was threatening public safety (May 1988). Read by current members of the ANC’s national executive, these pre-1990 spreads might serve as a helpful reminder.

There are also some post-1990 pictorials that could be equally helpful. For instance, the injunction “Take the Gap, ANC” on the paper’s front page in the week that FW de Klerk decriminalised the organisation. Or the photograph of a recently freed Nelson Mandela with the paper’s founders Anton Harber, Irwin Manoim and Shaun Johnson, alongside the information that the first press interview Mandela gave as a free man was to The Weekly Mail.

Likewise, members of the current ANC may want to read, and reread, the following paragraph from Harber’s essay contribution to the book: “But in a lifetime of journalism one can snatch a few moments when one does things just because one is telling a story that someone important does not want told, and because it has the ring of truth. We spend much of our time as reporters counting sources, double-checking facts, getting reaction, but the best stories are those that one knows in one’s gut to be true. Even better when it is a truth that will keep someone in authority awake at night.”

Then again, maybe the current ANC members don’t really want to read this paragraph. While Harber’s words were about the early years at The Weekly Mail, which “had more than their fair share of this kind of energy,” the rest of the book shows quite convincingly that it was an energy that never really left the newspaper.

Through the years beginning when the UK Guardian bought into the newspaper and it became known as the Weekly Mail & Guardian, and later simply the Mail & Guardian, it has remained more or less true to the principles on which it was founded. As evidenced by the later spreads in the book, the paper “held Mandela to his promise of progress within 100 days of the new Government of National Unity’s inception,” and such uncompromising evaluations would become a regular feature of the M&G, notably – but far from exclusively – in the form of annual report cards for all government ministers.

In light of the proposed Protection of Information Act and Media Appeals Tribunal, it’s not entirely correct to ask at what point the ANC became properly fed up with the Mail & Guardian – it hasn’t been the only paper, to paraphrase Harber, keeping people in authority awake at night. But, whatever The Party says about incompetent journalism driving its policies, it’s clear that the M&G’s investigative tradition has played a major role in bringing the perennial battle between media and government to the boil.

Under the post-Harber/Manoim editorships of Phillip van Niekerk, Howard Barrell, Mondli Makhanya, Ferial Haffajee and, currently, Nic Dawes, the paper hasn’t let up; it’s probed and irritated and exposed, and has hardly ever apologised. Recently we’ve seen leads like “Mob Nation: A story of a country that exploded” (May 2008), “Nyanda Inc makes millions from govt” (January 2010) and “’I live on handouts,’ says Julius Malema” (March 2010).

While Shaun de Waal’s book isn’t only about the hard-hitting front-page news items that have come to define the M&G – there are equally compelling visual and textual reflections on the paper’s marketing tradition, its arts and culture commentary, its digital innovativeness, and (essentially) its people – it is mainly about that. How could it not be? And a good thing that it is too, because the book has been released just in time to remind ANC members of certain things they’d rather forget.