Smit, Boks defeated at the death in Soweto

Smit, Boks defeated at the death in Soweto 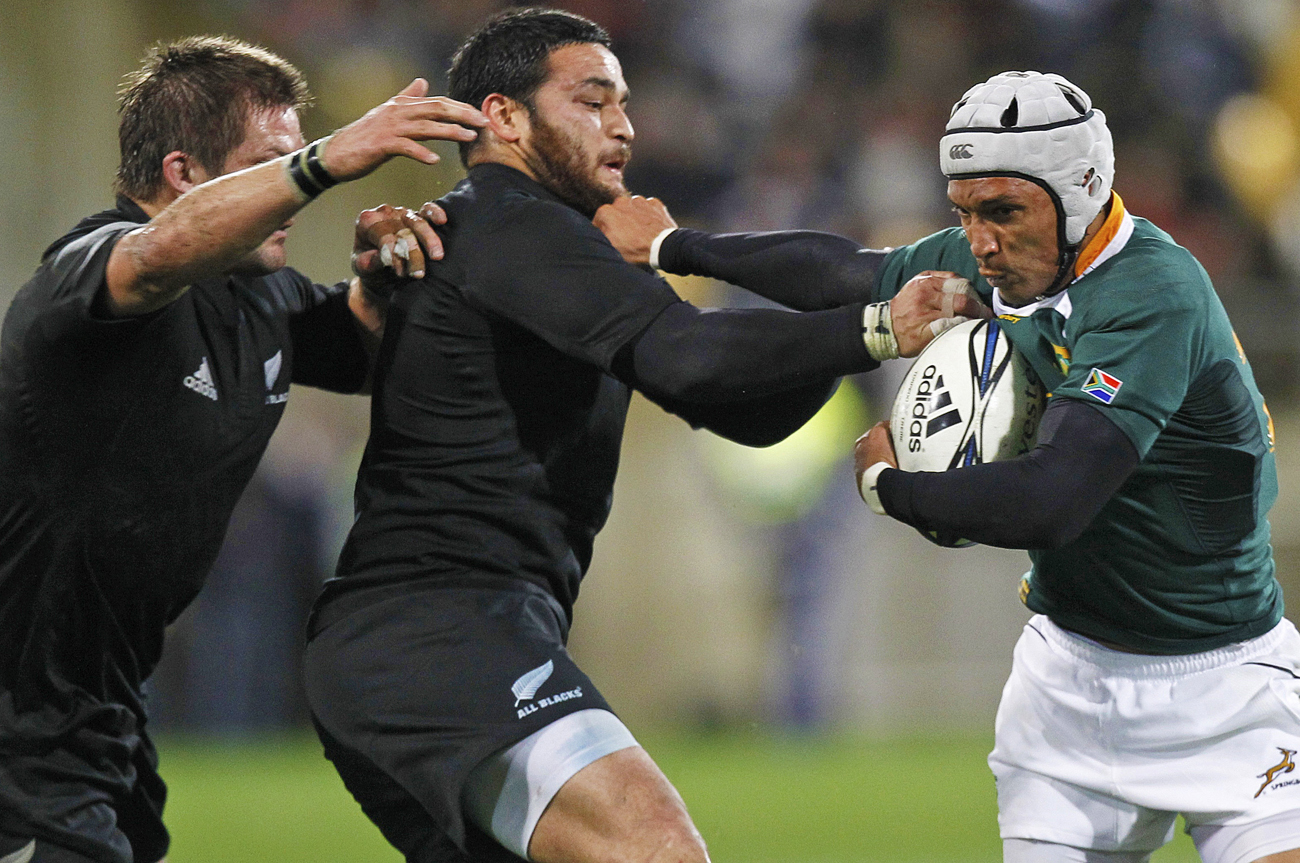 Almost, just, nearly. The Springboks came so close to giving John Smit a win for his 100th cap in the first rugby Test in Soweto, but once again left with a loss.

What a cruel, heartless bitch fate is. Leading by five points with three minutes to go, the rejuvenated Springboks looked as if they were going to seal John Smit’s 100th cap and the first Test in Soweto with a win.

But fate had other ideas. How else can you describe the sequence of events that turned the tide against the Boks, who played with a passion and accuracy that has been missing in their Tri-Nations campaign so far.

A blatantly forward pass by Israel Dagg to Mils Muliaina (and right in front of the touch judge) set up Richie McCaw to score in the corner on 77 minutes. His 18th try, and fourth against South Africa, was referred to the TV official who took several minutes to rule that McCaw’s foot was not in touch as he was tackled by Bryan Habana and Jean de Villiers in the corner. It was a 50-50 decision that could have gone either way. Dan Carter missed the conversion, perhaps because of Gio Aplon’s aggressive chasing.

De Villiers then slipped in the next move, and the All Blacks swarmed over, took possession and the ball went out to Ma’a Nonu.

And then the rugby gods smote John Smit, who couldn’t hang on to Nonu with less than a minute of time left. Dagg was on hand to finish the move and give the All Blacks the lead for only the second time since the fifth minute of the match. The scoreline read 29-22 to the All Blacks, but the defeat was so much more comprehensive. Smit’s face, with blood-gushing from a cut below his eye, was the ultimate picture of defeat.

The rugby gods are truly the cruellest of them all. “I can’t think I’ve ever been more disappointed – to lose your 100th Test with a missed tackle at the death and watch a try being scored. It is going to hurt for a very long time,” Smit said afterwards. Handed a gold cap by SA Rugby president Oregan Hoskins and holding his young son and daughter, he was the picture of misery.

It had begun with such vigour, and the Boks had seemingly found the inspiration that had been lacking. Smit took the field where the Soccer World Cup final had been played a month ago alone, his walk down the tunnel broadcast on the big screen where 94 000 fans erupted when he appeared.

The haka was drowned out in rounds of “Ole Ole” and the Boks were a different side to the one that turned in sub-par performances own under. They played with urgency and purpose that has been lacking all year and when Schalk  Burger scored from a 5m quick-tap penalty in the 24th minute, it seemed like it might be Smit’s day.

Juan Smith made a stirring return to Test rugby with solid ball-carrying, giving the Boks the much-needed go-forward and nailing his opposite number McCaw in a huge tackle just after the break. Pleasingly, the Springbok newcomers injected some much-needed fire.

Francois Hougaard did more than enough to show that when Fourie du Preez departs for Japan after next year’s World Cup, there will be a worthy successor. Hougaard was full of running and strong in defence.

Gio Aplon, despite criticism over his size, had a few strong runs and monster tackles – he even lifted Muliaina and ploughed him back. Although he gave a penalty away for a high-ish tackle that let Daniel Carter put the first points on the board, Juan de Jongh had fine game, as did Flip van der Merwe.

The defence was still not up to scratch and the Boks looked suspect when the All Blacks spread it wide or countered from broken play and the Boks look on almost in wonder as Tony Woodcock, the loosehead prop standing out on the wing, lumbered over just before half time. The Springboks still led 16-14, thanks to two penalties and a conversion by Morné Steyn. Carter added two more penalties, but missed Woodcock’s conversion.

After the break Steyn added another two penalties and Carter another as the Boks hung on manfully at 22-17 until those ill-fated last three minutes.

Ultimately the All Blacks played a better game and deserved to win what was an outstanding game, in keeping with being the historic first Test in Soweto. The forward pass that led to McCaw’s try changed the result of the match and was an inexcusable oversight by referee Nigel Owens and his assistant. It seems incomprehensible that the TMO is not empowered to inform the ref of the missed infringement when it was broadcast to 94 000 baying fans on the stadium’s big screen immediately afterwards.

Rugby doesn’t deserve such cruelty, nor did Smit.