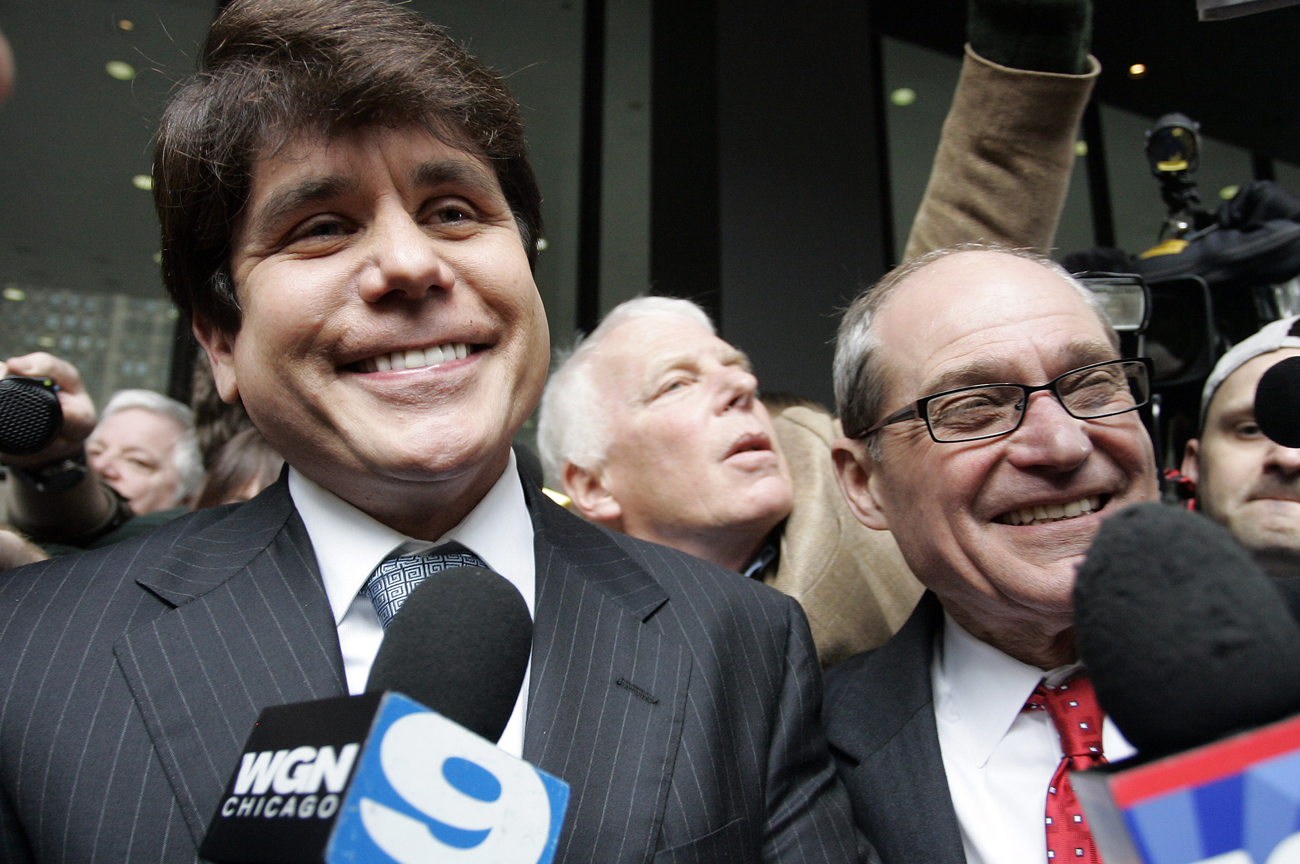 A US federal jury has found former Illinois governor Rod Blagojevich guilty of lying to federal agents, but the jury deadlocked on 23 other more serious charges, including the most explosive one  - that he had tried to auction off an appointment to fill President Barack Obama's post-2008 Senate seat. His lawyers' defence: He is too stupid to be a real criminal.

The governor was required to appoint an interim senator to occupy the unexpired portion of Obama’s term as an Illinois senator. The jury was deadlocked with 11 in favour of his conviction and one opposed on several of these more serious charges. The maximum sentence for his one conviction would be five years in prison – much less than would it have been had he been convicted on some of the other charges.

Federal prosecutors have already pledged to retry the case as soon as possible. US attorney Patrick Fitzgerald said prosecutors will retry Blagojevich on some of the 23 other counts, including extortion, bribery and conspiracy as Blagojevich had effectively turned his office into a “corrupt ring” to trade Obama’s old Senate seat for jobs and money. Stop us if we again quote the dialogue from the film “Casablanca” about being shocked that there is gambling in the casino.

After the trial, Blagojevich told reporters, “This jury shows you that the government threw everything, but the kitchen sink at me. They could not prove I did anything wrong – except for one nebulous charge from five years ago.” Blagojevich vowed to appeal his conviction on that one charge and declared he was a victim of persecution by the federal government. The former governor’s brother, and co-defendant, Robert Blagojevich, said the jury’s determinations showed Blagojevich was “an innocent target of the federal government”. Sounds familiar, eh?

But a former federal prosecutor, Joel Levin, the man who helped convict former Illinois governor George Ryan on corruption charges, told the media that the fact that so many jurors were convinced of Blagojevich’s guilt actually bodes well for prosecutors. Levin said, “At the end of the day it signals very strongly they will get a conviction next time. It sounds like the case was lost in jury selection.” The charge Blagojevich was convicted on included accusations he had lied to federal agents when he said he did not track campaign contributions.

However, in comments to the media afterwards, several jurors said the government’s complex, convoluted case had been very difficult for them to understand, let alone convict him on. Blagojevich’s attorneys, meanwhile, had argued that the former governor was a big talker, but he was not a criminal. They also gambled on the trial’s outcome by deciding not to call any witnesses or to have Blagojevich testify in his own defence.

Blagojevich’s lawyer, Sam Adam Jnr, in his closing arguments at the trial, effectively argued the governor was simply too stupid to be taken seriously as a real criminal. “No one’s going to say he’s the sharpest knife in the drawer, but he’s not corrupt. Think about who he was trying to extort. The president of the United States? Give me a break!” Hmm….

Federal Judge James Zagel immediately scheduled a hearing for 26 August to decide on the manner and timing of the retrial. This is something that could well take place at the height of the fall midterm election campaign – giving Republican political strategists something over which to rub their hands with glee as they anticipate a retrial’s effect on Democratic chances in the upcoming elections. Obama’s Democrats already believe they face tough challenges by Republicans in various congressional races, and a Blagojevich retrial, with all it implies from sleazy testimony about Illinois politics, could well make the Democrats’ chances that much tougher in the US’s autumn.

Throughout the trial, Blagojevich, a showman-like politician with a trademark shock of luxuriant hair and the man who had already been relieved of the governorship in 2009 by the Illinois senate in a 53-to-0 vote, (after first being impeached by the Illinois House of Representatives) appeared bolstered by his boisterous supporters at the courthouse.

In recent years, besides his antics as governor, Blagojevich has hosted a weekly radio show and has fallen asleep on air before getting fired by Donald Trump on NBC’s “The Apprentice”. And his wife has eaten a live tarantula “as an act of love” and bonded with the stars of MTV’s “The Hills” on the reality show, “I’m a celebrity … Get me out of here!” We definitely couldn’t have made this stuff up. It just has to be recast as a really bad, direct-to-DVD movie before the year is up.

As he left the courthouse, Blagojevich received a huge round of applause from the courthouse crowd. Many of his supporters seemed to feel he hadn’t done anything wrong as so-called “pay for play” Chicago politics is the norm there. This is the city, after all, that coined the phrase, “Vote early; Vote often” and where “Chicago-style” means big-shoulder, hard-knuckle, sharp-elbow politics and business.

Moreover, Blagojevich’s trial was just another chapter in Illinois’ tortured history of crooked politics. Blagojevich’s own predecessor, George Ryan, was convicted of racketeering in 2006 and is now in the “big house”, serving his own six-and-a-half-year sentence.

Throughout the trial, Blagojevich’s attorneys besieged Washington and Illinois political figures with subpoenas to testify on Blagojevich’s behalf – including White House chief of staff Rahm Emanuel and Senate majority leader Harry Reid. However, by the time Blagojevich’s trial ended, none of these top-tier figures had actually been called to testify in the highly public trial. A retrial could make this circus happen all over again.

For more, read AP, Politico and The New York Times.

Photo: Former Illinois Governor Rod Blagojevich (L) and his attorney Sheldon Sorosky smile as they walk through a pack of reporters as they leave the Dirksen federal building after his arraignment hearing in Chicago, Illinois April 14, 2009. Blagojevich was arrested on corruption charges in December 2008, which led to him becoming Illinois’ first governor to be impeached when the Illinois House of Representatives voted 114-1 to impeach him Jan. 8, 2009. REUTERS/Frank Polich