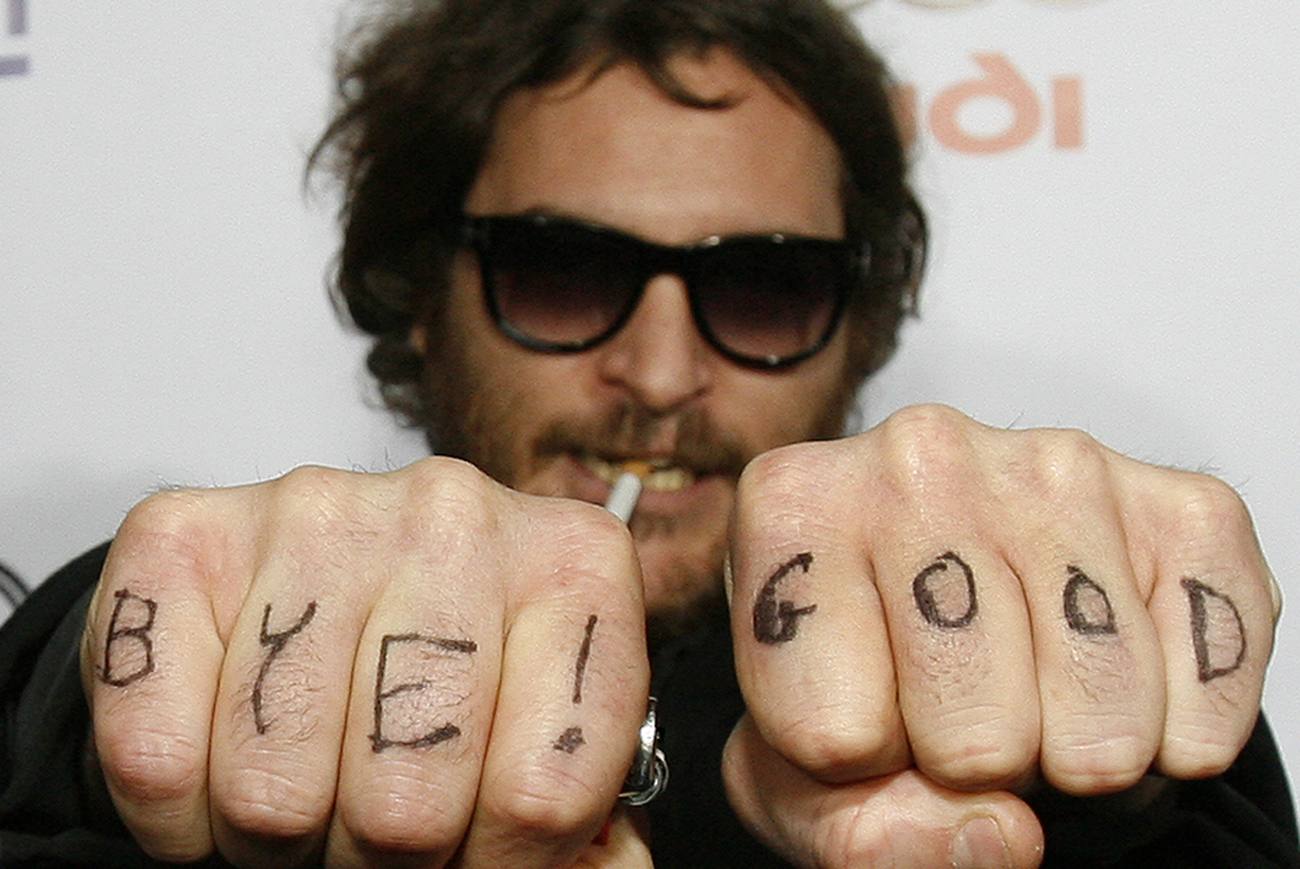 The first trailer of the documentary I’m Still Here: The Lost Year of Joaquin Phoenix has just been released. Irritatingly, if you want an explanation for the Oscar-nominated actor’s recent behaviour, it isn’t the place to look. So we offer instead a comparison to Andy Kaufman.

In June 1980, Andy Kaufman appeared on the David Letterman Show for the second time in his career. He wore bright yellow pants and a faded mauve jacket, he hadn’t shaved for days and his hair was uncombed. He sat down with a look of frightened confusion, and proceeded to wipe his nose with the back of his hand.

“Tell me about Taxi,” Letterman said – Taxi was a network sitcom – and Kaufman, eyes glazed, mumbled something incoherent before wiping his nose again. Eventually, after Letterman had handed him a handkerchief, Kaufman said he wouldn’t be doing Taxi anymore. He didn’t say why, just that he wouldn’t be doing it, and no, he didn’t have anything else lined up.

Then he moved over to a stool somewhere else in the studio to do a show, which turned out to be a story delivered in monotone about his marriage and his career. “I’d rather, uh, if you don’t laugh…because I’m not trying to be funny or anything,” he said, halfway through his story.

Kaufman’s genius was that he could draw a range of reactions from his audience, and he didn’t really seem to care whether those reactions were laughter, anger, discomfort or pity (as in the scene above). He rejected the label “comedian,” preferring instead to be known as a “song-and-dance man,” but whatever he was, all efforts to pin him down have remained singularly unsuccessful.

“Despite Hollywood’s recent misguided attempt to tell his story as a conventional show-biz biopic,” the New York Times noted in 2000, referring to the feature Man on the Moon, “Kaufman was a complex artist (and an artist was exactly what he considered himself) who remains elusive more than 15 years after his death. Was he a misunderstood visionary, a self-indulgent prankster, an out-of-control lunatic or simply a gifted comedian with some odd ideas about what was funny?”

If these are the same questions Joaquin Phoenix wants the media to ask about him one day, he’s going about it the right way – except for the qualification that Phoenix, in his latest incarnation, is never funny. When the supremely talented star of Gladiator and Walk the Line appeared on Letterman in 2009, he didn’t offer the audience a thing. Unlike Kaufman, whom he was almost certainly referencing, he allowed no theoretical space for relief.

The unkempt hair and beard, the dark glasses, the refusal to engage with Letterman on any level other than the willfully ornery and bored: these seemed less a comment on the state of the entertainment industry than a big “fuck you” to the industry. Letterman, who’d handled Kaufman superbly in 1980 and appeared even to be enjoying the interaction, was reportedly furious.

But while Phoenix didn’t win any friends on that show, he did leave an intriguing question – what we he up to? The line that he was abandoning acting for a career as a rapper didn’t seem to fly for the simple reason that he was, and is, a self-consciously awful musician. Neither did the line about a mental breakdown seem to hold much water – it was too obviously engineered to take place before an audience, and real breakdowns don’t get engineered. So was it then more a comment on breakdowns than a comment on the entertainment industry?

Whatever the answers, the documentary I’m Still Here, directed by Phoenix’s brother-in-law Casey Affleck, was supposed to provide them. William Morris Endeavor, one of the top agencies in Hollywood, started showing the movie to potential distributors earlier this year, and in May the Los Angeles Times got a pre-screening too. The take of both was that they still had no idea whether Phoenix was pulling an elaborate prank or whether he was insane.

Noted the LA Times: “It’s far from the Joaquin Phoenix you’re used to seeing onscreen: snorting cocaine, ordering call girls, having oral sex with a publicist, treating his assistants abusively and rapping badly. And not, apparently, playing a role – or was he?”

Another thing Phoenix apparently does in the film is lie sleeping while a rival musician defecates on his head. Fortunately that scene doesn’t appear in the first trailer of I’m Still Here, which has just been released. What we get in the trailer instead, as the Guardian notes, is more of the “bumbling, incoherent” Oscar-nominated former actor. “Against the backdrop of a stirring yet pretentious monologue (something about ‘mountaintop waterdrops’ and plumbing the depths for true solace), our man scuffles, lurches and scowls his way through just over a minute of what appears to be utterly random behaviour.”

On the face of it, then, Kaufman and Phoenix are worlds apart. The former accorded infinitely more respect to the essential relationship between performer and audience, he was way less misanthropic and impertinent. But if Phoenix and Affleck are constructing a comment on the modern entertainment industry – or on breakdowns, or on breakdowns within the entertainment industry – it has to be said that the environment of the early 1980s was a lot more innocent than today’s reality-based, shock-proof universe.

And in such a context, as potential Hollywood buyers for the documentary told the LA Times, we’ve “never seen anything like it.”

Photo: Joaquin Phoenix displays words written on his fists as he poses for photo at the Los Angeles premiere of the movie “Che” during the AFI Fest 2008 at the Grauman’s Chinese theatre in Hollywood, California November 1, 2008. REUTERS/Mario Anzuoni