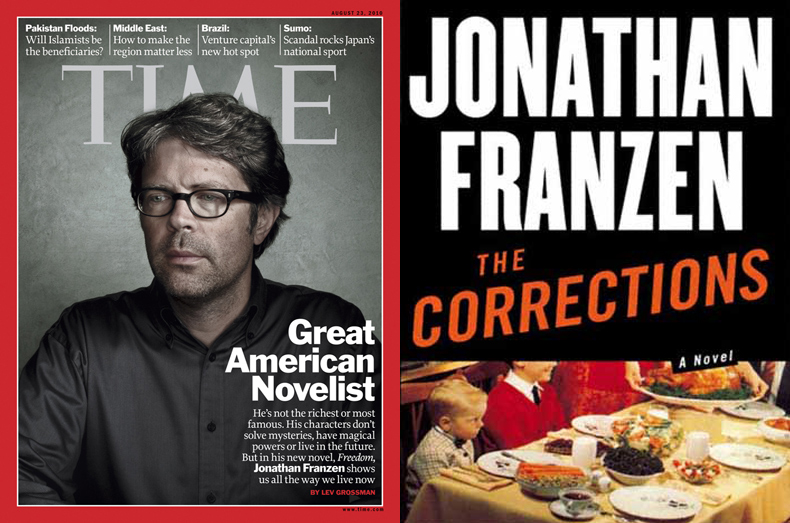 For decades now, serious literature has existed outside the mainstream, a sideshow in popular culture. Time magazine may be trying to stage a comeback by placing an author on their cover, but the odds against the attempt succeeding are huge.

It’s conceivable that this kind of media attention hasn’t been lavished on a writer since Marilyn Monroe appeared on the cover of Time magazine tousling the hair of Norman Mailer. The year was 1973, and while the composition of that now-famous cover – Monroe in full-colour extending all the way up into the masthead, Mailer in black-and-white confined to the bottom half – left the audience in little doubt as to who was the real icon, the mere fact that an author could hold his own in such company was in itself a coup. Literature, the editors of Time were suggesting, was somehow managing to survive in the ring with the silver screen.

That was then. The only excuse for extending the boxing metaphor is that Mailer might have approved, but in the 37 years since that cover, literature has been hit repeatedly in the head, knocked off its feet, left bloodied and dazed on the canvas. In fact, the towel was thrown in long ago, and for decades literature has been walking around punch-drunk and crushed, an ungracefully aging has-been.

Like a misguided Muhammad Ali in the early ‘80s, could literature now be staging a comeback? Because, say what you want about Time magazine, the latest cover of the English-speaking world’s most influential news weekly has Jonathan Franzen on the cover. The bold print says “Great American Novelist,” and the small print explains: “He’s not the richest or the most famous. His characters don’t solve mysteries, have magical powers or live in the future. But in his new novel, Freedom, Jonathan Franzen shows us the way we live now.”

To say that the move is uncharacteristic of Time is unnecessary. The last author to grace their cover was… well, whoever it was, it was ten years ago. When Time’s editors pronounce on popular culture, as they still like to do, it’s still the movie stars they go for. Remember Kate Winslet on the cover the week before last year’s Oscars, next to the barker “Best Actress”? That was Time, in all its sophistication, pronouncing on popular culture. Fortunately for them Winslet did win the Oscar, and the editors were confirmed once again in the eyes of their millions of readers as the arbiters of good taste and refinement.

With Franzen, somewhat less fortunately, it’s different. This is the man who wrote in a seminal essay for Harper’s magazine in 1996 that because the world didn’t share his particular faith in literature – because, for instance, Americans preferred TV to Henry James – he must be living in End Times. This is the man who, after he updated that essay for a 2002 collection and gave it the title “Why Bother?”, let stand the following line: “At the heart of my despair about the novel had been a conflict between a feeling that I should Address the Culture and Bring News to the Mainstream, and my desire to write about the things closest to me, to lose myself in the characters and locales I loved.” This is the man who, knowing he’d resolved the above conflict in his masterpiece The Corrections, nevertheless refused an invitation to go on Oprah to talk about it.

So why has Franzen agreed to appear on the latest cover (August 23 2010, Vol. 176 No. 8) of Time? You could argue that nobody in their right mind refuses such an opportunity, but then of course nobody in their right mind refuses Oprah either. As every profile of the author makes clear, Franzen is a complicated and intense individual – his close friendship with the late David Foster Wallace is proof enough of that – so it’s difficult and perhaps presumptuous to guess what’s motivating him. If you had to guess, though, you might not be far wrong if you said that he believes Freedom, his latest novel, is as good as he intended it to be, better even than The Corrections, and that he’s therefore decided to do what needs to be done to get the world reading it.

The fact that Michiko Kakutani, leading book critic for the New York Times, loves the novel is particularly significant. Franzen once called Kakutani the “stupidest person in New York,” and she’s nothing if not a woman who bears grudges. Yet she signed off her critique, published on 15 August, with these extraordinarily rare words: “Mr. Franzen has written his most deeply felt novel yet – a novel that turns out to be both a compelling biography of a dysfunctional family and an indelible portrait of our times.”

Praise from Caesar is praise indeed, as the saying goes. Still, it would take something of the order of War and Peace, a comparison that Kakutani calls laughable, for Franzen to be the man to put literature back in the ring. Popular culture, despite Time magazine’s once-off effort, has almost certainly moved on.