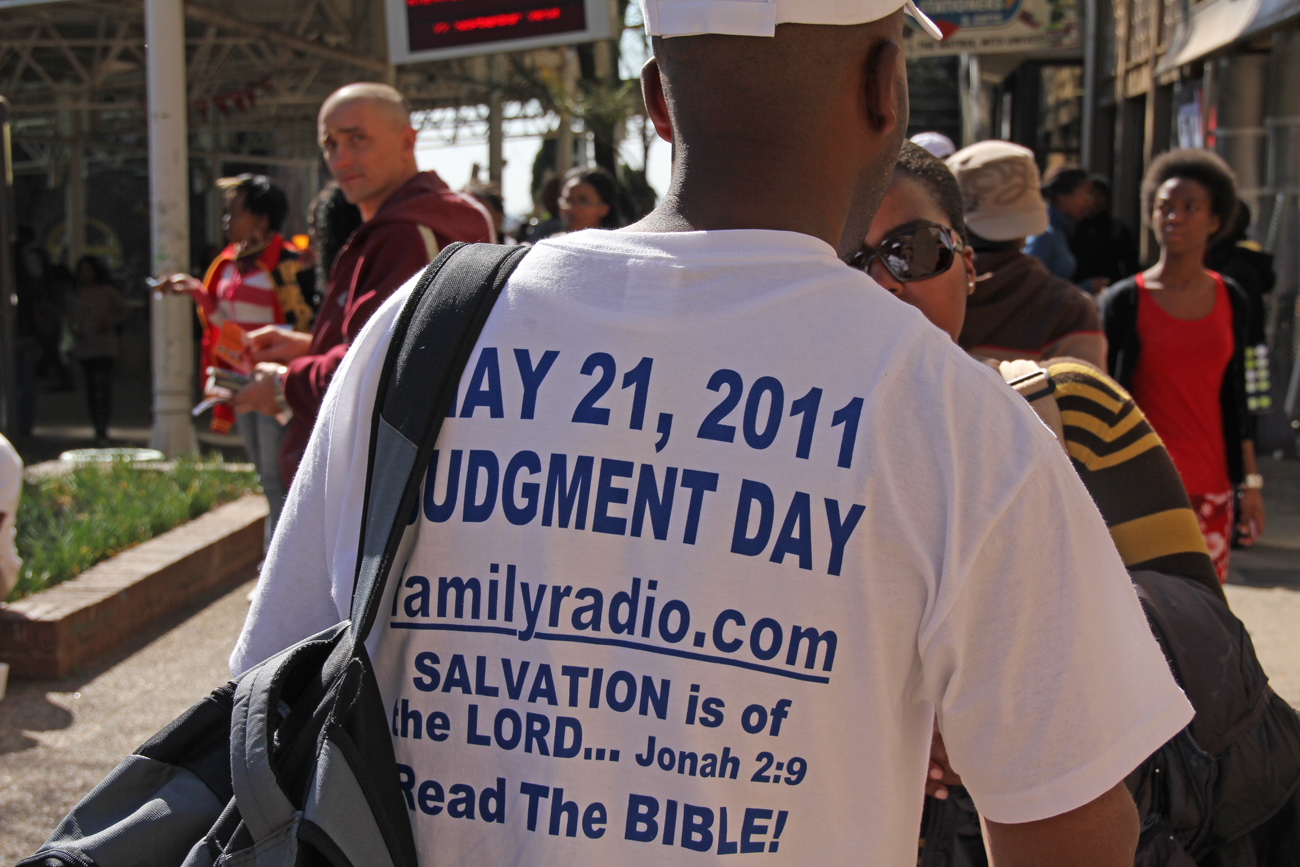 On Thursday 12 August, a 28-member delegation arrived at the Orion Hotel Devonshire in Braamfontein, Johannesburg. Nothing strange about that, except the fact that the hotel is used to hosting sports and business delegations and they weren’t anything of the sort. They were a Judgment Day delegation. On 13 August, The Daily Maverick was there to meet them.

The Orion Hotel Devonshire on the corner of Melle and Jorissen Streets in Braamfontein, Johannesburg, is aimed at the “discerning business traveler and conference delegate.” It claims to be 25 minutes from OR Tambo International Airport and ten minutes from the “shopping Mecca” of Sandton City. Within walking distance of the hotel are Wits University, Park Station, the Joburg Theatre Complex (formerly the Civic) and the Constitutional Court. Thousands of pedestrians, many of whom work in the high rises and commercial office blocks of central Braamfontein, pass by the entrance of the Devonshire every day. In Johannesburg, it is the perfect place to stay if you wish to announce the imminent arrival of the End of the World.

On Friday 13 August the lobby of the hotel was filled with a delegation of believers who had come to announce just such a thing. There were 28 of them, ten from South Africa and the rest primarily from the United States. They could be identified by their matching t-shirts, which contained bold blue writing against a white background. “May 21, 2011,” read the first line, followed below by the phrase “Judgment Day”. Underneath that were the words “Family Radio,” and then an injunction: “Read the Bible!”

Strangely – or not, depending on where you stand on the fate/coincidence continuum – the first member of the delegation that The Daily Maverick bumped into on Friday morning turned out to be none other than Johannes Cotezee, the Nelspruit resident we’d interviewed telephonically back in January. Coetzee had helped us better understand his organisation after reading our original article, “Only 501 shopping days to Armageddon” (published January 5), and, given that we’d already been warned by his fellow believers (see “Doomsday cultists warn The Daily Maverick”), his candid answers facilitated a more detailed follow-up, “Doomsday cult expands: SA, Africa and beyond” (published January 11).

Coetzee was as helpful in person as he’d been on the phone. He thanked us for the coverage and promptly took it upon himself to introduce us to his compatriots. The first person we met was Phillip Basi from Richmond in KwaZulu-Natal, a man who’d been a pastor in his church before tuning into the message of Family Radio on the AM frequency.

“I heard the truth from the Bible,” Basi told us, “which I never heard in my church. I made a choice for the truth. The Bible has given us proof of what is actually the word of God.”

Asked where he’d be and what he’d be doing come 21 May next year, Basi said: “Carrying on with my preaching. I don’t have any plans beyond that date. This will be the new Earth forever. Satan and his angels will be destroyed. Even Satan knows now.” To underline his point Basi then quoted scripture, specifically Mark 13-32.

As was pointed out in The Daily Maverick’s earlier articles, the precise date for the End of Days was calculated some years ago by Harold Camping, the founder of Family Radio and the spiritual head of the organisation. Camping, a resident of San Francisco, arrived at 21 May 2011 by using a version of numerology that links numbers in the Bible to their specific thematic context, and although he’s been wrong before – 6 September 1994 was his previous End of Days – neither his standing nor the size of his following seems to have been compromised by the mistake.

In fact, the piece The Daily Maverick ran on 21 May 2010, “It’s all over in a year: May 21st 2011 doomsday cult rocks on,” noted that Family Radio broadcasts in 48 languages to every continent on Earth. We reported then that the organisation was looking for people to help them expand their broadcast range into Arabic, Armenian, Creole, Khmer, Sindebele, Northern Sotho, Sesotho, Shona, SiSwati, Tswana, Xhosa and Zulu. At the time of this writing, less than three months later, Family Radio has upped its total to 53 languages, Zulu included.

So while its impossible to give an exact or even an approximate figure for Camping’s follower base – the standard refrain is that Family Radio has “listeners” not “members” – it’s safe to say that there are a lot. And it’s probably also safe to say, taking into account what we observed on Friday, that the majority of them are like Olive Smith from Nelspruit: evenly spoken, friendly to the point of gracious, unshakably certain. “Today is exactly 40 weeks left,” said Smith, smiling broadly.

Nora Rodrigues, who was born in Peru but has lived in the United States since 1981, has been listening to Family Radio for 22 years. A diminutive woman with a smile as wide as Smith’s, she informed us that Family Radio takes no advertising – all its revenues are based on donations, she said. Standing beside her was Zamikhaya Tiwani, a 30-year-old from Nyanga in Cape Town, who told us: “When I discovered Family Radio, it was a breakthrough for me. I had a lot of problems with the churches. As a member of the church, you’re not following the true doctrine.”

This message was echoed by the group leader, Barry Persaud from Georgia in the US, whom we’d been waiting to speak to since arriving at the hotel. “God has revealed to us that the church age is over,” said Persaud. “God doesn’t use the churches anymore. The church cannot save us, only God can. God has removed the life from the churches, Satan rules in them now. The ministers act like ministers of God, but they are ministers of Satan. The ministers are deceived because Satan is a master deceiver.”

Fair enough, but if even men of the cloth are so deceived, what does an ordinary mortal have to do to be saved? “We don’t do anything,” said Persaud, “except beg God for mercy.”

On the surface, then, Family Radio is a benign cult, an organisation that barely warrants the moniker “cult” at all. Harold Camping isn’t Jim Jones or David Koresh, when he was last proved wrong he didn’t demand the mass suicide of his acolytes. Neither has there been evidence of illegal or depraved sexual activity within the organisation; any proof that the act of listening to Family Radio might be harmful in itself has not been forthcoming. Granted, the 28 volunteers that arrived at the Devonshire on Thursday 12 August all came on their own time and at their own expense, but if Camping – an octogenarian – is in it for a cut of the donations, there hasn’t been much to back up that allegation either.

Simply put, these are just a bunch of people who completely believe that the world is going to end next May. The obvious question – what if doesn’t? – is irrelevant to them. On May 22 next year, if they wake up and the world is in the same shape it’s always been in, they will in all likelihood do what they did on 7 September 1994: assume that Camping got his calculations wrong and wait for him to work out the correct date.

Needless to say, however friendly they are, they are also people with a poorly developed sense of irony. As they split up into groups of three or four to spread the word around Joburg, we decided to follow the group that was going to Wits University, the city’s home of such anti-theocratic concepts as logical positivism and dialectical materialism. How would the students there react to pamphlets (they’d printed around 200,000) that explained, amongst other things, why the apocalyptic passages in the Book of Revelations were shortly to come to pass?