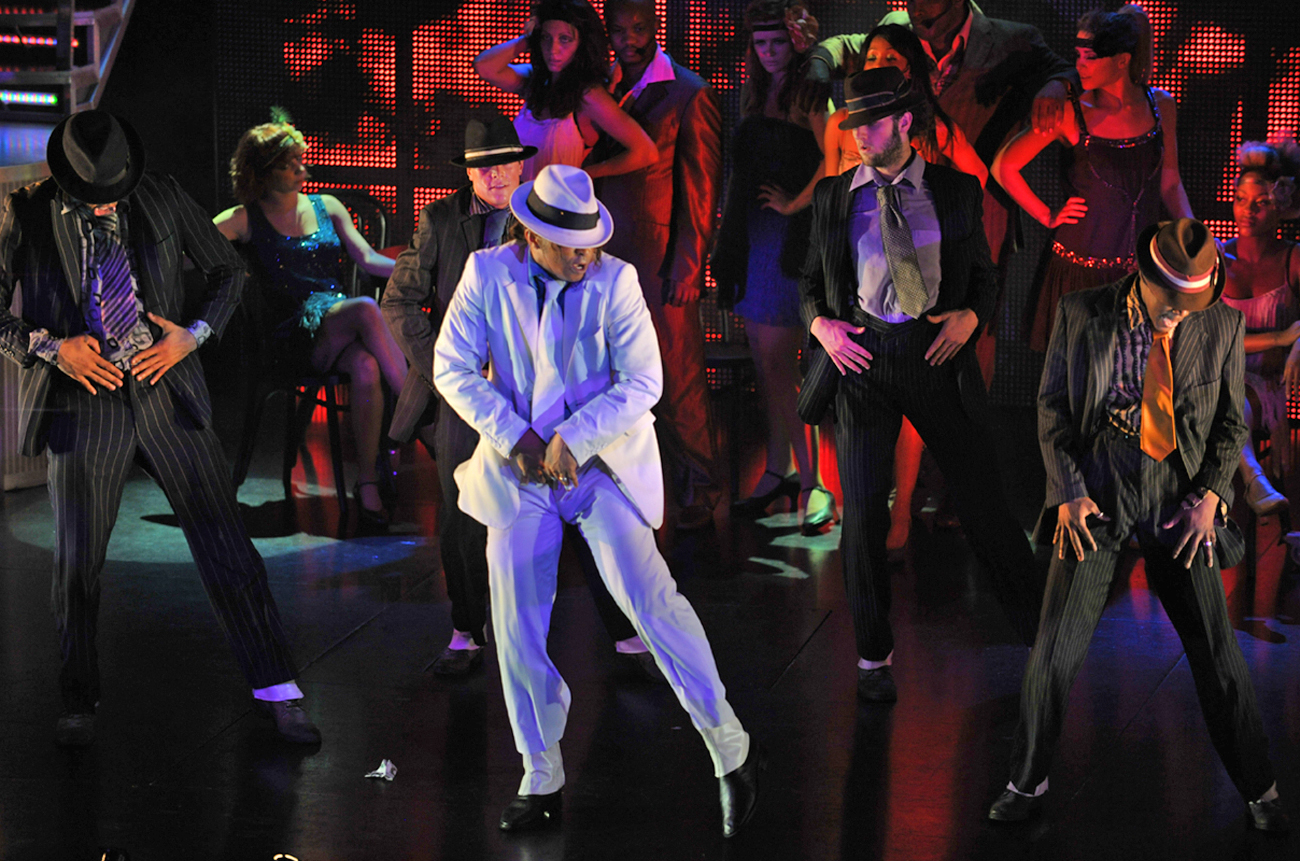 How many people does it take to play Michael Jackson?

In “Thriller Live”, now playing at Montecasino, seven different people play the king of pop. There’s a teenage Michael, a female Michael, an assortment of fatter and thinner Michaels, and finally a character who mimic’s Michael’s moves perfectly.

Yet even the combined efforts of seven surrogates is way less electric than Michael on his own, emphasising just how brilliant the real deal was. But since we’re never going to see him perform live again, “Thriller Live” is a pretty good substitute.

The show starts a fraction slowly, and during the first half, the absolute highlight is the breakdancers, lending a few flashes of brilliance to the dance routines. The choreography doesn’t try to push any boundaries, and that’s probably the key missing element. Anyone who saw the movie “This Is It” watched Michael preparing for a comeback concert, and what a truly spectacular show that would have been. Everything was going to be bigger and bolder, more daring and dynamic than ever, with a cast of dancers drawn from the most talented and glamorous in the world. In “Thriller Live” we have ordinary people trying to recreate an extraordinary man. Which means there’s an aura and charisma missing, a lack of tingling electricity. The presentation is impressive, with a live band behind sliding doors, and lighting panels showing old photos and flashing dancers. There are acres of glittery costumes and crotch-grabbing dance routines – mainly by Zoe Birkett, the female Michael.

There’s no storyline as such, just a few spoken sentences and statistics flashing on the screens as we follow the time line of his songs. We start with the young Michael, excellently portrayed by 14-year-old Jordan Bratton. Perhaps the most important thing is for the multiple Michaels to sound like the original, and they definitely do.

The choreography gets more exciting and experimental in the second half, especially when Ricko Baird finally arrives. He’s the one who’s got those Michael moves off pat after being a front dancer on one of his tours.

By now I’m mesmerised. He’s got the looks, moves, magnetism and sheer showmanship to take us through “Smooth Criminal” and “Billie Jean” superbly. And that moonwalking trick is just astonishing.

“Thriller” itself finally comes amid a series of expected encores, when I’ve begun to fear they aren’t brave enough to tackle this all-time classic. Ricko enters dressed exactly like Michael in the original spine-chilling video. The ghouls shuffling on stage look pretty wicked too. Yet their dancing is a little too lithe for rotting corpses, so overall it’s nowhere near as stunning or as scary as the original. Which is a good thing really, so you can sleep that night with great tunes in your head instead of fiendish graveyard nightmares.

It’s odd that the entire show isn’t built around Ricko, yet he’s on stage so infrequently that perhaps he charges by the minute and would break the budget. Or maybe that would make this too much of a pure tribute show where one man pretends to be another. This way, no one is claiming to be the man himself, leaving the songs open for interpretation rather than exact mimicry. And that’s a good thing given the massive gap between nicely talented and outright genius.

But enough of this nit-picking analysis. Switch off your brain, switch on your clapping, singing, dancing party mood, and you’ll have a wonderful evening.

“Thriller Lives” runs at Montecasino’s Teatro until 5 September before moving to Cape Town’s Grand West Arena from 9 to 12 September.