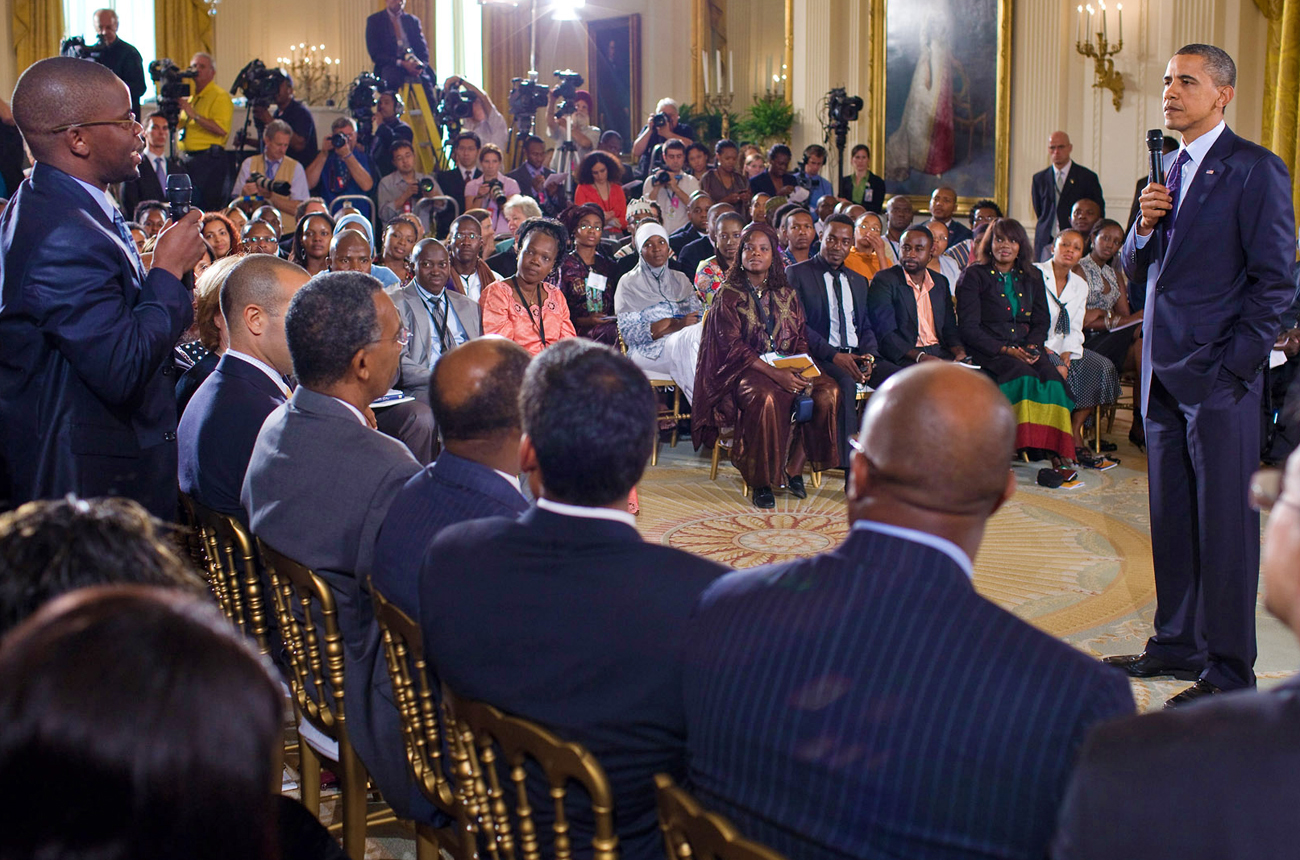 The open spigot of cash may not be there, but a lot of love is going around – and perhaps some public respect too. As part of the 50th anniversary of independence of 17 African nations, US President Barack Obama met with 115 young leaders from 46 sub-Saharan nations at the White House on Tuesday.

The gathering of mostly business figures and social and cultural entrepreneurs offered a high-profile, public dose of Afro-optimism, drawing force from the fact that Africa is a continent with a huge youthful population looking for new leadership and new opportunities.

Speaking to the gathering, Obama drew upon feelings, already expressed in his books, “Dreams from My Father” and “The Audacity of Hope” and in his speech in Accra, Ghana in 2009, of the need for the next generation of Africa’s leaders to sweep away the culture of the “big men” and unleash economic opportunities for future generations. On the eve of his 49th birthday, Obama told his guests: “If all you are doing is talking to old men like me, then you are not reaching the people who are going to be providing the energy, the new initiatives, the new ideas.

“As I said when I was in Accra last year, I don’t see Africa as a world apart. I see Africa as a fundamental part of our interconnected world.  Whether it’s creating jobs in a global economy, or delivering education and health care, combating climate change, standing up to violent extremists who offer nothing but destruction, or promoting successful models of democracy and development – for all this we have to have a strong, self-reliant and prosperous Africa.  So the world needs your talents and your creativity.  We need young Africans who are standing up and making things happen, not only in their own countries. but around the world,” Obama said.

In responding to questions, Obama said the behaviour of Zimbabwe’s Robert Mugabe had been “terrible” and that the ethnic violence in Somalia was “heartbreaking.” But, true to his Afro-optimism, Obama said, “We are rooting for your successes, and we want to work with you to achieve that success. But ultimately, success is going to be in your hands.”

This spirit clearly reaches back to Obama’s Accra speech when he told his audience Africa’s future belongs to Africans. And it is easy to see more than a little of the influence of a thinker like Ralph Waldo Emerson (as in his essay, “Self Reliance”) in Obama’s own thinking about Africa and its problems and possibilities. Emerson wrote: “It is easy to see that a greater self-reliance must work a revolution in all the offices and relations of men; in their religion; in their education; in their pursuits; their modes of living; their association; in their property; in their speculative views.”

The US state department described the forum as “an opportunity to deepen and broaden our understanding of the trajectories of African societies, and to reflect on how the next generation are building their communities’ and their nations’ futures.” And besides the White House meeting, the schedule calls for small-group discussions on transparency and accountability, job creation and entrepreneurship, rights advocacy and the use of technology to empower individuals and communities. Organizers obviously hope participants will seize the initiative and build on the relationships they make at the three-day gathering for future, independent action.

As Obama described his vision: “I also want to make sure that all of you are having an opportunity to meet each other, because you can reinforce each other as you are struggling and fighting in your own countries for a better future.  You will now have a network of people that help to reinforce what it is that you’re trying to do.  And you know that sometimes change makes you feel lonely.  Now you’ve got a group of people who can help reinforce what you’re doing.”

Shamima Muslim, a Ghanaian talk-show host, asked him, “Is America committed to ensuring a partnership that might not necessarily be beneficial to America, but [is] truly beneficial to the sovereign interests of the countries that we represent?” Obama’s answer spoke to the global economic interconnections of the wired world. “If you can buy more iPods and buy more products and buy more services and buy more tractors from us, that we can sell to a fast-growing continent, that creates jobs here in the US.”

The African Leaders Forum is actually only part of this renewed US focus on Africa. This year also marks the 10th anniversary of the African Growth and Opportunity Act (Agoa). The law was passed by Congress in 2000 to remove import duties on African products and increase exports from Africa into America.

Thus African trade, commerce and finance ministers are in Washington for the ninth annual Agoa forum. This year, while there is the obligatory Washington gabfest, the visitors will also go to Kansas City to mingle with American business leaders and representatives in “the heartland” to jump-start additional export opportunities. Then there is also an African Women Entrepreneurs Forum recognising that the way forward for job growth is with small enterprises,  often started or managed by women.

However, most eligible African exports still come from the petroleum sector, mostly from a small group of countries on the west coast of the continent that are less than representative of the rest of continent or its troubles. But among non-oil exporters, South Africa leads Africa in the value of its exports to the US arriving duty-free under Agoa provisions.

Secretary of state Hillary Clinton reminded the conference on Tuesday of the things that remain to be done. She said: “Agoa has achieved only modest results and has not lived up to the highest hopes of a decade ago….Petroleum products still account for the vast majority of exports to the US, and we have not yet seen the diversification of growth of exports that Agoa was expected to spur. So as we praise Africa’s progress, we must at the same time be clear-eyed about the challenges that persist.”

Some months ago, in a report on the future of US-Africa relations in the Obama era for the Centre for Policy Studies, a local think tank, this writer noted that people around the world – and perhaps most especially those in Africa – had taken heart from Obama’s election and that his personal impact could be powerful and positive. In putting aside military initiatives such as Africom, a key part of  “improving America’s image could also come from a relatively inexpensive investment in increasing the number and variety of international student and cultural exchanges”.

Applications of “soft power” in this way could have a major impact on Africa as a tangible manifestation of the promise that Obama, the man, exemplified in his 2008 campaign for the presidency. Moreover, in the absence of new funding for continent-spanning programmes, more modest activities may yet help deliver on at least some of Obama’s promise of hope. And, yes, it’s good to see some of it is starting to happen.

For more, read: the NPR, the AP, the VOA, the CPS study (The United States and Africa in the Obama Era), as well as various US Government sites on these projects here, here and here.