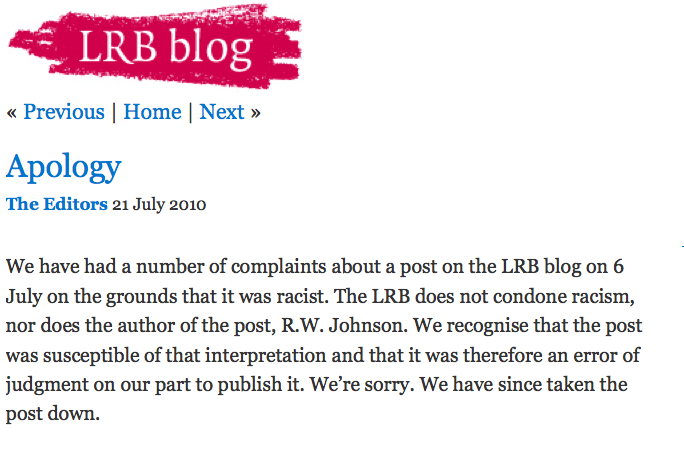 If South African author RW Johnson has ever written two consecutive paragraphs more ill-considered than these, we’d like to read them. Because the Rhodes Scholar and former director of the Helen Suzman Foundation has just been labelled a racist by 73 prominent writers and academics, and he’s got no-one but himself to blame.

On Tuesday 20 July a letter arrived in the inbox of the LRB’s editor, Mary-Kay Wilmers. It was signed by 73 prominent authors and academics – some of the more recognisable names included those of Professor Elleke Boehmer, Professor Patrick Bond, Dr Sean Jacobs, Kwame Kwei-Armah and Professor Achille Mbembe – and it stated, amongst other things, the following: “We find it baffling therefore that you continue to publish work by RW Johnson that, in our opinion, is often stacked with the superficial and the racist.”

While the complainants were referring to Johnson’s work in general, their specific objection was to an article posted on the LRB website under the title “After the World Cup”. The article appeared on 6 July and had finally been taken down after 13 days, but the URL of the vanished post suggested, ominously, that its original title had been “The Coming of the Baboons”. The New Left Project, under whose aegis the letter had been sent, kept the offending passages on file.

“We are being besieged by baboons again,” Johnson wrote. “This happens quite often here on the Constantiaberg mountains (an extension of the Table Mountain range). Baboons are common in the Cape and they are a great deal larger than the vervet monkeys I was used to dealing with in KwaZulu-Natal. They jump onto roofs, overturn dustbins and generally make a nuisance of themselves; since their teeth are very dirty, their bite can be poisonous. They seem to have lots of baby baboons – it’s been a very mild winter and so spring is coming early – and they’re looking for food. The local dogs don’t like them but appear to have learned their lesson from the last baboon visit: then, a large rottweiler attacked the apes, who calmly tore it limb from limb.

“Meanwhile in the squatter camps, there is rising tension as the threat mounts of murderous violence against foreign migrants once the World Cup finishes on 11 July. These migrants – Zimbabweans, Malawians, Congolese, Angolans, Somalis and others – are often refugees and they too are here essentially searching for food. The Somalis are the most enterprising and have set up successful little shops in the townships and squatter camps, but several dozen Somali shopkeepers have already been murdered, clearly at the instigation of local black shopkeepers who don’t appreciate the competition. The ANC is embarrassed by it all and has roundly declared that there will be no such violence. The truth is that no one knows. The place worst hit by violence in the last xenophobic riots here was De Doorns and the army moved into that settlement last week, clearly anticipating trouble. The tension is ominous and makes for a rather schizoid atmosphere as the Cup itself mounts towards its climax.”

The parallels, according to the New Left Project and the 73 signatories, were obvious: African migrants were the “baboons”; black shopkeepers were the “rottweilers”. Local literary website BookSA appeared to be first in South Africa with the story, and included in their coverage a link to an article in the Guardian newspaper published on 21 July, where Johnson professed his innocence. “I’ve only just arrived back from a trip in a game reserve and have no knowledge of this,” he wrote in an email. “I would be astonished at any allegations of racism.”

The LRB, after vacillating for a few days, issued this apology late on the afternoon of Wednesday 21 July: “We have had a number of complaints about a post on the LRB blog on 6 July on the grounds that it was racist. The LRB does not condone racism, nor does the author of the post, RW Johnson. We recognise that the post was susceptible of that interpretation and that it was therefore an error of judgment on our part to publish it. We’re sorry. We have since taken the post down.”

The question readers of the LRB, and all other interested parties, will now be asking is simple: does the phrase “susceptible of that interpretation” cut it?

The fact of the matter is that good writers – as Johnson sometimes is, irrespective of what you make of his politics – deal in analogy. Norman Mailer once said that the best way to evaluate a piece of prose is to look at the maturity of the metaphors, and it’s difficult to disagree. Was Johnson unaware that by writing about baboons and rottweilers in one paragraph and African migrants and black shopkeepers in the next he was drawing a comparison? Not likely. Is this a mature or even an acceptable metaphor? No way in hell.