Le Grand Cirque Fantazie - How do they do it?

Le Grand Cirque Fantazie – How do they do it? 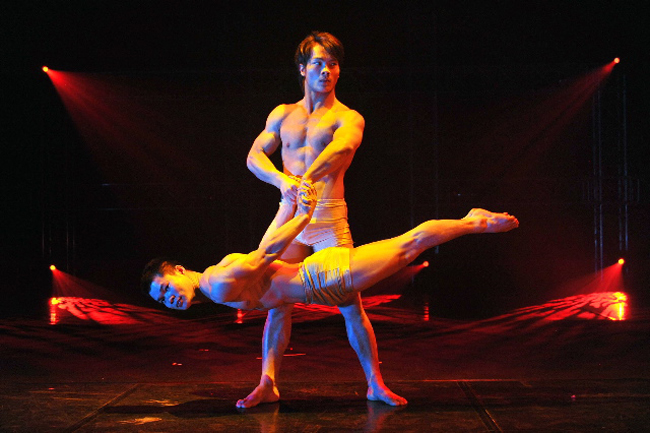 How do they tumble through hoops with perfect precision, leap from pole to pole, strike a ballet pose on their partner’s head, and do it all in skin-tight costumes - without even breaking a sweat?

Such glorious feats mean Le Grand Cirque is back in town with its new show “Fantazie”, and it’s a stunning feast of death-defying acrobatics and precision timing. Get it wrong by a nanosecond and you’d have injured acrobats everywhere.

It’s not just one man swinging from long silky curtains and performing all kinds of twists and turns. It’s four people doing it with immaculate synchronisation. The pole climbers come in multipacks too, each performing identical movements as part of one inseparable being. This new show developed from Le Grand Cirque that played a sell-out season in Johannesburg two years ago. The most popular acts are still there, along with a selection of new acts from more than 15 countries. “Fantazie” is superbly professional and absolutely mesmerising with its grand displays of easy muscular power. You’ll believe a man can fly – but only if he’s wearing pretty sequinned spandex.

It’s funny too, with the young hoop tumblers making acrobatics amusing, so you’re laughing as you’re gasping, which is difficult when you were holding your breath in the first place. It’s all performed to pimped-up classical music, with “Peer Gynt”, “Bolero” and “Night on Bare Mountain” adding another layer of class to this multifaceted show. The lighting is superb, building high drama with spotlights and colour washes in perfect harmony with the music and movements. A souped-up “Swan Lake” scene makes the ordinary ballet look almost static. And it emphasises that these performers are all world-class athletes and acrobats. As each act performs there’s always someone shimmering and sparking in the background, so you have the main spectacular event, razzle-dazzle costumes, exciting lighting and thrilling music.  There’s so much to absorb that it’s a thrill for the eyes, the ears and the imagination. There are the usual Chinese contortionists too. Well, it’s not really usual, is it – to wrap your feet around you head, but there are them in every self-respecting circus. There’s even a glamour girl in plastic orange hotpants swirling a handful of hula-hoops around her. That attracted a disproportionate volume of clapping from the men in the audience and I don’t think it was her athleticism they were applauding. If hula-hoop dexterity can give you a sexy bod like that, I’m popping out to get me some.

There’s real circus feel to the show, with a bit of vaudeville, some audience interaction and a hefty dose of glamour. There’s a clown too, in the form of a mime artist who introduces the acts without speaking a word. Yet this is no ordinary slapstick clown. He’s a strongman and an acrobat, and a man who can disappear inside his own balloon. No really – his fabulous balloon trick will blow you away. It’s a spectacle that will entertain an educated audience as well as wide-eyed newcomers. Book a seat, even if you think it sounds expensive. Tickets start from R186, so with 50 characters in the show that’s only R3.72 for every acrobat, and that’s a ridiculous bargain.