Obama speaks to South Africans on Al Shabaab, the Sudan...

Obama speaks to South Africans on Al Shabaab, the Sudan, the World Cup and self-reliance 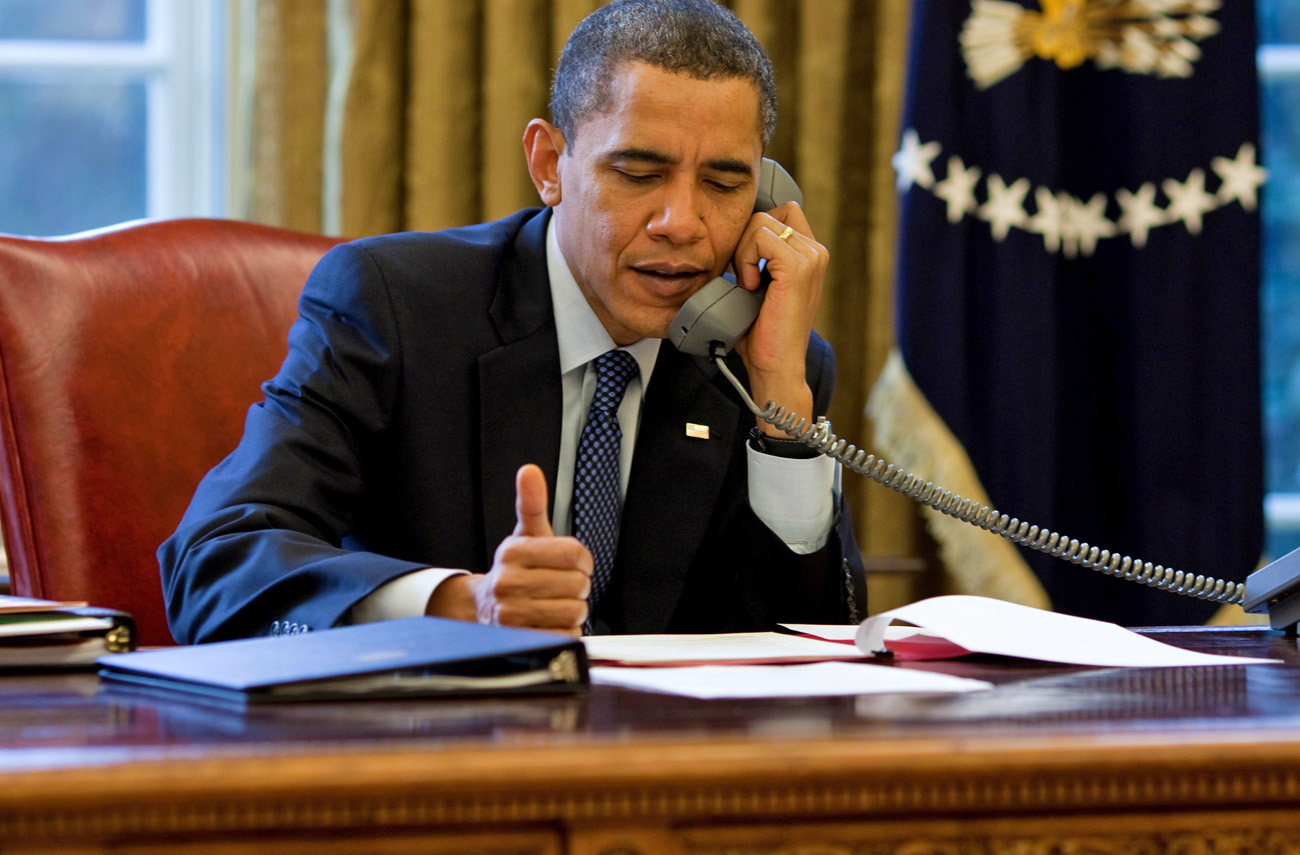 On Wednesday night, SABC3 scored a major win by screening an exclusive interview with Barack Obama. It’s a pity – no, it is beyond comprehension – that the editors felt the people of South Africa would prefer seeing rehashed videos of the World Cup and Ugandan explosions, instead of watching Obama talk.

South Africans heard (and mostly saw) a special one-on-one conversation (recorded on Tuesday in Washington) with US President Barack Obama on their television sets on Wednesday night. Obama spoke to the SABC’s New York correspondent Sherwin Bryce-Pease about the bombings in Kampala, the situation in Sudan, America’s role in the fight against HIV/Aids worldwide, and his feelings about the just-concluded World Cup. Obama also reached back to reiterate his feelings about Africa’s need for more self-reliance he had espoused in his book, The Audacity of Hope, and reaffirmed in his speech in Ghana last year.

Speaking about Al Shabaab’s claim of responsibility for the Kampala bombings, Obama said: “we are going to redouble our efforts, working with Uganda, working with the African Union, to make sure that organisations like this are not able to kill Africans with impunity.” Obama made it clear he saw the bombings as tragic and ironic, taking place just as Africans

Obama warned that if Al Shabaab gained strength, it would continue to export violent acts throughout Africa. Dealing with this calls for a multinational response to help the AU put Somalia on a “pathway that provides opportunity for people, as opposed to creating a breeding ground for terrorism”.

Obama reminded viewers that the real struggle is not with Islam, per se, but with a kind of radical Islam that “says that any efforts to modernise, any efforts to provide basic human rights, any efforts to democratise are somehow anti-Islam.” Thus, organisations like Al Shabaab have a disregard for African life, seeing Africa as a “place where you can carry out ideological battles that kill innocents without regard to long-term consequences for their short-term tactical gains.”

Instead, Americans and Africans must focus on a realistic development agenda, drawing lessons from the success of nations like South Africa that are

…trying to move in the right direction, that have successful entrepreneurs, that have democracy and have basic human freedoms – that we highlight those as an example whereby Africans can seize their own destiny, and hopefully the United States can be an effective partner in that.

Obama stressed that while poverty alleviation is important, a flawed ideology like Al Shabaab’s must be rejected as well – especially by young people who can be attracted by such misguided ideologies.

Turning to Sudan, Obama stressed that the government, there, needs to cooperate with the International Criminal Court, especially given its arrest warrant against Omar al-Bashir. As Obama said, “We think that it is also important that people are held accountable for the actions that took place in Darfur.” For Obama, this becomes even more important as the southern Sudan moves towards possible independence in 2011.

During the broadcast interview, Obama was clearly pleased to be able to congratulate South Africa for its successful hosting of the World Cup, adding that he had not been one of those Afro-pessimists. I had confidence that this was going to be a success.

Reaching back to the recurring theme he had first set out in The Audacity of Hope, Obama reiterated that, yes, Americans can partner with Africans

…but ultimately, on whether it’s issues of eliminating corruption, ensuring smooth transitions of democratic governments, making sure that businesses are able to thrive and prosper and that markets are working for the smallest farmer and not just the most well-connected person – those are issues that Africans can work on together. And in terms of my orientation working to help in Africa’s development, we want to provide resources, but we want to partner with those who are interested in growing their own capacity over time and not having a long-term dependency on foreign aid.

And of course, given a chance to congratulate Nelson Mandela on his 92nd birthday, Obama added his voice in praising the former president for his standard of leadership and in being an exemplar for the continent.

In a lighter moment, in speaking about the World Cup, Obama agreed that although soccer is not America’s national game, the USA team had turned in a credible performance – and that Obama’s own daughters, just like millions of other US children, play soccer at school.

When Obama’s interviewer directed the conversation towards HIV/Aids and a perception the US is slackening in its commitment to Pepfar (the President’s Emergency Plan for Aids Relief), Obama said, no, America remains squarely in the fight, even if the rate of increase in funding support has slackened. Obama used the conversation to underscore important American budgetary realities:

I promise you when I’m fighting for that budget here in the United States, people don’t see it as a decrease. They see it as an increase. They understand we’re putting more money into it, and it’s the right thing to do.

But, just as importantly, now

We’re not just treating the disease itself, but we’re also doing a much better job in terms of general public health so that fewer people are getting infected in the first place.

Curiously, in broadcasting the real drama of a foreign head state participating in an open Q&A, unfathomably, the SABC chose to insert stock images from the World Cup and the aftermath of the Uganda bombings into its broadcast interview – turning Obama into a kind of a voiceover artist for this off-the-shelf footage. Did SABC management somehow believe using dusted-off generic video images would be more compelling than the actuality of its own, actual, exclusive, one-on-one interview with the American president?  We remain perplexed. But, then again, maybe we shouldn’t be.

Read more on Al Shabaab: AP, Newsweek, and a Council on Foreign Relations special study. For the full text of Obama’s interview, see the US Embassy website.