Violence finally strikes the World Cup on the final day... 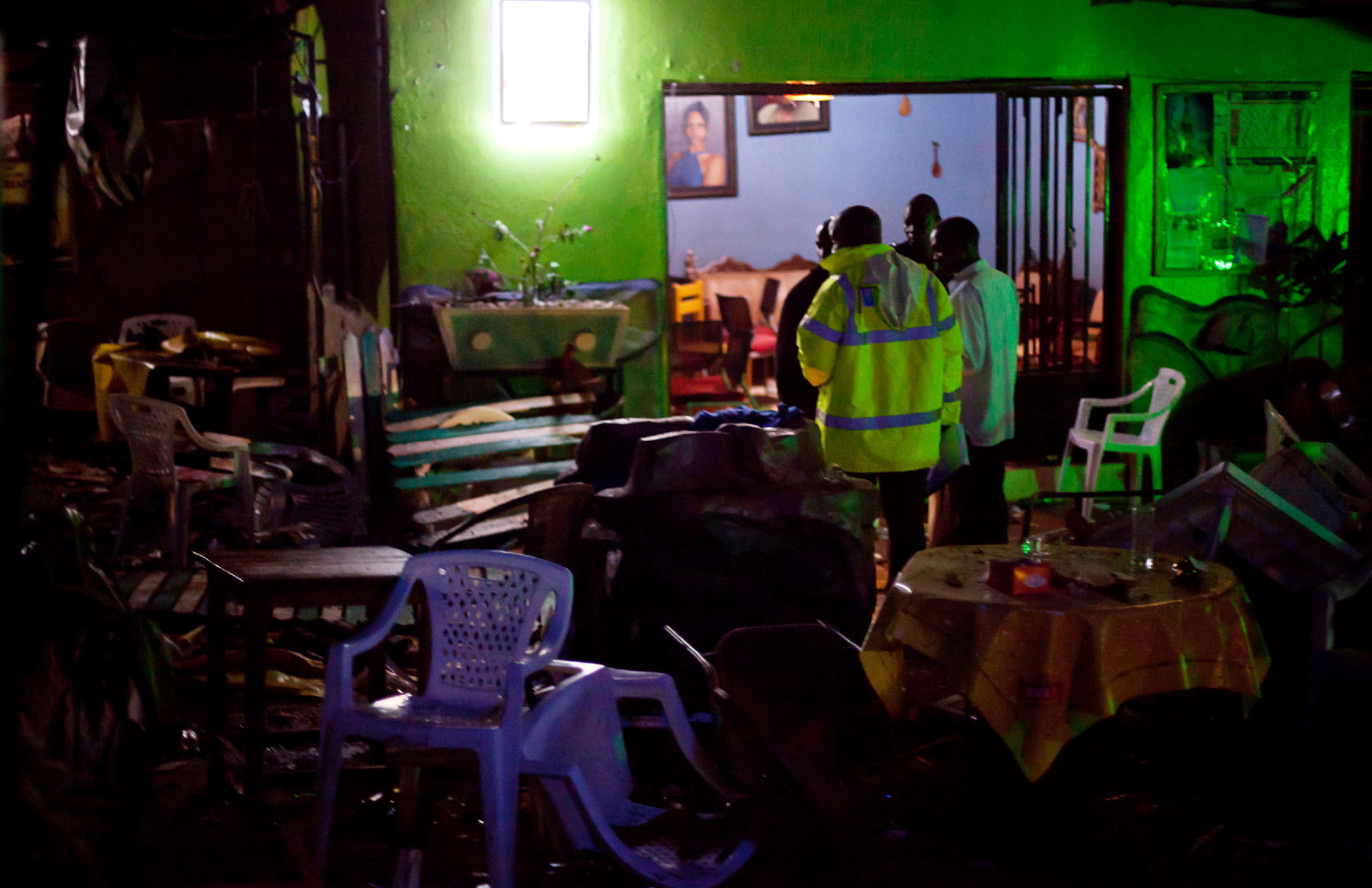 Around the world, an estimated 700 million people peaceably watched the final round match-up between Spain and the Netherlands on television from Johannesburg's Soccer City stadium, apparently totally without incident. Except, alas, in Kampala, Uganda. As hundreds of Ugandans gathered in a popular Ethiopian-style restaurant and a sports club to watch the match on large outdoor television screens, bombs at both venues killed at least 64 people and wounded many more.

The two bombs went off at 10:30 in the evening, local time, right in the middle of the game, killing their victims as they sat in the outdoor garden of the restaurant or as they had gathered to watch  the match at the rugby field. Besides Ugandans, the victims included Ethiopians, Eritreans, an American aid worker and an Indian national.

The Ethiopian restaurant may have been targeted because of that country’s intervention in Somalia several years ago. Bereket Simon, the Ethiopian government’s information head said: “This is a cowardly act by Al Shabaab terrorists.” Ethiopia had sent troops into Somalia between December 2006 to January 2009 to support Somalia’s fragile government against an Islamic insurgency, although it later withdrew its troops in a peace deal brokered by the UN.

While detailed information on the victims was still scarce, it is already known that the US victim was a volunteer with a group assisting former child soldiers who had been liberated from Joseph Kony’s Lord’s Resistance Army (LRA) rebel group. The aid NGO said on its website of Nate Henn, the dead American, that “From traveling the United States without pay, advocating for the freedom of abducted child soldiers in Joseph Kony’s war, to raising thousands of dollars to put war-affected Ugandan students in school, Nate lived a life that demanded explanation. He sacrificed his comfort to live in the humble service of God and of a better world, and his is a life to be emulated”.

Ugandan police have told the press that although no group has yet claimed responsibility for the attacks, they suspect that the militant Islamic group, Al Shabaab, based in neighbouring Somalia may have been responsible. However, some police sources also said that other suspects could be former rebels from the Democratic Republic of the Congo who have connections to Ugandan groups.

At this point, Ugandan security sources were still reluctant, formally, to charge any group as being responsible for the attacks, although Ugandan police inspector general, Kale Kayihura, did say, “We can’t rule anything out. This was obviously terrorism, from the way it was targeted at World Cup watchers in public places.” And Ugandan army spokesman Felix Kulayigye added, “We suspect it’s Al Shabaab because they’ve been promising this for long”. Experts note that twin coordinated attacks have been a hallmark of Al Qaeda and groups linked to it, just like Al Shabaab.

Al Shabaab has been fighting to gain control of Somalia; it bans music, dancing and sports; and is reported to be linked to Al Qaeda. In the past, Al Shabaab has issued threats against Uganda and Burundi because both nations have contributed troops to the African Union peacekeeping mission in Somalia. Nations in the region are now preparing to send an extra 2,000 peacekeepers to Somalia and that would bring the total number of African Union troops in that fractured nation to over 8,000. Al Shabaab has responded to troop deployments by urging Muslims to join a jihad and pledged to attack before being attacked. Perhaps crucially, Uganda is also expected to host an African Union ministers’ meeting next week.

Over in Somalia’s capital, Mogadishu, an Al Shabaab commander, Sheik Yusuf Sheik Issa, told the press that he was pleased with the Kampala attacks but he refused, specifically, to confirm or deny responsibility by Al Shabaab. The AP quoted Issa saying, “Uganda is one of our enemies. Whatever makes them cry, makes us happy. May Allah’s anger be upon those who are against us.” Isse went on to say, “We know Uganda is against Islam and so we are very happy at what has happened in Kampala. That is the best news we ever heard.” The bombings came just after another Al Shabaab commander in Somalia, Sheik Muktar Robow, had specifically called for militants to attack sites in Uganda and Burundi.

In Washington, just hours after the attacks, White House spokesman Tommy Vietor said the United States was prepared to provide assistance to Uganda to deal with the aftermath of the bombings and that US was ready to help Uganda hunt down those responsible. Vietor said: “The president is deeply saddened by the loss of life resulting from these deplorable and cowardly attacks, and sends his condolences to the people of Uganda and the loved ones of those who have been killed or injured.”

Until Sunday, in recent years at least, Uganda had generally been able to avoid the violence and terrorism that has afflicted other East African nations, although the country has had to cope with the LRA’s long-running insurrection that once had fielded thousands of fighters. However, the LRA has  now melted away to just a group of several hundred fighters, living deep in remote parts of the Congo, Sudan and Central African Republic.

Picture: Police inspect the wreckage of the Ethiopian Village restaurant in Kampala after the blast there. (AFP/Trevor Snapp).