The World Cup Day that was: 11 July

The World Cup Day that was: 11 July 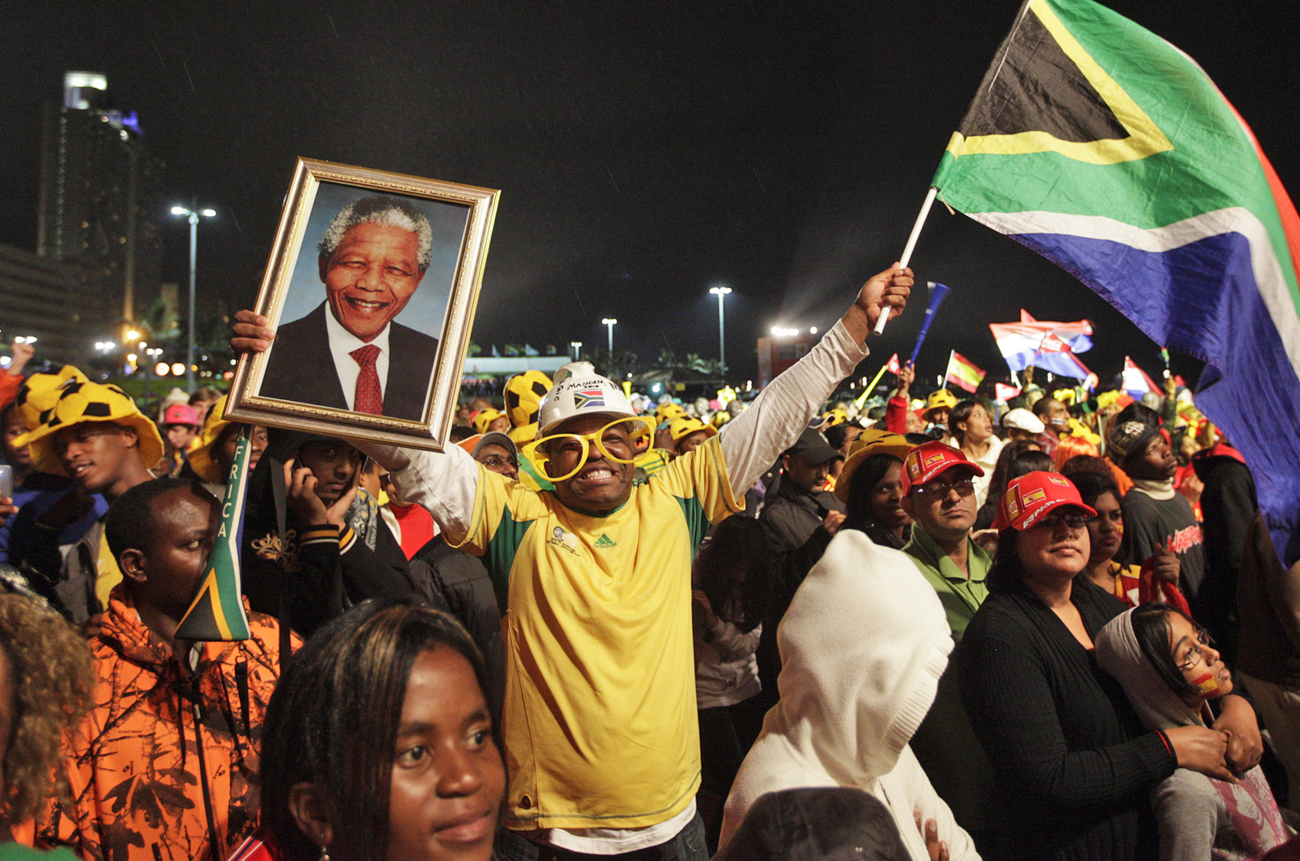 Former president Nelson Mandela was the star of the closing ceremony – although a couple of herds of puppet elephants almost stole the show. Mandela, who was not on hand later in the evening to hand over the World Cup trophy, nevertheless put in an appearance – touring the Soccer City pitch in a golf cart. Other than this surprise performance, the closing ceremony itself was pretty predictable, with Shakira and Freshlyground belting out Waka, Waka, gumboot dancers who looked like they’d been dressed by Pringle, and some fancy holograms showing scenes from matches throughout the tournament. But lifting the occasion above the ordinary were the elephants, with their puppet masters excelling at portraying their loping gait. And that baby elephant was damn cute.

An unidentified fan ran onto the pitch just before the World Cup final was about to start at Soccer City. The fan began his dash just as the soccer players and dignitaries, including President Jacob Zuma and Fifa president Sepp Blatter, were about to walk onto the field. His goal appeared to be grabbing the trophy, but he was tackled by security guards seconds before he could get his grubby hands on it. Looks like Johannesburg World Cup special court will still have at least one case to wrap up on Monday morning.

Paul the psychic octopus was right, again. Spain emerged the victors in extra time in the 2010 World Cup final on Sunday night, with Iniesta finally slotting one home just minutes before the game would’ve gone to penalties. The Dutch played a very physical game, resulting in one of the dirtiest finals we’ve seen for a long time. Spain were hampered by The Netherlands’ tactics but, in the end, flair won out over brute force, which should make soccer lovers everywhere very, very happy (unless they have a particular fondness for the colour orange). As well winning the tournament for the first time, Spain are also the only team ever to have won a World Cup after losing their first match, and the only European team ever to have won the trophy outside of Europe. The win meant we finally got to see Spanish coach Vincente Del Bosque crack a half smile at the end of the match, and later on in the proceedings he was even spotted grinning. Viva Espana!

English referee Howard Webb’s wife said last week of his officiating: “I don’t know how he does it… He can’t take charge of his own children. I don’t know how he manages it on a football pitch.” Well, last night Webb didn’t manage so well, although given the on-pitch tension, there wasn’t really much the referee could do to keep control of the situation. The World Cup final saw a record 14 yellow cards being handed out (nine to the Dutch, five to the Spaniards), with the biggest surprise being that only one player was sent off, The Netherlands’ Heitinga. Perhaps the nastiest foul was committed by de Jong on Xavi Alonso, when he stuck his studs into his chest. As The Telegraph remarked: “If Webb had been on duty with the South Yorkshire police he’d have arrested him — it wasn’t a challenge, it was assault.” Luckily the match ended without anyone being seriously injured, but there’ll be more than a few bruises on Monday morning.

The Guardian, The Telegraph

Germany’s Thomas Mueller picked up the Golden Boot award for his five goals in the tournament. He beat Spain’s David Villa, The Netherlands’ Wesley Sneijder and Uruguay’s Diego Forlan, who were all also sitting on five goals, because he had contributed more assists. Mueller was also awarded the best young player of the tournament. Forlan didn’t go home empty-handed, as he was awarded the Golden Ball, for the best player of the tournament. Spanish goalkeeper Iker Casillas won the Golden Glove, and although his team’s victory will mean a lot more to him than the individual honour, he certainly deserves it.

Photo: A soccer fan holds a portrait of former South African president Nelson Mandela ahead of the World Cup final match between Netherlands and Spain at the fan park on the beach in Durban July 11, 2010. REUTERS/Rogan Ward