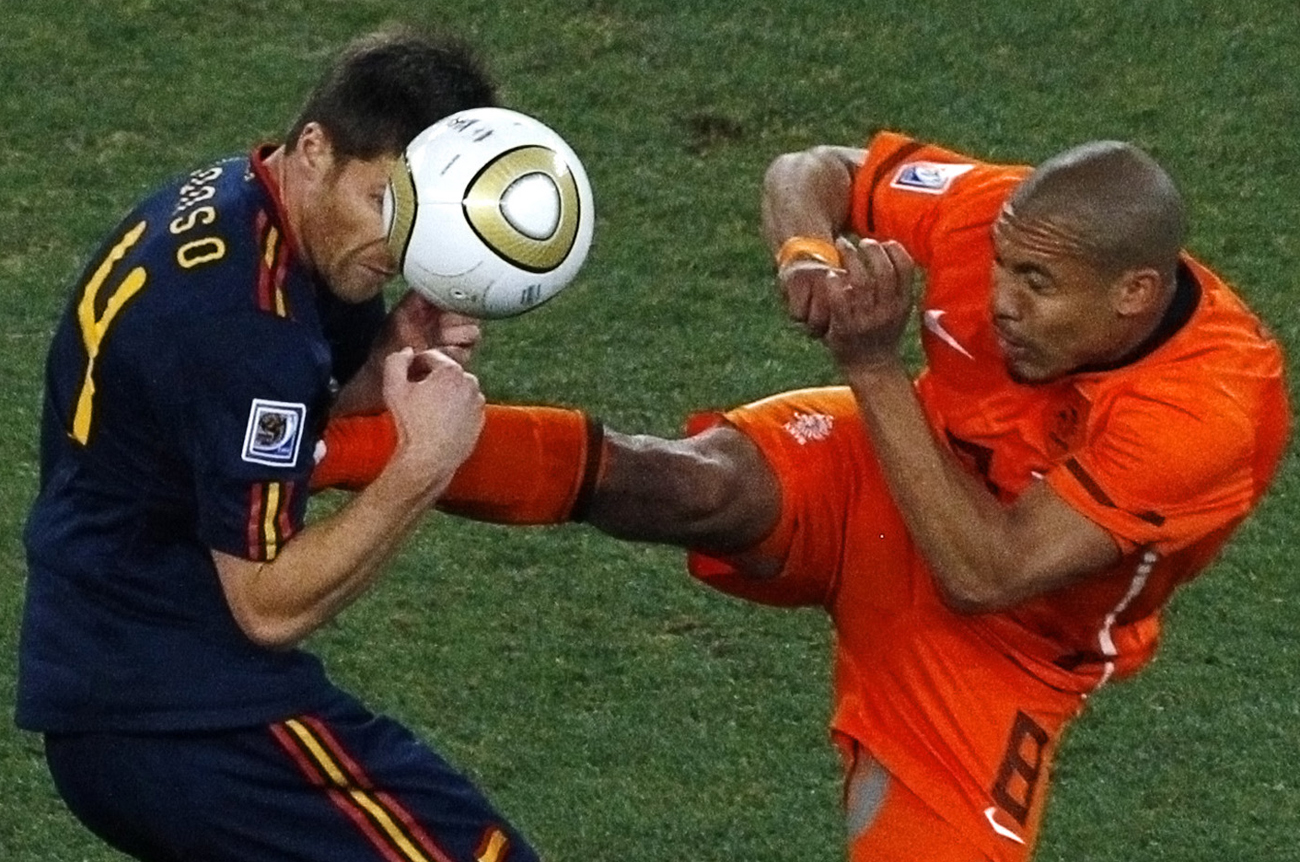 That the Dutch qualified for the World Cup final was more proof that a game played by cyborgs and drones can almost get you to the top. But once you get there, you actually need to score and play the game to win. The Dutch came to the game on Sunday night with a clear strategy of roughing up the Spaniards to the point where they lose concentration and make mistakes – that would then be taken advantage of to spur fast counter-attacks, mostly by Robben.

The Netherlands have probably recorded the all-time record for dirty play in the final of any world-class competition after picking up nine yellow cards and one red card. The Dutch holding midfielders van Bommel and de Jong must rank as the dirtiest players seen in a long time. The world probably hasn’t seen such brazen disregard for everything on which the most beautiful game is built since the Italian fullback Gentille annihilated Maradonna and Zico in 1982 World Cup. Beauty, honesty, fairness, and tackling the ball and not the opposing player, were qualities completely unknown to most of the Dutch team on Sunday night. Spain’s players were not playing only for Spain; they were playing for the rest of the world. They  managed to almost stay cool after a series of horrific tackles by the Dutch. They played their own game for the entire 120 minutes, proving that soccer belongs to the brave and honest. Although the importance of this game could not have been underestimated, they still played the game to please the eyes of their followers around the world. The midfield players, Xavi, Xabi Alonso, Bousqet and more than anyone else, Iniesta, bore the brunt of most of the Dutch violence, yet they managed to control the game beautifully. The little magician, Iniesta, supplied the aficionados of soccer with beautiful little nuggets of artistry while playing hide-and-seek with the Dutch brutes.

Seeing Iker Casillas lift the World Cup 2010 trophy felt as though a gigantic justice has finally been done. Their win will send seismic waves through the world of soccer, being the best advocate for the game to go back to its roots and banish the negativity and rot out to where they belong in the dark recesses of soccer history.

To the Dutch: you may want to research your history and find out why the once the most beautiful teams in the world, Johan Cruyff’s 1974 and Ruud Gulitt’s 1988 squads were the most loved in the world. Perhaps you’ll find inspiration there.

Photo: A security officer catches a pitch intruder after the latter covered the World Cup trophy with a cap before the 2010 World Cup final soccer match between Netherlands and Spain at Soccer City stadium in Johannesburg July 11, 2010. REUTERS/David Gray

Man of the match:

In the first 10 minutes, the Dutch have limited themselves in trying to contain, attacking the possession, and hoping that they have an opportunity to maul the Spaniards from counter-attacks.

The Dutch have chosen to attack the Spaniards personally and they probably count on the top players being injured. This is poets versus gladiators.

The Dutch end the first half by producing only two to three minutes of positive play. For the remainder of the first half, they did their best to destroy the game. Photo: Spain’s Xabi Alonso gets a boot in his chest by Netherlands’ Nigel de Jong as they fight for the ball during their 2010 World Cup final soccer match at Soccer City stadium in Johannesburg July 11, 2010. REUTERS/David Gray