Michael Hastings, the next giant name in war reporting?

Michael Hastings, the next giant name in war reporting? 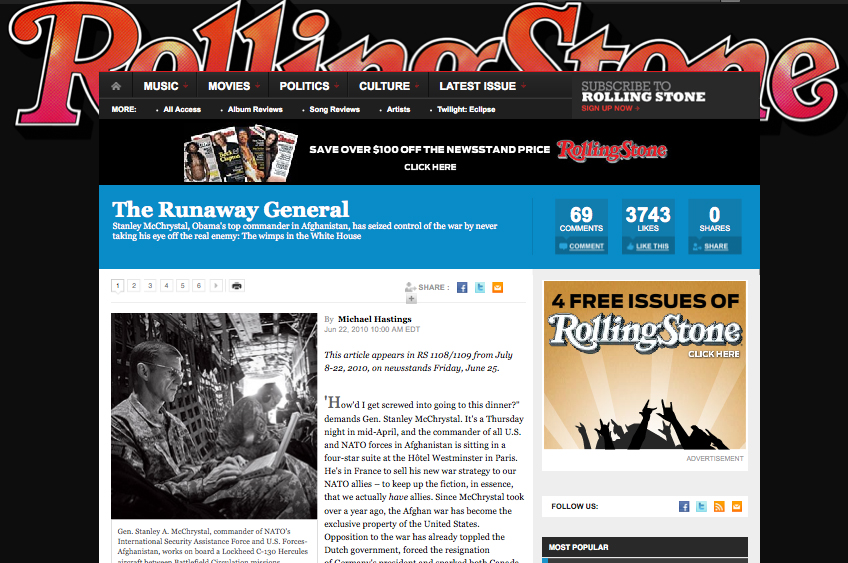 In the last few days, news has emerged that Michael Hastings, the young war correspondent who wrote the Rolling Stone piece that resulted in General Stanley McChrystal’s removal, has signed a major book deal with Little, Brown. If he doesn’t repeat his early mistakes, Hastings could become the next big thing.

In an interview with his former employer Newsweek magazine in late June, journalist Michael Hastings explained how he gained the sort of access to General Stanley McChrystal that resulted in the explosive Rolling Stone feature “The Runaway General,” a piece that eventually got McChrystal fired for insubordination and criticising the Obama administration. Hastings told Newsweek that his intention with the pitch was to investigate whether the US’s Afghan policy was working or whether it was a “totally insane enterprise,” and that a profile of McChrystal and his team would be a way to answer this question. It was a strange journalistic coincidence that resulted in Hastings spending as much time with McChrystal as he did, he said.

“The Icelandic volcano happens, and so my two-day trip turned into this month-long journey following General McChrystal and his staff around from Paris to Berlin to Kabul to Kandahar and then back to Washington, D.C. I wasn’t with him at every moment, obviously, but fairly regularly over that period of time.”

Then, in answer to the question about a night on the town in Paris, when everyone was being very candid and divulging things that should probably have remained off-the-record, Hastings said this: “Well, they were getting hammered, I don’t know at that moment if they were being the most forthright. Of course it was surprising. A lot of the reporting that is getting most of the attention happened right away in the first few days in Paris. So I was surprised – because they didn’t know me.”

They know him now. And whether they like him or not is irrelevant, because Hastings has just signed a book deal with Little, Brown and Company for a longer look at the war in Afghanistan. The size of the advance has not been made available, but given the fact that Hastings’s agent is Scott Moyers – number two man at the Wylie Agency, one of the most powerful in North America – it’s no doubt substantial.

A release from Little, Brown offered more insight into what the book, as yet untitled, will be about: “[It] will offer an unfiltered look at the war, and the soldiers, diplomats and politicians who are waging it. Based on exclusive reporting in Afghanistan, Europe, the Middle East and Washington, D.C., this landmark work of journalism will elucidate as never before our deeply troubling war in vivid, unforgettable detail.”

Given the precedent set by the Rolling Stone piece, where the magazine once again proved its ability to affect policy in America (see below for The Daily Maverick’s overview of how writers like Hunter S. Thompson and David Foster Wallace have done so in the past), the publishers probably aren’t overdoing it on the hyperbole: this is bound to be a groundbreaking work of non-fiction. But there are aspects of Hastings’s past that some members of the American media can’t help but question.

In early 2007, three weeks after his intended fiancée Andi Parhamovich, a civilian consulting with NGO National Democratic Institute in Baghdad, was killed in an ambush, Hastings signed a $500,000 book deal with US publisher Scribner. The book, titled I Lost My Love in Baghdad, was to be about the Iraqi war (Hastings was Baghdad correspondent for Newsweek at the time) as well as the relationship, and would include intimate emails and text messages exchanged between the lovers.

It was written quickly – by April 2008 there was already a review in the New York Times, penned by senior New Yorker staffer George Packer. As a more experienced and respected war correspondent, Packer was the perfect man for the job. His view of the book was twofold. The war story, he wrote, was nuanced, honest and well observed; the love story was none of these things.

“In other words,” explained Packer, “it’s an ordinary tale of inexperienced, insecure love, with the long separations and romantic, stormy reunions that can prolong relationships or just as easily end them. But because telling it takes the author to no depth of felt insight, this portrait of Andi is either unnecessary or unjust, or perhaps both. Her death doesn’t ennoble the story, because Hastings, who can convey the deadly ennui of a foot patrol in Anbar, is unable to rise rhetorically to the tragedy.”

Hastings was 28 when his girlfriend was killed. I Lost My Love in Baghdad was his first book, and the size of the advance plus the time to market says as much about the publishing industry as it does about his greenness. The Rolling Stone piece was a different matter entirely, and his second book should be too.